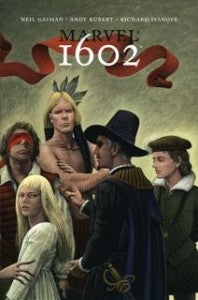 Over the past couple of years, everything Marvel Films has touched has turned to gold.  And certainly that will continue in a few months with ‘The Avengers’ hitting theaters.  We know that ‘Captain America 2’ is scheduled to begin shooting by the end of the year and that Marvel has an open slot on the docket for 2014.  So what will the mystery film be?

Rumors have circulated on an Ant-Man film. Earlier this week, we discussed the possibility of a Nick Fury movie.  But could it be that everyone is looking in the wrong direction?  Could Marvel throw a curveball and try something new like “Marvel 1602?”  Here is what Marvel Studios President told Splashpage back in 2008:

“Something like ‘1602’ I think would be really cool to do at sometime down the line. I love it. It is spectacular,” he said. “But the key to it, the fun of it, is that you need to know those characters very well. You need to know each and every one of those characters and who their present day reincarnations are in order to enjoy and understand and appreciate how Neil was able to reinvent them and do that period spin on them for ‘1602.’ If you don’t know them yet and if they haven’t had their own stories yet, I don’t think it would be as much fun. If you don’t know them well and you haven’t been introduced to them in a similar medium in their traditional environments, plucking them out of that won’t seem as unique or different.

“I’d love to do stuff like ‘1602’ or ‘What Ifs’ or something like Marvel’s ‘Earth X,’” he continued. “But somewhere down the line. You need the audience, or the movie going public to have a great understanding of who they are before you alter it like that.”

In case you aren’t familiar with ‘Marvel 1602,’ it was a limited series written by Neil Gaiman.  Marvel superheroes were transplanted back into the Elizabethan Era, where they ended up battling a mysterious force and saving the world.  Quite a few characters were featured in the series. And since Feige talked about needing them to have their own stories, let’s look at the characters.

Nick Fury: While Nick Fury hasn’t gotten a solo film, there certainly are rumors of it happening soon. Even without a Fury-led movie, fans are well aware of the character after appearances in multiple films (and in the upcoming Avengers flick).

Captain America: First movie was a hit, second will begin shooting by the end of the year.

Hulk: The most recent version, with Ed Norton, did well.  Hulk is also in ‘The Avengers.’

Thor: Crushed it at the box office.  Thor 2 has a director lined up and is gearing up.  Thor will also be in ‘The Avengers.’

Spider-Man: Multiple Spider-Man films and a reboot with ‘The Amazing Spider-Man’ coming out this summer.

Dr. Doom: He’s made a couple of pretty solid appearances.

Every one of those characters has had or will soon have appearances in multiple film. So we’re ‘down the line’ and we have ‘the audience.’  The ‘movie going public’ has a ‘great understanding of who they are before you alter it like that.’

All of Feige’s wishes have come true, so why not ‘1602?’ We can make a case that ‘1602’ could truly bring comic book movies into the mainstream. Why? Because no comic book film—outside of ‘The Dark Knight’ has even sniffed a best picture nomination.  ‘1602’ would have the elements that the Academy drool about: A period piece, British accents, and a fresh take on a story.

Of course, there is the big issue of Marvel Studios not currently owning the movie rights to some of the characters like X-Men, Fantastic Four, and Spider-Man, but it's also possible that Marvel could have worked out a behind the scenes deal with the other studios. The other studios would retain the rights for modern day versions, while Marvel would get the rights for the 1602 versions only.  What do you think?

Is A Film Adaptation of Marvel 1602 Coming Soon?