Earlier this week, DC Comics announced that Animal Man #1, arguably the most critically-acclaimed of their 52 new #1 launch titles, had gone back to presses for a third print, indicating that even after almost a full month of second issues some of the #1s were still selling briskly. That's a  bit surprising since collectors, who typically comprise a lot of the folks buying #1 issues, won't usually pick up the second printings and so one assumes that much of the current traffic is from readers--people who could just as easily have bought a digital copy if they weren't in it for an eventual return on investment. Still, it's far from the only big sales announcement this week and one has to wonder: Has increased foot traffic from DC's big initiative (and accompanying massive media push) lifted sales on non-DC books as well? 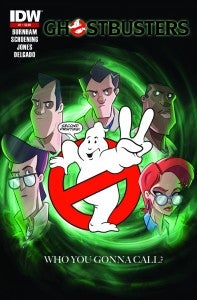 On Thursday, IDW Publishing announced that Ghostbusters #1, which hit shelves a month ago, had sold out through Diamond and would return to the presses for a second printing with a new cover (see left). According to the company's press release, "The new ongoing comic series debuted on September 28th in comic stores throughout North America, receiving glowing reviews. To meet continued demand and ensure fans everywhere have access to the comic, IDW is rushing a second printing to stores for a release date of November 23, 2011." One of those glowing reviews, of course, came from right here at ComicBook.com, where we called it "thoroughly entertaining" and gave the book an A-. Marvel Comics got a little bump, too, by many accounts. The sixth issue of Fear Itself appears to have bucked a downward trend and outsold the fifth, indicating that increased interest in comics as a result of DC's September relaunch may have helped move units of Marvel's biggest September seller as well. And even DC themselves have had a little something to celebrate beyond the New 52. The company announced Friday morning that The New Teen Titans: Games, a hardcover original graphic novel by star creative team Marv Wolfman and George Pérez and set during their legendary 1980s run on the title, has sold through its first print and will head back to presses soon. The book, which is based on a plot (and includes some pages) from the 1980s, was rescripted, completed and ushered to press 25 years after its conception and has sold briskly since its September 21 release. The creators have discussed the possibility of follow-ups if DC will allow it, and the publisher gushed on their blog that "the story and the classic characters stand out even among the groundswell of attention for our own DC COMICS-THE NEW 52."

Is The New 52 the Rising Tide That Has Lifted All Boats?