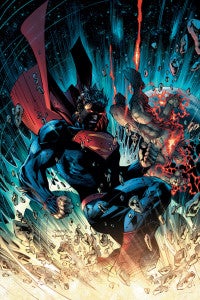 An off-the-cuff comment by DC Comics co-publisher Jim Lee has led to the publisher confirming that the first arc of Superman Unchained will be nine issues, and that the title's future beyond that point is not clear. When asked about the status of Batman: Europa, a project first announced in 2004, the Los Angeles Times added another reference to the title as a nine-issue series. "That's a project I began a while back when I was living in Italy for a year," Lee said. "It's still on deck. I've gotten sidetracked with other projects. I'm working currently on [the nine-issue series] Superman Unchained with a writer named Scott Snyder."

That quote stuck out at a lot of people, since nobody has ever said that Superman Unchained had a limited run. DC had no comment when we reached out to them but later in the day, CBR News confirmed with the publisher that while Lee and Snyder's "initial arc of the series will run for nine issues, details on the book's future past that point won't be made public until further down the line." The series, which launched in June, has had three issues released so far and is solicited through #6 in December. That gives DC two months to even have to solicit Lee's final issue, which would be released in March. The all-star creative lineup was considered a boon to Superman's comics, which hadn't been as well-reviewed or top-selling as the publisher had hoped since the New 52 relaunch. With the character's 75th anniversary and the theatrical release of Man of Steel, the character was high on the mainstream, non-comics radar.

Jim Lee Will Finish Batman: Europa After Superman Unchained--Maybe in 2014?