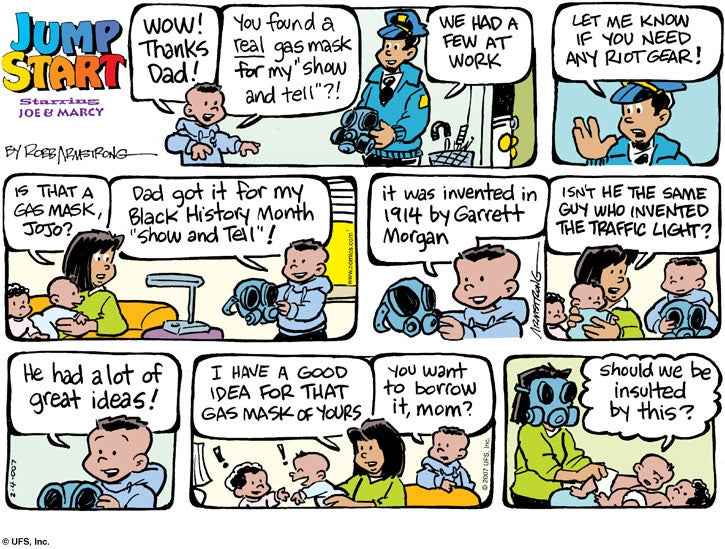 Robb Armstrong's long-running comic strip Jump Start (with Andrew Orenstein) is being developed as a sitcom at Fox, Deadline reports.

The series follows a Philadelphia cop who comes home to four crazy kids. Its family-friendly style of comedy echoes popular strips like Family Circus and Baby Blues, both of which have been adapted in animation before, although the Deadline story indicates Jump Start will be live-action.

Armstrong, who created the series, has previously said that he did so in part because depictions of young black characters in mass media are poor and he wanted to depict a more realistic family. Orenstein was a producer on Malcolm in the Middle.

Orenstein and Kaplan executive produce with Armstrong's producer Bridget McMeel of Amuse Entertainment, who brought the property to Hollywood.

The strip, which entered syndication in 1989, centers on Joe and Marcy Cobb as they try to balance the demands of work and raising their young children, Sunny, Jojo and twins Tommi and Teddy. At one point it was syndicated in over 400 papers, making it one of the most widely-circulated strips by a black cartoonist in recent memory.

Pokemon Home's 2.0 Update Has a Cool Easter Egg for Diamond and Pearl Players