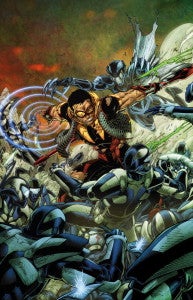 While DC is generally loathe to cancel a book without notifying the retailers of "final issue" in the solicitation text, a practice that Marvel has used a handful of times in the recent past, it appears that's what happened last month, when both Katana and Justice League of America's Vibe saw their tenth issues solicited without any such notice. Now, Comic Book Resources have confirmed that the struggling series--launched as companions to Geoff Johns's best-selling Justice League of America--will both end in December. It's assumed that both series will expand their first trade paperback collections to accommodate the shortened series all in one book. Most suspected as much after last night's solicitations for January 2014 comics failed to include the titles, but some held out hope since DC's juggernaut Superman Unchained was also conspicuously absent from the solicitations. In that case, the book is simply skipping January, presumably to give DC Entertainment co-publisher and series artist Jim Lee time to get back up to speed after the busy summer convention season and the birth of his son last weekend (that's why he wasn't at New York Comic Con, if anyone was wondering; Jackson Tiberius Lee was born on Sunday). In spite of some speculation to the contrary, series writer Scott Snyder has clarified that Superman Unchained will go on past its first arc--which will be either nine or ten issues, all featuring art by Lee--even if the artist leaves.