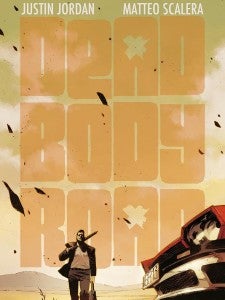 is reporting that Justin Jordan, currently working on projects at Image Comics and DC Entertainment, will launch Dead Body Road for Skybound. That explains the "Dead" teaser that Robert Kirkman presented during Thursday's The Walking Dead panel, which he said would be fully revealed at the Skybound panel. With art by Matteo Scalera, Jordan's series is described as a kind of "noir western" crime comic. Here's Jordan on the story:

It is set in the modern day — I don't want people to think it's Jonah Hex or Lawless. I was a big fan of Westerns as a kid, and I actually still am — not to the extent that I've gone to see The Lone Ranger as yet but a general thing. I like the aesthetic and I spent some time in West Texas just getting to experience the actual desert and areas that are actually kinda desolate still. You can go miles and miles and miles without seeing a building, and the harshness of the terrain has a lot to do with the tone and feel of the book for me. I wanted to do a Western-type thing set in a modern setting so it's got a real desert-dry feel to it. And like I said, I like crime and thrillers, so I wanted to see if I could cross some of that with the noir sensibilities and see what we've got.