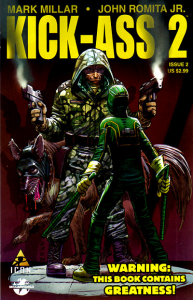 In a new interview with Digital Spy, comics and film entrepreneur Mark Millar gave away a number of fairly major plot points for the upcoming Kick-Ass 2 film adaptation. After nixing rumors that the film will include an animated sequence ("There's not one, but if there is one, John [Romita Jr.] is the one that will do it. Maybe they'll put one in, but in the script at the moment there isn't one."), he went on to tell the site that "every horrible scene" from the controversial Kick-Ass 2 comic book will be in the film. The biggest giveaway, though, came in the form of an answer about the Hit-Girl spinoff comic, which Millar says will be included in the Kick-Ass 2 film as an opening sequence. "Hit-Girl will be the first 30 minutes of the movie and then the next 70 minutes is Kick-Ass 2," Millar said. "So Hit-Girl is structured as the first act." Millar also said that Kick-Ass 3 will be the final installment of the comic book franchise, telling the reporter that while it's the most successful comic of his career, he's always known that the concept had a finite shelf life. Both the second movie and the third comic book series will be completed in 2013.

"People who've read the comic will know that the second one ends on a cliffhanger," Millar said. "Hit-Girl's been arrested and she's in prison, Dave has lost his dad and he's kind of destitute. The third one will be set two years later, and it's about where their lives are now, picking it up from there." He went on to describe the plot: "Hit-Girl has killed 80-something people by this point, so they're never going to let her out. She's like a tiny Myra Hindley. "It's basically illegal to wear a costume at this point, so that's quite interesting. I used to love Marvel Comics where the cops were chasing superheroes, seeing them as menaces because they're not licensed in any way. So I kind of like the idea of bringing that back, because in reality there's no way a cop or a fireman is going to let a guy in a suit run into a building. "I like the idea that after they have stopped a mugging they have to run away for the police. That old-fashioned superhero thing."