The premise of Michael May and Jason Copland's Kill All Monsters! is simple and awesome: In a world brought to heel by an attack of enormous monsters, there's only one hope for humanity: an elite group of soldiers piloting a small number of giant robots to fight them. They Kickstarted the first print volume of the popular webcomic, set to hit comic shops in July via Alterna, and made their goal back in the first day, even though most of the higher-end rewards haven't yet been touched. Copland joined us to talk about the comic, the decision to go to print and the Kickstarter campaign. ComicBook.com: Alright--so the first thing I want to ask is how does one go about doing a webcomic that's critically-acclaimed and fiscally successful? There are so many that most of them seem like white noise to me and it's only after I hear a name like Kill All Monsters thirty or forty times from people I respect that I finally pay attention. Jason Copland: I think a lot of our success has come from the fact that Michael and I REALLY enjoy working on Kill All Monsters (KAM). I think the love comes through on the page. Posting the comic weekly also helped get us a decent following. Having an amazing group of peers that are extremely supportive of the book is another bonus. 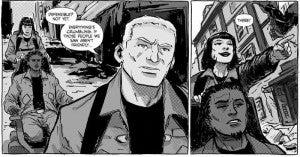 ComicBook.com: The comic has been around for a while - why now for a print edition? Copland: Michael and I have always had our eye on KAM being available in print form. We are both print lovers and feel a print version was just something that needed to happen. ComicBook.com: Are you guys prepared for the inevitable onslaught of semi-literate simians coming to your site to accuse you of ripping off Pacific Rim? Copland: We talked about the possible Pacific Rim comparisons that would happen but deep down we knew that KAM is its own thing and any comparisons between the two works wouldn't hold much water. ComicBook.com: What will be your approach with a movie that seems to so closely mirror your premise (though obviously not the execution)? Will you see it, or avoid it like Kirkman says he does with zombie movies? Copland: I'll probably see it… but I don't get out much, so it may have to wait until it's out on DVD. ComicBook.com: It's interesting--I think when I first heard of the series, my thought was that it would be gruesome. But May writes Good Comics For Kids and you've worked on America's finest comics magazine, The Perhapanauts. How do YOU describe the series to newcomers? 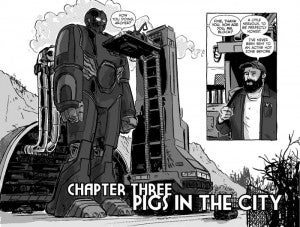 Copland: It does sound a little gruesome, doesn't it? The pitch I usually give is that KAM is a giant robots vs giant monsters book set in an alternative post-apocalyptic present world where giant monsters have pushed human civilization into hiding. One small group of resistance fighters have created crude mechs as a means to take the Earth back from the monsters. ComicBook.com: And what would you say are your strongest influences in the art? I think I can see at least four different schools and three specific artists reflected and refracted in different ways. Copland: After years of drawing, I think I've internalized most of my influences to the point of not really knowing who I draw like, anymore. Artists like Frank Miller, Walt Simonson, Alex Toth, John Byrne, Jorge Zaffino and Bill Sienkiewicz were huge influences on me at an early artistic age. I also love tons of new artists. Guys like Ashley Wood, Guy Davis, Chris Samnee, Nathan Fox, Becky Cloonan, Paul Pope and James Harren. I could go on and on, though. ComicBook.com: Now that you guys have blown through your goal and are cruising for stretch goals, is it tempting to take things like that "I'll draw you a short story" off the table? I mean, if it hasn't sold yet and the book is printed... Copland: Yeah. We are thinking of taking that level off the table, or reducing it. I will probably just reduce it so that there is only one "I'll draw your short story" reward at that level exists. ComicBook.com: On that note, I know it's always a thing some people have a problem wrapping their head around: What does the extra revenue get you guys, since your printing costs are ostensibly already covered by the initial goal? Copland: Well, in truth, the goal we set was much lower than the actual costs for printing and distributing the KAM trade. Once you take off Kickstarter fees, taxes, Amazon payment fees, the costs of making the t-shirts/prints, shipping and packaging costs, the actual amount of money left over is far less than one would expect. So, while we are certainly kicking ass with the campaign, we are still not talking about extra revenue, yet. But, BUT, if there is money left over after paying all the things we need to pay for, it will go to all the creators of KAM. Ed Brisson (letterer) and James Powell (editor) are part of this KAM machine and will share in whatever money is left. ComicBook.com: So here's a thing: With Greg Pak and Jonathan Coulton following in your footsteps and getting their Kickstarter wrapped in a day, it seems to me that acceptance for the Kickstarter format has become so widespread that certain "sure-thing" campaigns are, almost as a standard, getting done in no time flat? Copland: The time has come where fans are very willing to open their wallets and show their support for indie things they want to see happen. If the creators/book/property have a large enough following, it is pretty much assured that a modest campaign will be successful. It's a wonderful thing to see and be a part of.

Kill All Monsters In Your Comic Shop! Jason Copland Talks the Print Webcomic