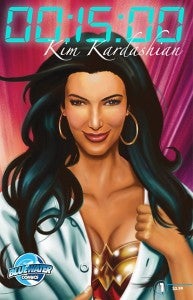 Bluewater Productions is famous for doing biography comics on politicians and celebrities, but the new comic book they announced today might be a first. Kim Kardashian’s love life is getting its own bio comic book.

“It’s safe for me to say that over-all, I’m quite happy with the end result of this project,” said artist Hernawan. “I’m very grateful to be given this opportunity, and I hope the reader will enjoy the book as much as we enjoyed making it. Hopefully Kim will too!”

15 Minutes: Kim Kardashian is just the first in what looks to be a brand new series for Bluewater Productions. The 15 Minutes series will focus on reality stars. Bluewater Productions teases that cast members from The Real Housewives of Beverly Hills and Jersey Shore could be next to get their own bio comics.

Kim Kardashian’s Love Life Gets Its Own Bio Comic Book