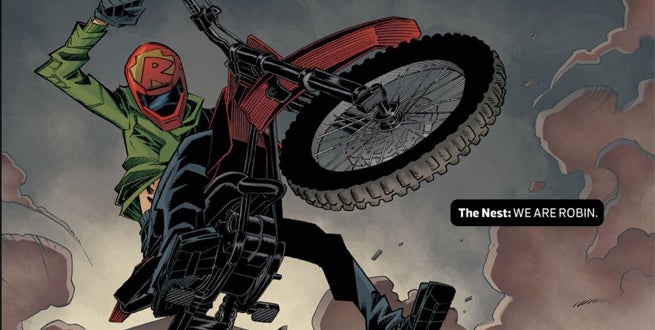 When Batman needs a hand, more often than not he turns to his protégé, usually a young child going by the name “Robin.”

But in a Gotham City where Batman has died and been replaced by a new police-run Bat, what the city needs is not just one Robin, but an entire movement. That’s what We Are Robin, one of DC Comics’ new titles in the post-Convergence DCU is offering. Written by Lee Bermejo and drawn by Khary Randolph, Rob Haynes, and other artists, the series aims to show what kids in a modern-day Gotham City could get done if they decided to take their city back from the dregs of society.

We talked with Bermejo about the new series and his plans for the vigilante gang, as well as his written and drawn series at Vertigo, Suiciders. Scroll down to read the entire We Are Robin Sneak Peek for free!

Lee, putting on solely the writer hat for We Are Robin; what’s the initial appeal about that to you as a creator?

Lee Bermejo: It all comes down to the story, you know? That’s the thing – that’s what the medium’s about, really. So the important thing to me is being able to tell the stories I want to tell, however I can tell it. Some of it is limited, in terms of what I can draw and write at the same time, just because I’m so, so slow! Art comes together really slowly for me.

So I thought it would be amazing to also work with someone else, just to tell more stories. That really is what it comes down to for me. So far, I have to say, this book being my first experience with that, it’s been lovely. It has been a pretty incredible experience, to work with the guys I’m working with, and I can’t wait for people to see what this book is all about. Once people start getting their hands on what all of us are doing, I’m hoping they’ll be as excited about it as I am.

It kind of looked like we may have seen a little preview of this book… We saw a bunch of kids coordinate themselves and take matters into their own hands in the Detective Comics: Endgame tie-in. Will any of those kids, Dre, Riko, Lonnie, and Dax be included in this story?

LB: Exactly, yes. Yeah, absolutely. You’ll see quite a few characters in this book. Those, Riko, Dre, Dax, those characters and a few others will be central to this book. By now, people also know that Duke Thomas is in the book, and he’s the eyes for the reader. He’s who introduces us to this world.

Duke Thomas is interesting, because we’ve seen his past: watched him step up since he was literally a child, and we’ve seen his future: standing tall and proud as Robin next to Batman – What does the Duke Thomas of the present see as his mission?

LB: The Duke Thomas of present wants to find his parents. That’s central to who he is when we see him in We Are Robin. He doesn’t really care about much else. Him getting involved, without giving away too much, but him getting involved with the Robin movement is very much – not necessarily the choice he would’ve made had circumstances been different. And that to me is interesting. It’s an interesting way in to this concept in general of this movement.

That is interesting – so he emerges as a leader but he doesn’t necessarily see himself as altruistic here?

LB: I think he definitely sees himself as… well, that’s a good question! I honestly have been writing him for a few issues now, and it’s been interesting to me to play with what Scott Snyder and Greg Capulo have done with the character, but at the same time we’re finding him at a very different point in his life. What I think is interesting about Duke as a character – there’s a great scene where he’s solving the puzzle, because he wants to stop the Riddler – that scene in Batman was so telling of who he is as a character. He wants to solve that puzzle. I think that’s very much who Duke is. When we’re introduced to him here, he’s got tunnel vision. He can’t see a forest through the trees. Part of the fun of this book in general is seeing not just him but these other characters, see how all their lives come into both conflict and harmony with this “We Are Robin” movement.

I’m very interested in this movement being centered on Robin. We have obviously seen gangs of a sort rally around Batman before (the big one: The Dark Knight Returns); why are these kids embracing the Robin identity for their movement rather than Batman himself?

LB: Well I think because they’re teenagers! This idea, the concept of legacy in the Batman Universe is huge, right? We’ve seen several of these Robins already. I think Batman has some big shoes to fill for kids. Also, there’s an element of Batman that in my mind may not be as immediately visual for kids, you can’t see yourself in him in the same way that you can with Robin. The other element of Robin that I think is really important is that he’s this colorful character in this city that’s dark and grey and grimy. He’s the ray of light. I think that’s an important element of who that character is; a dark and gritty Robin doesn’t necessarily go hand-in-hand. You can tell those kinds of stories with that character, that’s one thing, but the character itself is about finding that light, finding that more bright center.

So these hundreds of kids in the Robin movement have that general outlook to them, where they’re genuinely trying to do some good and not just joining to join?

LB: Absolutely, absolutely. That’s the point of it! I think I’ve said this before, that the central idea of the book is: there’s one thing to want to be part of a movement; you see it on facebook and twitter all the time. “Right, rock on. #WeAreRobin.” It’s one thing to do that and feel part of something, but it’s another to actually step up and do it, to go out and help people, and to make your city a better place.

And not every one of these characters is going to have that in him or her. There’s a very interesting to me possibility, to talk about what are heroics in general. Is that just putting on a domino mask and beating up bad guys? No, it’s a broader concept than that. I think that plays well into a book with lots of different kids from lots of different backgrounds and interests and skill sets and fears. From that point of view, it’s going to run the gamut a bit broader of what the concept of a hero in Gotham City is.

Of course, Gotham City post-“Endgame” is a different place for vigilantes, with the GCPD running Batman… What do the powers-that-be think of these kids trying to help fill the vigilante void?

LB: Yeah, I can’t really talk about that, because that does come into play, and I don’t want to spoil anything. But you can rest assured, that yeah, this new Batman will definitely make an appearance, as will some other costumed heroes that people may be familiar with…

Who might have a “bat” or “robin” theme to them? (laughs)

LB: (laughs) Possibly? Yeah, you’re going to see how our characters play around in a world that is also populated by these other costumed vigilantes. And these kids are very JV, they’re not playing varsity. They’re not trained, they don’t all know what they’re doing. They’re not necessarily good at this thing that they want to do. They’re learning the ropes, and they’ll learn the hardway.

Yeah, I liked when Lonnie went down the rope in the “Endgame” tie-in and almost smacked into the wall…

LB: (laughs) Yeah! What happens when we have a character who doesn’t like heights? You can’t really jump around on rooftops when you’re scared to death of falling! There are human elements here that are pretty fun to play with and turn. Especially in Gotham where you have all these characters in capes jumping and swinging around… Our book is, compared to the other Bat books, slightly more realistic.

And just teasing, is the central antagonist more towards Duke, or someone that’s affecting the whole movement?

Of course, on Suiciders you’re pulling double duty, both writing and drawing. I love all the little clichés and catch phrases thrown into every day dialogue in there – is that a conscious decision? What makes people in New Angeles speak that way?

LB: They’re all playing parts, they’re all reading lines from a bad James Elroy book. That’s central to that world to me, this idea of playing the role. You have one character who is very literally playing the role, and this concept and theme of identity is very big in the book, and you’ll see more of that as the first arc comes to conclusion (the fourth issue is on shelves now) and there are things in that issue that really pushed the characters toward the finale.

But yeah, it’s definitely a conscious decision – I don’t know if the book comes off this way, but the book is pretty satirical to me. It’s like a Verhoeven movie, I’m trying to wear a lot of its genre tropes really on my sleeve. I want those things to fly that flag proud. If people pick up on it? Great! If they think I’m just writing bad dialogue, then maybe their minds will be either changed or confirmed with We Are Robin! (laughs) I don’t know! We’ll see. But yeah, the attempt is to do something very 80s sci-fi satire.

I like it, and that you’re exploring the theme of “empowerment” in two very different ways with these two books.

LB: Yeah, that’s cool. I’m trying to – I think in some ways, that’s the interesting thing with writing more, it’s really unconsciously, these themes that maybe you don’t set out to do two books with one idea. But it happens because you’re starting to learn what central themes interest you. I’m excited for people to see both!

Lee Bermejo Launches We Are Robin Movement in Gotham City