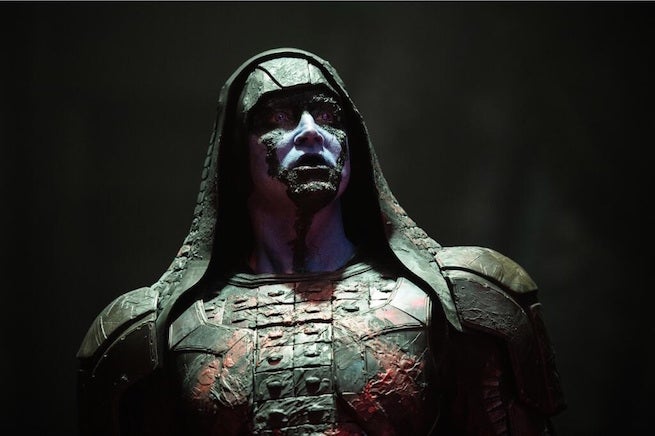 Although he met a dusty fate as the villainous Ronan the Accuser in last summer's Guardian of the Galaxy, Lee Pace says he would be more than game to return in a future installment.

"I love the character," Pace explained in an IGN interview. "I'd love to play him again! Who knows!?!"

He added, "I loved that film. I was so proud to be a part of that whole fun moment. I found the character very, very interesting, exceptionally, and in playing him -- this kind of charismatic space terrorist. The idea is fascinating. I had to kind of crack the way the character thought. For me, I think he's doing what's right for his people. He's going to right a wrong. He's annihilating the weak in favor of the strong. That's a different set of values, and he's fighting for them."

Pace stated that even if he couldn't return as Ronan, he would be more than happy to return to the comic book universe in some other capacity.

"The one thing about this year is I've gotten the opportunity to play some true characters," Pace said. "Very, very far from myself -- and I love it. I really enjoyed that. I found it creative and fun to put on a mask and transform and be big -- big characters. Thranduil was kind of a broad character. I really enjoyed that. I found it really fun. So within the Marvel Universe there's lots of characters. It's different than Joe MacMillan [AMC's Halt and Catch Fire]. The work is kind of reveal yourself. In those roles, the work is to put on a mask, have fun."

The actor says that the success of the Marvel film doesn't shock him.

"I knew I liked it," he said. "I knew when I was working on it and I was watching Chris Pratt and Dave [Bautista] and Zoe [Saldana} and James [Gunn] working together. I was like, 'I like it! I like it a lot.' I liked what Karen [Gillan, who played Nebula] and I were doing together in the Dark Aster. I enjoyed it, so I'm not surprised in any way that other people have."