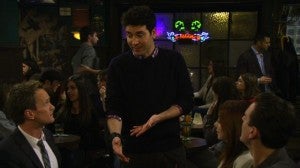 How I Met Your Mother

is a CBS sitcom that for years shared a night with The Big Bang Theory, so it's never much of a surprise when the occasional Star Wars reference or something like that sneaks in. Last night's episode, though, was something entirely else--not only did a timely assist from an R2-D2 ringtone play a key role in the episode's plot, but the show also carried a running Lord of the Rings gag throughout, with Robin's engagement ring making her "invisible" to men around her, utilizing the same insta-invisibility that was used in Lord of the Rings a number of times, and on one occasion the ring talking to Robin in a Gollum-like voice. Robin, of course, is played by Cobie Smulders, best known to readers of this site as S.H.I.E.L.D. Agent Maria Hill in Marvel's The Avengers. She'll next be seen in Captain America: The Winter Soldier. And leaving aside the fact that she derisively referred to Lord of the Rings fans as "nerds" and Harry Potter fans as virgins, all the genre references crammed into one episode carries a show that's pretty comfortable in that wheelhouse to a whole other level. How comfortable? Well, aside from Smulders, the cast features Buffy the Vampire Slayer standout Alyson Hannigan and Dr. Horrible's Sing-Along Blog star Neil Patrick Harris (who has a life-sized Storm Trooper mannequin in his apartment). Hannigan's husband, frequent Joss Whedon collaborator and Avengers villain Alexis Denisof (he played Thanos's #2 guy, the Chitauri leader) has made frequent guest appearances--and of course Marshall is played by Jason Segel, star of The Muppets and Freaks and Geeks, which is borderline but we'll allow it. Really the only actor on the show with no geek cred to speak of is Josh Radnor, who plays series lead Ted Mosby--but he's the guy who forced his ex-fiancee to watch Star Wars because if she didn't like it, he couldn't marry her...so he's probably covered. You can click here to watch "Ring Up," the most recent episode of the series and the one with the Lord of the Rings runner.

Lord of the Rings, Star Wars References Drive This Week's How I Met Your Mother

Marvel's Ant-Man and the Wasp: Quantumania Reveals New Looks at Kang and M.O.D.O.K.