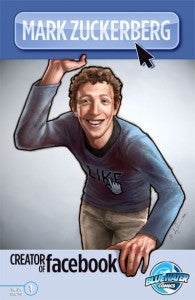 Facebook founder and CEO Mark Zuckerberg has really hit the big time. Not only are people making movies loosely based on his life, but now he is being immortalized in the pages of a comic book. A Mark Zuckerberg comic book by Bluewater Productions is scheduled to arrive in stores on Wednesday, February 23, 2011. Bluewater Productions is promising a more balanced portrayal of Zuckerberg, unlike the movie which Bluewater describes as portraying him as "a detached, cold and calculating internet visionary."

Mark Zuckerberg: Creator of Facebook is a 48-page giant-sized comic book, which is written by freelance journalist Jerome Maida and illustrated by Sal Field."This is a fascinating story," says Maida. "I enjoyed researching it because it's extremely compelling. Think about it. Mark Zuckerberg is the youngest billionaire on the planet and created something that has already had a profound impact on the world. Yet hardly anyone knows much about him. It's amazing." According to Maida, the script doesn't shy away from the harsh reputation Zuckerberg earned as a result of his business practices and aloof public persona, but tries to give context to a complex figure. "Rightly or wrongly, Mark dealt harshly with some people on his way to where he is today", says Maida. "As we see, he left many people feeling betrayed. I try my best to be fair here. No one is totally innocent in this story. I try to represent each of the major players' point of view."

Photo: CM Punk Spotted Publicly for the First Time Since AEW All Out, Injury Confirmed