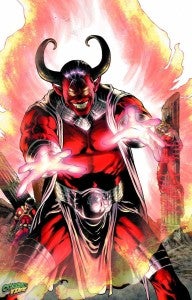 Marv Wolfman, the most influential writer in the history of DC's storied Teen Titans franchise, will return to the title for one of a pair of Villains Month one-shots, focusing on Trigon, a character he co-created with his longtime collaborator George Perez, ComicVine revealed today. Trigon's daughter, Raven, has been a key part of the Titans' ongoing story for a while now--and another villain (Deathstroke the Terminator) who played a major role in Wolfman and Perez's legendary run on the title will star in the other Villains Month issue for the title. Wolfman, who also works in TV and film, has never shied away from returning to the scene of his most famous successes, relaunching a Vigilante series a few years ago and releasing the Teen Titans: Games original graphic novel in 2011. He's even written stories set during or around Crisis on Infinite Earths, which he and Perez did together, once or twice. Here, Wolfman teams with CAFU for Teen Titans #23.1, a book that will feature a 3-D motion cover by Eddy Barrows, who will draw a similar cover for Teen Titans #23.2, focusing on Deathstroke and featuring a writing team of Corey Mays and Dooma Wendschuh with art by Robson Rocha.