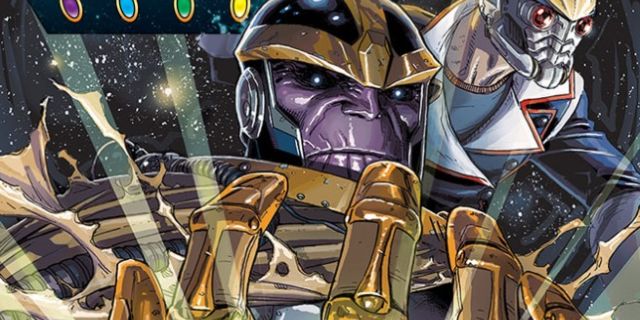 Marvel Comics has announced Infinity Gauntlet #1, the publisher's latest concept-revival to tie into their Secret Wars crossover event. Co-written by Gerry Duggan and Dustin Weaver, with art by Weaver, Infinity Gauntlet will reimagine the 1991 Marvel miniseries event where Thanos gains possession of all six Infinity Stones to become the omnipresent master of the universe.

In this retelling of the Jim Starlin and George Perez epic, Duggan and Weaver will introduce readers to a parallel universe that's gone apocalyptic. In this nightmare realm, where giant insects rule the land, a young woman named Anwen Bakian stumbles upon a mysterious, but powerful stone. With cosmic power suddenly in her grasp, Bakian has a chance to change her and her family's unfortunate circumstances.

But of course, this series wouldn't be called "Infinity Gauntlet" without a major presence from Marvel's mad titan, Thanos. As Weaver told Hero Complex, Thanos will carry a presence in the story, but he won't be the same despot that most readers know him as.

"This is a more grizzled version of the character; he caries the weight of his experiences. He's colder, more mysterious, and impenetrable," Weaver said. "But you can be certain, some things about Thanos will never change."

Duggan and Weaver were coy as to how closely this retelling would follow the original Infinity Gauntlet, what major Marvel characters might appear, or even how the series will tie into the greater Secret Wars event. For those not in the know, Secret Wars is Marvel's upcoming crossover, in which the entire multiverse collapses into one planet called Battleworld. On Battleworld, every Marvel timeline, universe, and dimension are crammed onto one planet. There,they must fight for survival.

However, Duggan was able to hint to Hero Complex that Infinity Gauntlet readers will "see some old ideas and characters in a new way, while being introduced to brand new concepts."

Check out the gallery below for Marvel's preliminary art on the project, which showcases a rugged Thanos and confirms the involvement of The Nova Corps.

Infinity Gauntlet #1 hits comic shops and digital devices in May.

New Marvel Multiplayer Game for PS5 Rumored to Be in Development

Halo Infinite Battle Royale Mode Would Be "Perfect" According to TimTheTatman