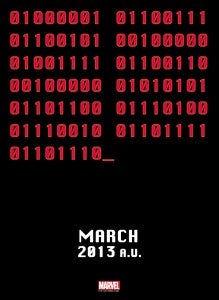 Coming in March, Marvel Comics will present the Age of Ultron, the publisher announced via binary text in a new teaser image that was distributed to the comics press ahead of a formal announcement coming on Monday. The story, by Brian Michael Bendis and Brian Hitch, was originally scheduled to be a 2012 event story coinciding with the end of Bendis's run on The Avengers, but had to be pushed to 2013 due to scheduling conflicts on the part of the creators. A Point One story tying into the series has already been released, and then re-released at Free Comic Book Day.