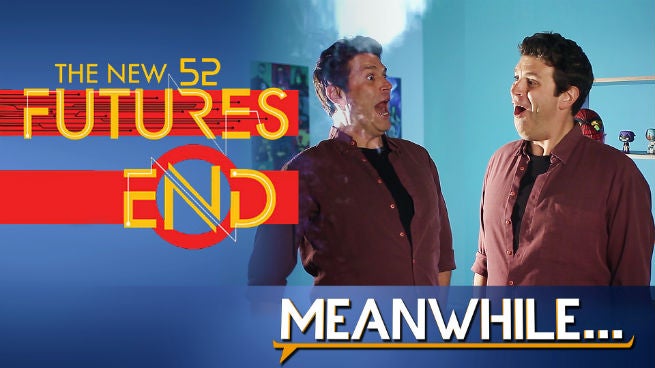 Meanwhile..., the webseries launched earlier this year to help fans get up to speed with comics (usually with a tie to the movies and TV series that make casual fans or non-readers curious), has teamed with ComicBook.com to produce an episode bringing you up to speed on DC's weekly mega-event The New 52: Futures End.

Okay, well, we didn't really team with them so much as do a teeny bit of copyediting for them while they did all the heavy lifting. But you get the idea.

Futures End is, of course, well into its twenties by now, but many fans have had a renewed interest in getting caught up on the series since the announcement that April and May will see the launch of Convergence, an event spinning out of the events of Futures End and featuring heroes from a number of fan-favorite alternate realities, including Gotham By Gaslight, Kingdom Come and the pre-Flashpoint DC Universe thought destroyed when the New 52 launched.

Obviously, this is only scratching the surface of what you need to know in a weekly as massive as Futures End, and we'll have a companion to catch you more fully up to speed coming next week, but it's a great primer, especially for anybody who never started the series and needs to know why the heck everything is so awful Five Years Later.

Check it out, and subscribe to Meanwhile..., because those guys do some awesome work.

Meanwhile... Webseries Catches Fans Up on The New 52: Futures End to Prep For Convergence