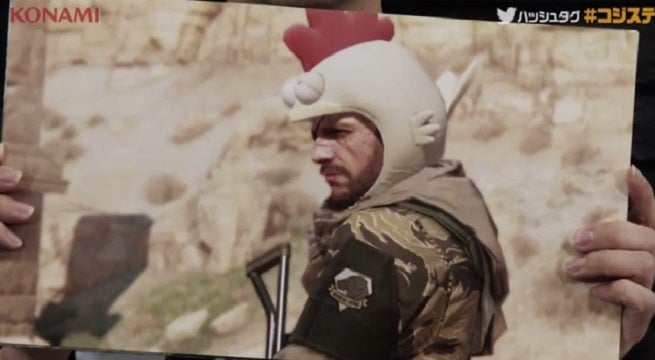 Metal Gear Solid fans watching a livestream yesterday were given a strange, useful and slightly silly new feature for Christmas...but few of them were particularly grateful for it.

That's because fans had tuned in to the stream hoping that game creator Hideo Kojima would give some concrete information about the upcoming Metal Gear Solid V -- in fact, if the comments thread is any indication, many hoped that he would drop the release date during the Christmas broadcast.

Instead, they got the chicken hat.

According to Kotaku, it's actually pretty useful: If you're playing poorly, the game will offer you the chicken hat. You can wear it, and while you're moving through the game, it will give you minor advantages like enemies who respond to you more slowly or glow-in-the-dark capabilities that enemies can't see.

It's meant to ease players into the game, helping them to get better, rather than frustrated, and Kotaku compares it to the Golden Tanooki suit in Mario games. Of course, it's not a release date, and that left plenty of fans feeling like they sat through a three-hour broadcast only to find out they had coal in their stocking.