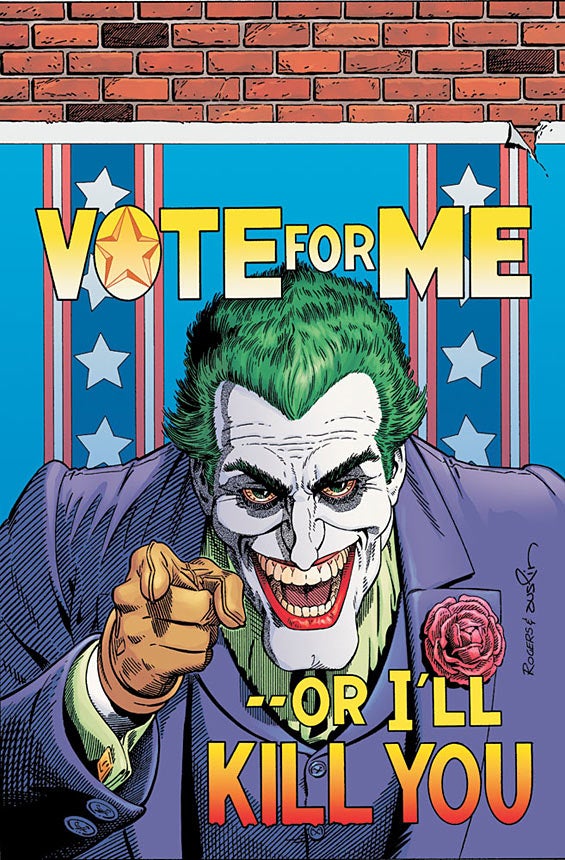 As today's midterm elections may remind some, comic books can get very political. You don't have to look past the cover of "Captain America #1" to prove that. Beyond reflecting the real world's political sentiments, comic book characters can also involve themselves in the process as politicians. Holding public office is a trope that many characters have cycled through, to varying degrees of success and actual political involvement. It made us wonder, if these super politicians were to run against each other for office, who would win on election day? This isn't a speculation on who would win in a fight, but who could better lead and carry the responsibilities of their elected position. Break out your campaign buttons and lawn signs, and see which comic book characters would survive in the political arena. 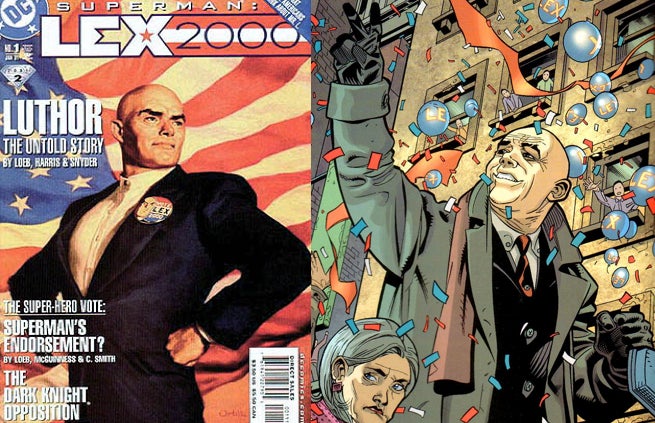 In the "Red Son" universe, Lex Luthor is America's golden child. In his term, he cured almost all forms of cancer, fixed sagging finances, and more or less ushered in a new utopia for The U.S. of A. The main (pre-Flashpoint) DC Universe's Luthor—became addicted to kryptonite-laced venom, threw on his power suit, and tried publicly killing Superman and Batman. It doesn't exactly earn you a monument in Washington DC, now does it? To be fair though, New Earth Lex is just as sharp of a businessman as his opponent, and could likely push America towards a financial stability not seen in years. Unfortunately, this is not enough to topple Red Son's true coupe de grace—having Lois Lane as the first lady. Sorry, New Earth Lex, but there's no shame in just being the president of LexCorp. 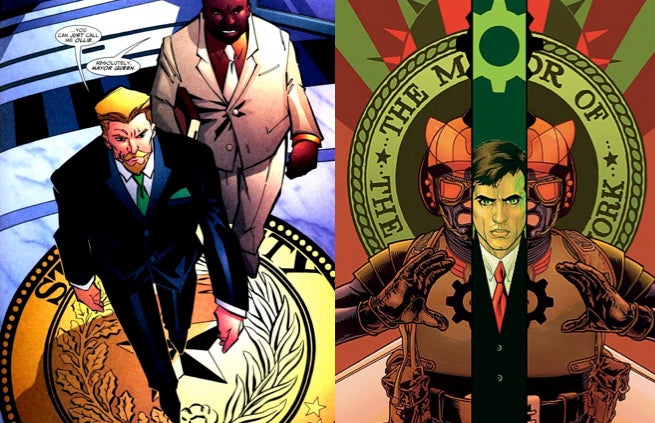 Both were passionate leaders in their own right, protecting rights civil liberties while pushing progressive policies that improved their constituents' lives. But "Ex Machina's" Mitchell Hundred can be cagey oftentimes, holding too many secrets close to his chest. Officials need to be transparent and honest with their voters. Not that Oliver Queen is model of honesty, mind you. Indeed, the citizens of Star City never knew Queen's secret identity as Green Arrow. In fact, it's that double-life that will cost Oliver Queen the election. Whereas Hundred was willing to hang up his Great Machine mask and give Gracie Mansion his undivided attention, Queen tried balancing his mayoral and superhero duties to horrific effect. A city needs its mayor to focus squarely on the issues that they can control, leaving the super heroes do what they do best. You can't eat your cake and have it, too. Hundred's tenure in office may have ended with some catastrophe, but he made it clear that the office was where his heart belonged. Oliver's, however, belongs to his quiver. 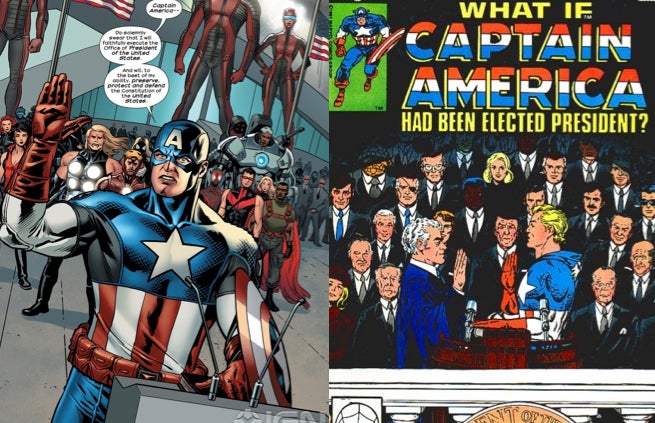 While 616 Captain America's bid for presidency during the John Byrne-era didn't take, Marvel did publish a "What If?" story where Steve Rogers did win the Oval Office. But the way things turned out for Cap after he took the sacred oath, he probably wished he had lost. President Cap starts his term off well enough, shifting America's entire power source to solar energy (if only it were that simple). But once Captain Americabecomes involved with foreign affairs, well, let's just say The Daily Show would have a lot to talk about for a while. After helping a group of South American rebels topple their oppressive government by supplying solar powered arms, Captain America learns that the rebel leader is none other than a disguised Red Skull. Using the solar technology that Cap unwittingly provided, the Red Skull fashions a cannon that topples American cities. So, yeah. America needs a president who does his homework before passing out munitions like Halloween candy. Compare this with Ultimate Cap: War hero. Dying to save his country, the Ultimate Universe's president remains a selfless leader in the mind's of Americans. So, should he ever come back to life (this is comics, after all), and reclaim his old seat, it wouldn't be a stretch to think that he could best an opponent who mistakenly aided the world's foremost terrorist and bigot. 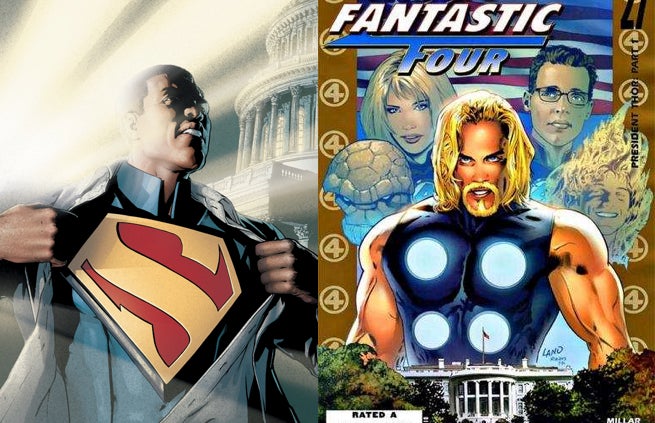 President Calvin Ellis, of Earth 23, wantsto make the world a better place. President Thor, from an alternate reality stemming off the Ultimate Universe, just wants to make everyone a superhero. While one could argue that President Thor's free handout of Skrull super-power pills makes him an advocate for universal healthcare, they would also have to argue that inadvertently killed the pill's users once the Skrulls invaded Earth. President Calvin, however, wisely balances his super powers with is executive ones. He once destroyed a country's dangerous nuclear facility as Superman, and then offered that country admittance into the international community as President. It's Calvin's forward-thinking that gives him a landslide victory over Thor. Plus, it would be way too difficult to understand any speeches in Thor-Speak. 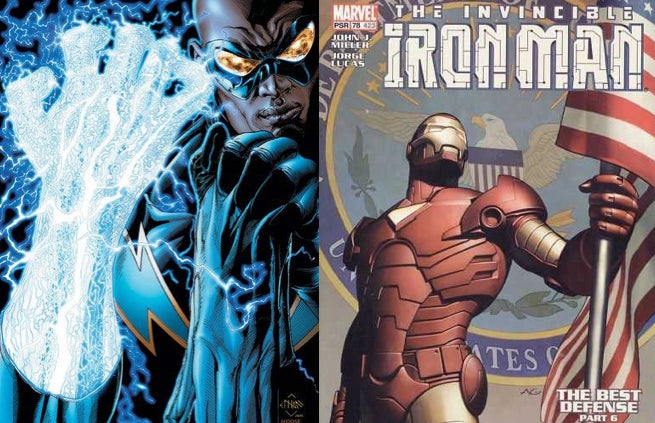 This isn't so much a race for one seat, as it is a question of who would make for a stronger cabinet member. While both contestants are selfless heroes, we have to call Black Lightning's political motivations into question. Serving as a Justice League spy under Lex Luthor's presidential administration, Jefferson Pierce was more concerned with digging dirt on Luthor than improving his country's educational system. Plus, his former credits include high school teacher and Olympic Decathlete. They're honorable titles, no doubt, but hardly the qualifiers to help shape the nation's future. Tony Stark, on the other hand, is one of the smartest guys in any universe. His history as a defense contractor gives him the technical knowledge needed for properly budgeting the armed forces, while his status as an Avenger awards him strategical prowess and leadership experience. There's just that whole public intoxication while at a United Nations conference blunder (even if it was an insane Scarlet Witch's fault). But hey, if Ted Kennedy could get drunk in public while remaining a beloved Senator, Tony should have no problem winning over concerned voters.