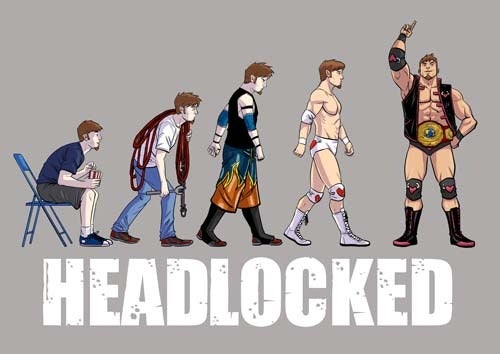 As a fan of both comics and pro-wrestling, I haven't really found much in terms of comics that represent the fine art of sports entertainment. Until I came across Michael Kingston's project, HEADLOCKED. The book does an excellent job showing the journey of an up and coming pro-wrestler on his way to the big time. I got a chance to chat with him about the second volume of HEADLOCKED, currently running a Kickstarter campaign.

HEADLOCKED: THE LAST TERRITORY is your second Kickstarter campaign. How would you describe the current environment in Kickstarter for this project compared to the first time?

Mike Kingston: It's been great. I think anytime you can raise over 40K to produce two independent OGN's, there's no room to complain. I think on one hand Kickstarter has become so much of a brand name that I think people are more open to use it, which is good. On the other hand, the media tends to focus on the negative stories or stories that make Kickstarter seem like a joke or a scam: potato salad, Sullivan's Sluggers, Pictures for Sad Children and that hurts. But there have been a ton of really awesome out-of-the-box comics that never would've seen the light of day if not for Kickstarter. I've pledged to over 40 projects and not only have I not had a bad experience...I've had  nothing but great experiences.

For a book like Headlocked, we would never have been able to generate the funding that we got through Kickstarter had we gone through the direct market without mainstream publisher or comic media support. And  thanks to that, we were able to produce a quality book that I would put up against any book on any shelf. 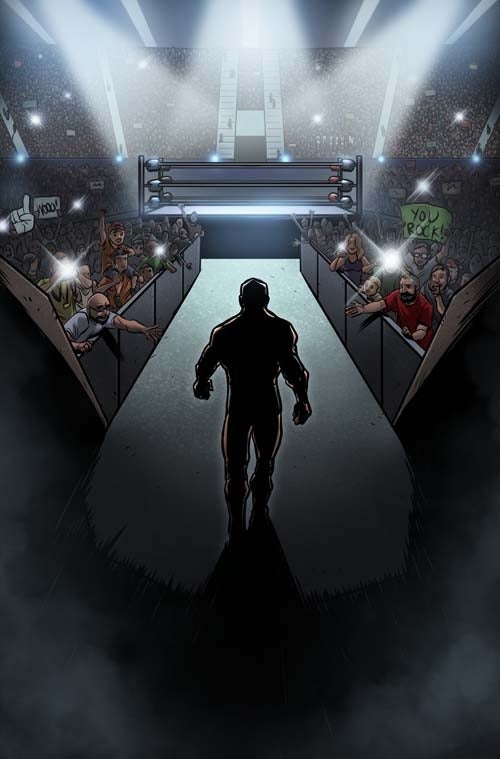 While comics and pro-wrestling share a nice cross section of fans,  there aren't that many comic books on pro-wrestling that can be  described as 'good.' How would you describe HEADLOCKED to potential  readers who think with that mindset?

Sadly, one of the biggest hurdles we've had to overcome is just  what the phrase "wrestling comic" has come to mean to people that are  fans of both. First and foremost, I think the main difference is that  our book is actually about wrestling. Most of those other books took  wrestlers and shoehorned them into different genres: superhero, horror, sci-fi etc. We're telling a character driven, coming-of-age story about a young kid's journey through the wrestling business. No  one is fighting demons or stripping Santa Claus naked.

And, of course, the most important thing that separates us from the  pack is that everyone involved in the book loves wrestling, comics,  and art. The wrestlers involved...Lawler, Hurricane, RVD, Booker T,  John Morrison, Chris Daniels, Frankie Kazarian... love comics and the  artists involved...Jill Thompson, Jamal Igle, Ramon Villalobos...love  wrestling. Heck, our interior artist, Michel Mulipola, is a wrestler  from New Zealand so more art is done by actual wrestlers than  traditional comic book artists. It's a giant love letter to the craft  of wrestling!

There are a lot of exceptionally talented pro-wrestlers, like Shane  Helms and Jerry Lawler, who are involved in your project. How did they get involved with the book?

When I started this project, it was just me in artist alley selling  my preview book. Shane Helms and Rob Van Dam actually bought copies of the book from me while they were walking around SDCC as fans. Later on, they both reached out to me to tell me they really liked it and  offered to help in whatever way they could.

After that, I reached out to Jerry, knowing he was an artist and how  much he loved comic books. And to my surprise, he was super eager to  contribute. As we put out a few more issues and did a few more shows,  I connected with guys like Ken Anderson, Christopher Daniels, Frankie  Kazarian, and Sinn Bodhi that essentially made the same offer.

Everyone was extremely supportive of what I was doing but all of them  understood the difficulties of getting a comic book that wasn't  supported by a major publisher or WWE out to the world. So they were all extremely generous in lending their names and creative talents to  the book in helps of raising our profile in the wrestling and comic  book communities.

This is totally going to sound like I'm blowing smoke but just how  nice everyone is. You grow up hearing how awful the wrestling business  is and how carny everyone is. But everyone that I've had the pleasure  of meeting have been so unbelievably supportive and generous with  their time and their talents. None of these guys ever had to do  anything for us but yet they have. We would never have been able to  get where we've gotten without their support. 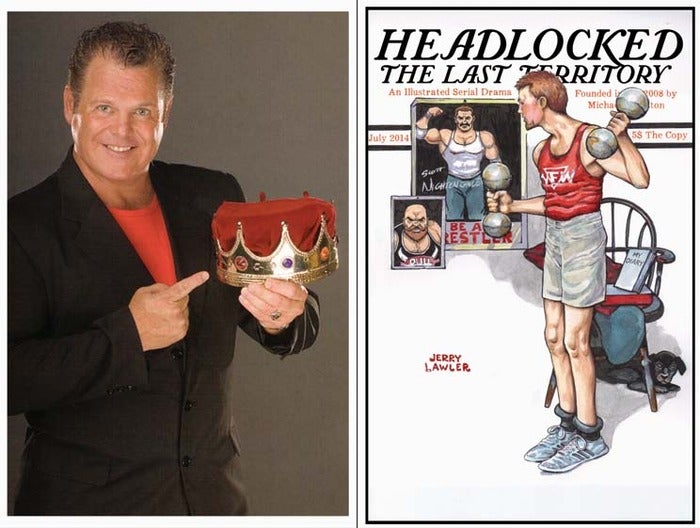 Aside from being able to receive a comic featuring the work of many  talented pro-wrestlers and a very captivating story, what can readers  who support HEADLOCKED: THE LAST TERRITORY expect from being a  supporter of your Kickstarter campaign?

Because Kickstarter is essentially the lifeblood to the project, we try to give our backers something special. Backers to our campaign  receive a special Kickstarter edition of the book that they can't get anywhere else. For our current campaign, that means a book with pinups  from Booker T, Tony Atlas, Caylen Croft, and stories by John Morrison,  Frankie Kazarian, and AJ Styles. We try to give people a reason to not  wait and buy it online or at a convention because the books literally  wouldn't exist without the funding to produce them.

And one of the other cool things is that we have numerous tiers where  folks can literally be drawn into the book. You can have a cameo  appearance, you can get a speaking role, or you can have your likeness turned into a wrestler.

Lastly, I want people to realize that if they are late to the  Headlocked party that we've made the Kickstarter accessible to  everyone. Even though this is for The Last Territory Vol 2, you can  still pledge for Vol. 1 either by itself or in addition to Vol. 2. We  recognize that as an independent, you might not have come across our  project and we still want to make it easy to jump on at a level that's  still affordable.

You can check out the Kickstarter campaign for HEADLOCKED here and there is just one day left! Also, catch Mike Kingston tonight on The World's Smartest Rasslin Talk Show, Straight Shoot, with Aubrey Sitterson tonight after WWE RAW.