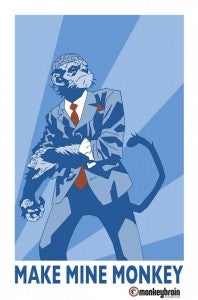 Monkeybrain Comics co-publisher Chris Roberson, co-creator of I Zombie and Edison Rex, among other things, released an open letter to the comics community this morning, expressing Monkeybrain's support for the Hero Initiative and encouraging others in the community to do the same. Roberson, whose name became associated with creators' rights earlier this year when he left DC Comics in a blaze of Twitter glory following the announcement of Before Watchmen, is putting Monkeybrain's money where his mouth is: The publisher will emulate the late, great Paul Newman in November and donate 100% of its profits to the Hero Initiative. According to the letter below, the publisher will still pay the creators their cut, but the percentage of the take they keep as profit will go directly to charity. The Hero Initiative is a nonprofit organization dedicated to giving Golden and Silver Age creators some kind of remuneration and benefits, given that most of them worked for very little money to create properties that have entertained readers for decades and turned out millions or billions in profits for the companies they worked for. You can read the letter in full below.

Over the decades, countless comic creators have given us excitement and inspiration, entertained and educated us. And we need to give back.

For most of the history of American comic books, the only income that creators received were the page rates for the work they did. Writers, artists, letterers, and colorists would be paid a flat rate for the pages they turned in, without any royalties for sales or equity for their creations. If a comic were to be reprinted, the creators would not receive any additional payment, nor would they be compensated if characters and concepts from their work were used elsewhere, whether in other comics, in other media, or in merchandising. And since the overwhelming majority of comic creators were freelance employees, there were no pensions or retirement funds for them to look forward to.

In more recent decades, comic book publishers have instituted new policies for comic creators. Some began to offer royalties and bonus incentives for creators, so that if their work sold well or was reprinted, they would participate in those profits. Some publishers instituted creator equity deals, so that if a creator's concepts and characters were to generate profits in other media, the creator would reap some of the benefit. But few if any of these policies have been made retroactive, and as much as later generations of creators have benefited from the improved financial arrangements, generations of creators who came before them have not. There are far too many stories of well-respected, talented writers and artists who created successful and beloved comics in previous decades, and who now are living in reduced means—unable to afford health care, unable to find paying work, some even homeless. At the same time, characters created and co-created by many of these same creators have gone on to appear in major motion pictures, on television, and in toy aisles. The American comic book industry was built on selling morality tales to young readers, stories of men and women who fought for justice and stood up for what was right. And the writers, artists, and others who created those stories deserve better than they have received. Thankfully, they have the Hero Initiative in their corner. For more than a decade, the Hero Initiative has provided a safety net for comic book veterans who need assistance, whether in the form of financial support, emergency medical aid, or an avenue back to paying work. In that time, the Hero Initiative has granted more than $500,000 to over 50 comic book veterans. But as a not-for-profit corporation, the Hero Initiative relies on donations and contributions to continue its work. Throughout the month of November, Monkeybrain Comics will be donating all of its income to the Hero Initiative. Our creators will still receive their cut of the profits, but the portion of each sale that we retain as publisher's profits will be donated in its entirety to the Hero Initiative. As we in the United States prepare to celebrate the American holiday of Thanksgiving, please consider giving thanks to the veteran creators who have given us so much over the years by donating to the Hero Initiative. And we encourage other publishers to join us in supporting the Hero Initiative through direct donations. Unless and until creator royalties and equity participation policies are made retroactive, charities like the Hero Initiative are the only support many veteran creators have available to them. Sincerely, Chris Roberson Monkeybrain Comics To offer your support directly to the Hero Initiative, or to find out more about their work, visit them at https://www.heroinitiative.org To find out more about Monkeybrain Comics, including previews, reviews, creator information, and links to purchase our titles, visit https://www.monkeybraincomics.com

Monkeybrain's Chris Roberson on Giving Back through the Hero Initiative