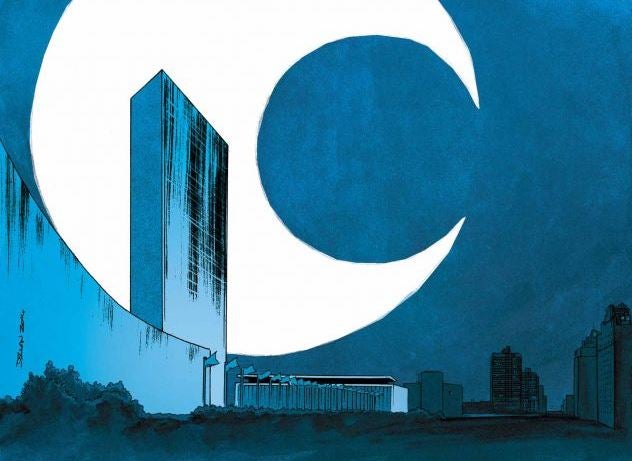 Moon Knight #10 continues the story begun by Brian Wood and Greg Smallwood when they took control of the title in Moon Knight #7. What began as a self-contained narrative in which Marc Spector protected the war criminal General Lor has grown considerably. Khonshu has abandoned Spector and chosen his therapist Dr. Elisa Warsame as a new avatar, allowing her to target Lor for his crimes.

All of that occurred at the end of the previous issue and Moon Knight #10 follows Elisa as the new Moon Knight; Spector's fate is left behind as a question mark. In addition to a shift in focus, this issue also opts to narrate the story from an outside perspective, in a similar manner to Moon Knight #6. It is about the character of Moon Knight, but is defined by a civilian whose life is affected by the bloodthirsty vigilante. This change helps to define Elisa as a unique incarnation of the Egyptian god of vengeance. Although her costume and goals may be very similar, her methods and role are entirely different. Spector made use of his background as a mercenary to become a violent vigilante using technology and weapons to achieve his goals. Elisa is a therapist and relies on her understanding of the human psyche and ability to manipulate it in order to achieve her purpose.

The use of psychology instead of violence to drive action seems less visually interesting, but Smallwood along with Giuseppe Camuncoli and Jordie Bellaire make it compelling and vital. When Warsame speaks, the backgrounds fade into a monochromatic scheme that depict the ideas and actions behind her words. It is a representation of the mind's eye reflecting not only individual concepts, like the faces of modern dictators from across the globe, but short visual stories as well. Smallwood depicts these stories, running both forward and backward in time, drawing out the subtext of the narrative in the foreground. 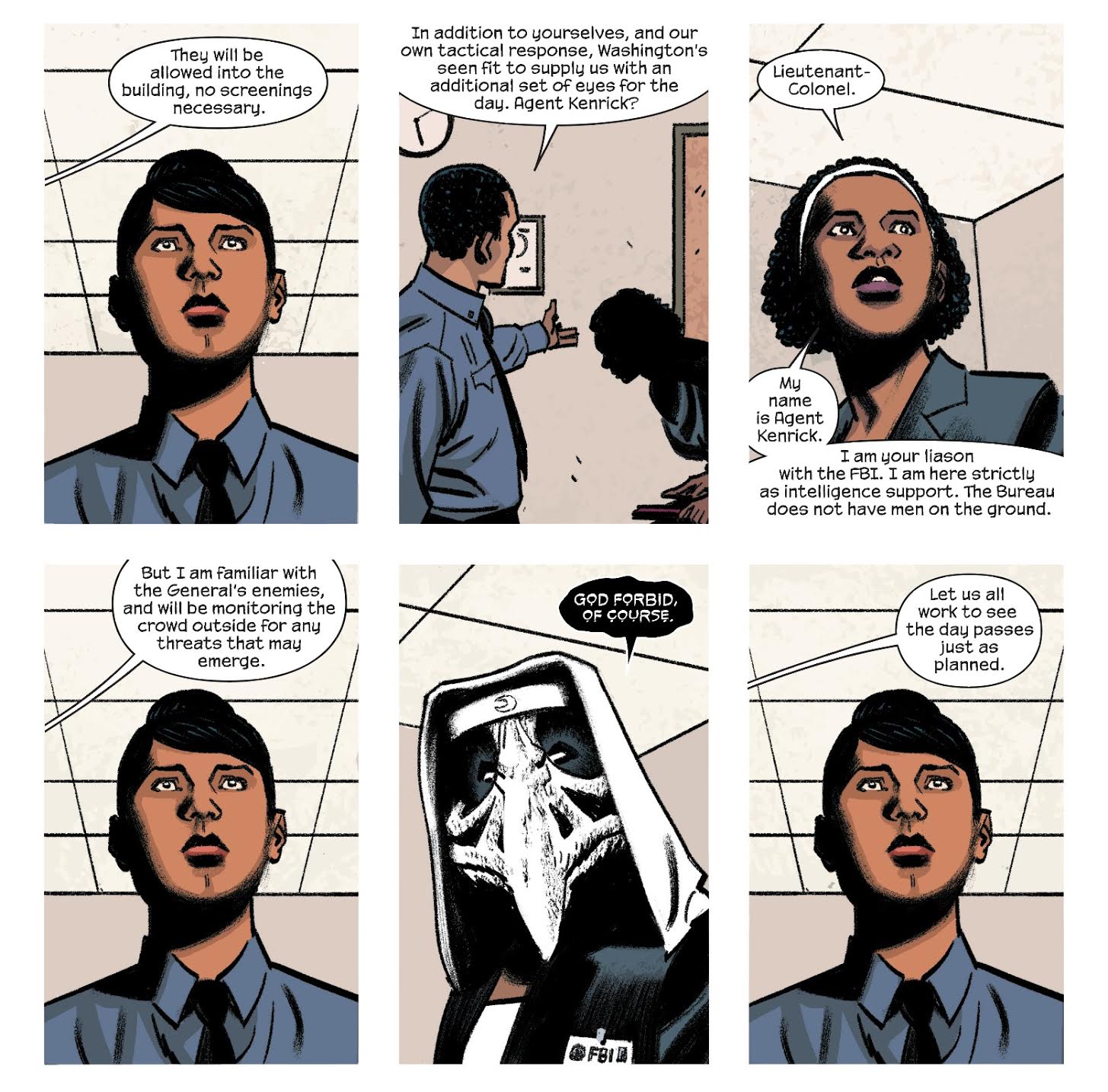 Smallwood continues to make use of a nine panel grid and negative space to form borders, providing each page of Moon Knight with a unique aesthetic. Panel compositions in this issue are some of the most clear and effective of his run on the title thus far. The only missteps in his work are really just missed opportunities. In a six panel sequence where a police officer interacts with Warsame, the two are shown in a series of shots and reverse shots. While the officer's face remains constant, Warsame moves from the shadows to the light and is finally seen as Moon Knight. The transformation of Warsame and the connection between the two women would form much more naturally if the panels alternated in an A-B-A-B-A-B pattern, rather than the uneven A-B-B-A-B-A. This is a minor item, but examples like this show how Moon Knight #10 could elevate itself from a good comic to a superb one.

The lack of clarity is much more noticeable in Wood's plotting. Over the course of Moon Knight #9 and #10 he has presented Warsame's case for executing General Lor, revealing Lor's significant role in a genocide and making a philosophical argument for his execution as well. It is a compelling narrative that, although I may disagree with the concept personally, is made to be the dominant morality within the comic. Yet the opposition to killing Lor is then shown to be a heroic ideal without Warsame's ideas ever being effectively challenged or refuted. The only reason a reader ought to side against Warsame in this contentious scenario (executing mass murderers is not an obviously abhorrent idea to many people) is if they would have done so regardless of the story. It is a confusing conflict that either does not understand its own morality or fails to present itself as being nuanced and without a clear solution.

The ongoing nature of this second arc in Moon Knight suggests that perhaps this confusion is part of a larger moral bluff, something that will pay off in the long term. Read as an individual issue though, it is perplexing. That does not detract from the beautiful presentation of the story, the excellent action (both psychological and physical), and twist on the Moon Knight persona, but it does prevent Moon Knight #10 from becoming something truly special.