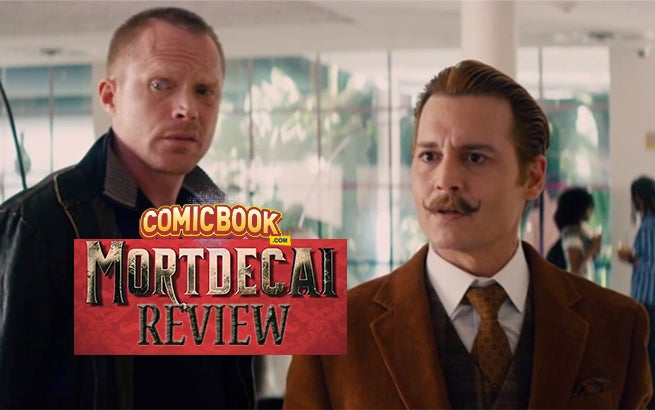 Johnny Depp can play eccentric, bubbly, over-the-top roles-- we know. And we keep letting it happen.

Charles Mortdecai (Johnny Depp) is an art connoisseur... of sorts. He is also a hustler, with an interesting, extravagant form of class, which tends to leave a bad taste in the mouths of those he crosses paths with. Yank Austin Powers out of one his films (better yet, let's just give him a fourth, please) and stick him into a couple years of stealing and selling pieces of art and other collectibles, combine that with Jack Sparrow tendencies from Pirates, and you have Charles Mortdecai.

Mortdecai, the intriguing, fun-to-watch, man with a mustache (which is a running joke throughout the film) finds himself in millions of dollars in back taxes debt, paired with debt to apparently dangerous Japanese gangsters (who collect art). Luckily for him (and for us), he has Jock (Paul Bettany, the voice of Jarvis, Tony Stark's assistant in Iron 1, 2, & 3 and Avengers).

While Johnny Depp's supreme delivery of even the silliest lines is, oh, so entertaining, Paul Bettany steals the screen every time he's on it as Mortdecai's man-servant and lady slayer. The comedy he provides to the film is a work of art in itself and really makes me look forward to his role as Vision in Avengers: Age of Ultron.

Anyway, Mortdecai's plan to settle his debt is to find a historic painting rumored to have a lead to hidden Nazi gold on it, steal it, and sell it. He's clever, but silly. This is where his gorgeous and fun wife, Johanna (Gwenyth Paltrow), who can't stand the mustache, comes in. She is the only character in the slap-stick film that has a brain both on the inside and out.

There is a line between movies for kids and movies for adults. This particular film is rated R. So, naturally, one would assume it's not for kids. Well, it isn't. It has plenty of inappropriate sexual innuendos and out-right genital jokes, but for some reason couples them with childish, silly humor at times. There's no doubt kids will love Mortdecai, if their parents allowed them to watch it.

Johnny Depp delivers a few lines with wit and precision that will make you laugh, but won't split your side, while Paul Bettany saves numerous scenes. It really makes me wish Johnny Depp would go back to something like Blow, where he can showcase his more down-to-Earth talents in a quality screenplay.

Bottom Line: Mortdecai is an okay film that will struggle to find a U.S. audience. A character is given a silly mustache to set the tone right away, and the tone in entirety is just that- silly. 6.3/10