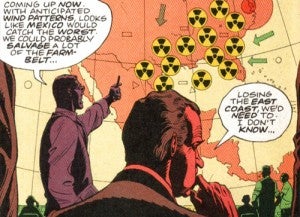 In case you haven't noticed, the race for the presidency of the United States is fully underway with the start of the Republican primaries and caucuses.  Some voters out there will be voting for President Obama no matter what, and others may be supporting one of the current Republican hopefuls, or even a noted third-party candidate, or are perhaps still waiting to see who supports their issues before deciding. However, we're going to take a look at some notable, and dare I say even infamous, comic book presidents and candidates.  These individuals represent a VERY wide range of domestic, foreign and in some cases alien polices!  Let's take a look back at the good, the bad and the downright scary, some even pulled from the real world!

President Richard Nixon in Watchmen  We'll start our list with a very infamously known American president given an even more nefarious turn in the critically acclaimed and still iconic comic book series Watchmen.  The events that actually happened in our world are given a very dark twist in this twelve-issue series, with Nixon still the president in the year 1985, following the repeal of the 22nd Amendment to the Constitution that happened years ago.  It becomes clear as the series continues that Nixon has used superheroes over the course of his presidency to not only win the Vietnam War, but to eliminate those who might question his government and the decisions made.  It's a chilling depiction, yet fascinating at the same time to consider what a president with superheroes at his disposal might due at a time of war and international tension. 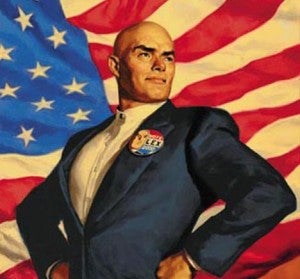 President Lex Luthor in Lex: 2000 and Superman/Batman In one of the more stunning examples of a fictional U.S. President in any medium of entertainment, Lex Luthor's ascendance to the title of President of the United States in Lex: 2000 is a prime example of how a charismatic figure and a wildly unpopular incumbent can form a perfect storm of unrest amongst voters.  Riding the promise of a technological boom for the country, along with the current administration's total abandonment of Gotham City in the wake of "No Man's Land", Luthor became President and wasted no time in trying to but his mark on the highest office in the land.  However, like most everything else that Lex plans and arranges for his own gain, it backfired on him, when an alien invasion destroyed part of Kansas and his foreknowledge of the event was exposed.  He quickly abandons the office in the pages of Superman/Batman, and one of the more memorable tenures of President came to an end. 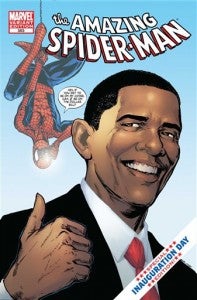 President Barack Obama in well...everything!  Was there a more omnipresent force in comics than current President Barack Obama over the course of 2008 and 2009?  For awhile he was appearing in as many books as ubiquitous Marvel characters such as Wolverine and Spider-Man!  An appearance in Savage Dragon was followed by a very famous, and hot selling, appearance in Amazing Spider-Man, a series that the President admits to being a fan of.  That's not all!  He also appeared in Devil's Due Publishing's Barack the Barbarian, a ripe piece of satire about the 2008 election.  He's made other appearances since then, and his form and partial face appear in various issues of Marvel titles, seen either talking to Steve Rogers or getting threatened by Norman Osborn.  If he wins re-election this year, perhaps an entire new wave of comic appearances will follow in the next four years!

Graydon Creed in X-Factor  Some candidates tap into a singular, hot button issue and ride that wave to office, no matter if it's a city councilman or, in the case of mutant-hating Graydon Creed, almost the presidency!  Creed had his first appearance in Uncanny X-Men in 1993, and it was soon revealed that he was the child of two very infamous mutants, villains and long time X-Men enemies Mystique and Sabretooth!  Being abandoned by his parents led to a lifetime of hatred towards mutants, culminating in his creation of the Friends of Humanity, an anti-mutant militant group. He even had brief membership in the mutant hunting group the Upstarts, who scored points for killing certain mutants.  After self-nominating for the presidency on a highly anti-mutant platform, Creed found himself the target of an assassination, by none other than Mystique herself!  That wasn't the end of the would-be politician, as he was resurrected in X-Force, only to be killed again in the pages of Second Coming storyline.

Gordon Wright in Captain America  Very few comic books in the past few years have had as much compelling and taught political intrigue and suspense as Captain America.  When Bucky Barnes took over the mantle of Cap in the wake of Steve Rogers displacement through time, he had to contend with the Red Skull's attempted manipulation of that year's presidential race.  Enter Gordon Wright, a popular third-party candidate who comes in financed and supported behind the scenes by the Red Skull, who will use the country's current economic plight, which he himself orchestrated, to lead a pawn into the White House.  The plan was headed for success, but the Red Skull's daughter, Sin, and other betrayals lead to a botched plan that brings all the Skull's plans, and Wright's candidacy and career as a Senator, to a quick and affirmative halt. 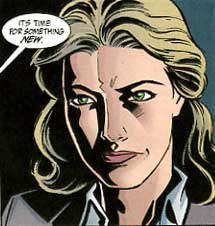 President Margaret Valentine in Y: The Last Man  It's interesting to see just how few women there are in comics who have high ranking leadership roles, especially where the presidency is concerned.  Enter Margaret Valentine, who becomes President after the plague that wipes out all men, except for one, occurs in the pages of the compelling Vertigo title Y: The Last Man.  She becomes president by the line of succession, as when the men on earth die suddenly, she is the highest ranking woman left as the Secretary of Agriculture.  The female Secretary of the Interior died in a plane crash, leaving Valentine to take the reigns in a time of great and crippling uncertainty.  She goes on to win re-election however, and in a case of life imitating art, when the comic was first written the actual Secretaries of Agriculture and the Interior were both women and were the highest ranking women in government.

Gary "The Smiler" Callahan in Transmetropolitan One of the quirkier names on this list, Callahan held a dark and disturbing place in the broader context of the Warren Ellis-penned series Transmetropolitan.  Elected strangely by a decent margin of victory, Callahan seeks the presidency for sheer power and the ability to harm others.  Not only is he sinister, he is also deranged, a fact that becomes readily clear to protagonist Spider Jerusalem.  Over the course of a large portion of the series' run, Spider dedicates himself to ending Callahan's tenure, which quickly takes on a very Big Brother like tone and reach of control.  Spider is eventually successful in ruining Callahan, but in the process many people die at the hands of Callahan and his ruthless, sadistic whims.

Savage Dragon in Savage Dragon  Last but certainly not least, how could I not include reluctant one-time presidential nominee Savage Dragon?  Creator Erik Larsen has never been afraid to mix real events into the world of his popular and long-running character for Image Comics.  For example, in 2004, Savage Dragon found himself an unlikely, and largely unwilling, candidate for President.  After amoral politician and just plan no good Ronald Winston Urass stages a campaign to get Savage Dragon to become a popular write-in candidate with himself as the running mate, his plan to gain more clout and control is exposed.  Urass reverts to further criminal behavior by taking up the mantle of Dread Knight, a title his former father wore, and he sets out to take Savage Dragon down.  Talk about politics making strange bedfellows!

WWE Hell In A Cell: Fans Flipping Out Over Brutal Sasha Banks vs Bayley Match

Boruto Impresses with Sarada and Sakura Fight in Newest Episode