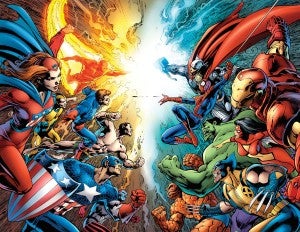 One of the things my late grandfather was always lamenting to me was his treatment of comic books when he was a youngster in the late 1930's and early 1940's. I started collecting comic books when I was in high school, the mid-1990's, and my grandfather was always quick to tell me about how they used to be a dime, how he couldn't believe he got rid of them, and of how they burned so many of them for warmth or used them for various bodily functions and household cleaning. I know for a fact, based on his observations, that several of those long-lost comics came from Marvel, then known as Timely Comics. The comic book collector/reader/writer I am today cringes when I think of all those lost gems and characters and my grandfather's memories of them, but I know, on this 70th birthday of Marvel's, that I will have plenty of my own memories for years to come.

I can remember pleading with my mom to rent videos for me of the Amazing Spider-Man and his adventures before I really read comics, spending hours watching the exploits of this fantastic character, and others such as Captain America, ready to reenact the scenes with my sister as a usually unwilling participant. The ill-fated Spider-Woman animated series was also a favorite, as I enjoyed seeing her often interesting villains taken down in a 30-minute feature. Plus it was just a cool character, as her recent resurgence has shown! 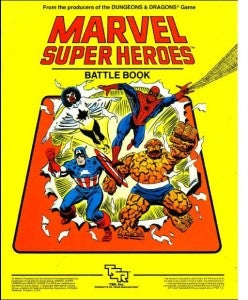 Watching The Incredible Hulk tv movies were a family event, as my dad and mom both enjoyed the BIll Bixby-led show. When he died in his final television film, it felt like a closing door on a part of my imagination. The Hulk was also a forbidden character in my family's infrequent games of the Marvel role-playing game series, as we deemed him too powerful to be a fairly used character. Obviously now I see they were humoring me by agreeing to play, but the game was a time for me to show that I knew more than my parents, at least where interactions between the Invisible Woman and Daredevil were concerned. And why did my sister always choose Meggan anyway? I can remember being at the local arcade with my sister, playing the Avengers multiplayer arcade game when my dad came to get us to take us home to tell us our grandfather had passed away. I had just gotten my driving permit and I would have given anything to have been able to get in a car and drive back to that arcade where life was simple, Hawkeye fighting the Living Laser, rather than be in that emotionally complicated afternoon of death where the second replays didn't exist.

One of the most ridiculous arguments I ever got into involved a friend in high school over which issue of the X-Men animated series was best and why. I thought that the first two episodes of the show were the best at that point. I don't remember which was his favorite, obviously because he was wrong! We would also go through similar debates when reading Wolverine and Cable, debating the badassery of those respective characters. Plus how many holographic covers could I buy and how much did you say that foil cover of X-Factor was again? Even though my interest and time for comics waned in college (I was an English major; when did I have time to read anything besides literary tomes) I still kept informed and aware of Marvel's major stories and characters. I can remember picking up a key issue here, a cool cover there, having an "oh wow, Doctor Doom's in this issue" moment during those years, rekindling my love for those characters and stories all over again. It's been a long time since college, but my love and appreciation for the memories I have of Marvel and its characters has not decreased. I've eagerly purchased movie tickets, bought t-shirts emblazoned with the Captain Americashield, and raced to the comic book store on Wednesdays to see what the New Warriors were up to, all because of what I think my grandfather was really missing from his lost books, besides monetary value; the feeling and the rush of escaping into a universe inhabited by people and stories that give us joy, make us think, and cause us to really pay attention to how a character, or a group of characters, can embody so much of our humanity in a few pages each month. Even though I read scores of comics each month from various publishers, it seemed appropriate on the day of celebration for Marvel's 70th birthday, to acknowledge those memories and that rush that I've had from reading Marvel Comics over the years. I'm hoping to see how much I'll have to say when they turn 100! Happy birthday, Marvel! You've earned it! I hope others have Marvel memories that are just as vivid as mine.

My Marvel Memories: A Personal Reflection on Marvel's 70th Birthday