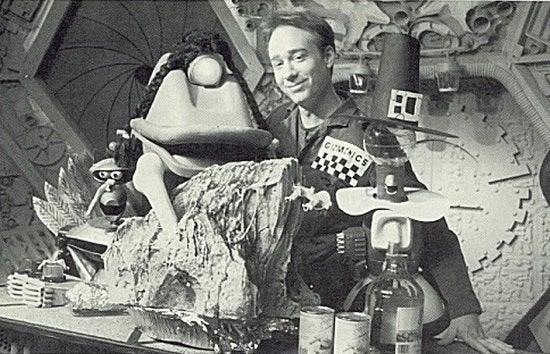 creator Joel Hodgson will return to the Satellite of Love to host Mystery Science Theater 3000's Turkey Day for the first time since 1997, reports Entertainment Weekly. Shout! Factory, who have been releasing the cult-favorite series on DVD, is celebrating the show's 25th anniversary with a Turkey Day Marathon, curated and hosted by Hodgson. Beginning at Noon EST on Thanksgiving, fans will be able to log on to MST3KTurkeyDay.com for six back-to-back episodes of Mystery Science Theater 3000. The six movies themselves aren't yet set, and Hodgson is taking fan suggestions via his Twitter account. "When I started doing Cinematic Titanic six years ago and we started doing live shows, that's when I really met these people who love Mystery Science Theater," Hodgson told EW. "I'd hear all these stories about Turkey Day. People would say, 'Yeah, we still watch Mystery Science Theater on Thanksgiving. It's a tradition, like the Lions playing.' I was kind of amazed that it was in people's lives like that." Just because it's Hodgson hosting, don't count out the Mike era as potential episodes to be aired during the special. "It's really been interesting, and I really loved getting to go back and look at these shows, especially the Mike/Kevin/Bill episodes, which I'm not as familiar with," Hodgson said. "They've been extra funny because I don't know any of the jokes. That's been a really cool thing."