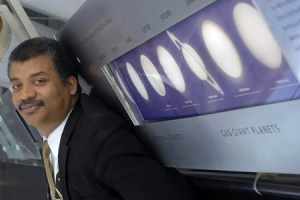 World-famous astrophysicist Neil deGrasse-Tyson has located Superman's homeworld of Krypton--both in the comics and in the real world. "As a native of Metropolis, I was delighted to help Superman, who has done so much for my city over all these years," said Tyson. "And it's clear that if he weren't a superhero he would have made quite an astrophysicist." Tying into "Star Light, Star Bright," a backup story in the upcoming Action Comics #14, Tyson (whose character is approached by Superman to help find Krypton in the comic book story) has located a system in our universe that shares a number of properties with Krypton. "This is a major milestone in the Superman mythos that gives our Super Hero a place in the universe," said DC Entertainment co-publisher, Dan DiDio. "Having Neil deGrasse Tyson in the book was one thing, but by applying real world science to this story he has forever changed Superman's place in history. Now fans will be able to look up at the night's sky and say – 'that's where Superman was born'." The red dwarf star designated for having the ability to support a Krypton-like planet is located in the constellation Corvus 27.1 light years from Earth. The star, designated LHS 2520, possesses a red, highly turbulent surface, somewhat cooler and smaller than the Sun. To find it in the night's sky, amateur astronomers and Superman fans can follow these coordinates:

For those DC Comics fans out there, you'll know that's in Sector 2813. Tyson's pop culture cred was already pretty well-established, having out-sticklered the notoriously detail-oriented James Cameron and convinced the director to change the night sky in Titanic's 3-D reissue to more accurately reflect how it would have looked on the night the luxury liner went down.