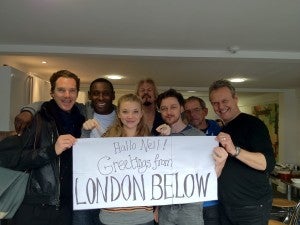 James McAvoy, Anthony Head, Benedict Cumberbatch, and Bernard Cribbins will star in a BBC Radio production of Neil Gaiman's Neverwhere, set to air in the first part of 2013.

There's a lot more details below, and lots to be excited about, including the fact that Gaiman is presently working on the American Gods pilot.

Neil Gaiman posted the photo at right to his Tumblr, along with the following message (excerpted from a longer, more general post):

Right now, also due to being in the wrong country -- like this minute -- I'm missing this, which arrived a few hours ago: [photo]

(It'll start on Radio 4 and then go over to Radio 4 extra.) The adaptation is by Dirk Maggs, who did the last three Hitchhiker's Guide Radio adaptations. He's co-directing it with producer Heather Larmour, who is the one who went off and made this happen after a small enthusiastic chat in a London coffee shop much earlier this year -- the kind of conversation that you have that normally just leaves you feeling happy, but doesn't actually turn into anything real. This time it did.

(Also, CHRISTOPHER LEE IS GOING TO BE SAYING LINES I WROTE. This makes me happier than I have any right to be.)

It will be broadcast somewhere in the first 4 months of 2013. And you will be able to listen to it wherever you are in the world, using the BBC's iPlayer.