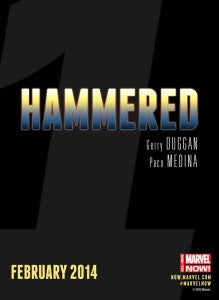 In the latest one-word teaser Marvel Comics have released for their All-New Marvel Now initiative, Gerry Duggan and Paco Medina are getting "hammered." Now, there's a big ol' #1 in the background of the image, but since we all know that Marvel is slapping a new #1 on all kinds of things that aren't really #1 but in fact the first installment of the new creative team, this begs the question: what will they be doing? With a Thor movie hitting theaters tomorrow, it seems like a good idea for the Thunder God to have more than one title--but by the time they launch anything new in January or February, things will already be gearing up for Captain America: The Winter Soldier. Since Thor and Loki both already have titles, there's basically two realistic things we can think of for this teaser: Thor: God of Thunder gets handed off to this team, leaving Jason Aaron to do other things, perhaps including something dealing with Winter Solder; or a new series--maybe centering around Thunderstrike, Beta Ray Bill, Valkyrie or other Asgardian characters who aren't getting the love at the moment. What do you think? Sound off in the comments.

New Thor Series Coming From Duggan and Medina? Seems Like It