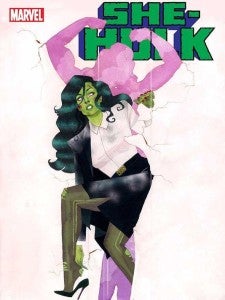 Today at the Amazing X-Men and the Marvel Universe panel at New York Comic Con, a number of Marvel talent were on hand to formally announce some of their new projects, including a couple that we knew about and a few that we didn't. The first announcement--such as it is--was Charles Soule's previously-announced She-Hulk series. "It's a thrill to be writing She-Hulk," Soule told the audience. "I've been an attorney for a really long time and I still practice law, so the idea of writing an attorney character was really appealing to me. I run my own practice, so I want to take experiences in that and apply them to She-Hulk's life." He added that "She's put in a position where she really decides she has something to prove to herself and the world around her. The premise we've come up with allows her to interact with all different corners -- secret corners and the highest levels of the Marvel Universe. The idea that she could meet anybody in the Marvel Universe is really great." Next came the formal announcement that Ghost Rider is set to join the Thunderbolts. "The main reason Ghost Rider is joining Thunderbolts is because I like dudes with flaming skulls," said Soule. "The other reason is that he fits the tone. While Johnny Blaze is a good guy at heart, he's the spirit of vengeance and terrible things happen around him. Putting him on the team is a natural fit. The reason he's on the team is because the team has a huge problem they thing Johnny can solve. The title of the arc is 'No Mercy.' If you've been reading 'Thunderbolts,' there's a character named Mercy. [That title] might have more than one meaning." 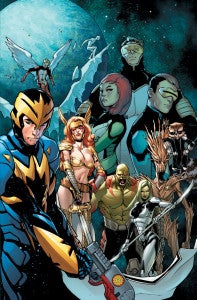 Heading back to the one-word teaser posters released by Marvel in the recent past, X-Men group editor Nick Lowe revealed "The Trial of Jean Grey," a crossover between the Brian Michael Bendis-writen All-New X-Men and Guardians of the Galaxy. Art will be by Stuart Immonen and Sara Pichelli. SPOILER ALERT: Lowe confirmed the "First Class" X-Men will still be around following the big Battle of the Atom story that involves X-Men from the future coming to force them to return to the past. [END SPOILERS] The six-part series will feature three chapters in each series. "In [Avengers vs. X-Men], the Phoenix was a big part of it," Lowe said. "When the universe learns there's a Jean Grey, they come to Earth, they take Jean Grey by force back to Shandalar and she goes on trial. The Guardians of the Galaxy doesn't like people getting too close to Earth. They take it upon themselves to [team-up] with the All-New X-Men to get Jean Grey." Other, as-yet-unannounced Marvel characters are going to appear in the story since "the All-New X-Men have connections in space," he said. ComicBook.com says the smart money is on Cyclops's family connections coming into play. Another title everyone kind of knew was coming was next: Peter David's All-New X-Factor. "First off, I want to say thank you all for coming," said David. "My work tends to be rooted in the real world, except for occasional battles about hell. I was looking at the real world and corporate present is just omnipresent." He added, because the series will use Marvel's fictional search engine provider Serval, "I was also fascinated by Google. Google came out of nowhere and not only invented a brand new word, but is into so many other things -- they're looking at space travel, they're looking at curing cancer. I thought about it and I said, 'Why wouldn't a corporation get into superheroes?' That hasn't really happened where a corporation says, 'Superheroing is something we want to embark on.' I wound up creating Serval Incorporated." 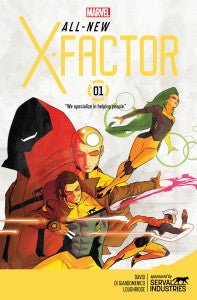 So far it's just Quicksilver, Gambit and Polaris who are officially announced, although more characters--and likely some of David's favorites--will be announced soon. "Quicksilver's interesting because Gambit doesn't trust him any further than he can throw him," said David. "And he has reason to. … A lot of what I'm focusing on is his relationship with Polaris. She's his half-sister. I thought it would be interesting to play with that, while at the same time Gambit says, 'You can't trust him.'" Earlier in the panel, they also announced that there will be a new book called Longshot Saves the Marvel Universe, from Doctor McNinja creator Christopher Hastings. To the despair of all in attendance, Marvel editor Jordan White told the panel that there would be no mullet on Longshot for the story.

Dexter's Podcast Is Also Getting a Revival

My Hero Academia Shares Izuku and Ochaco's Cutest Moment Yet