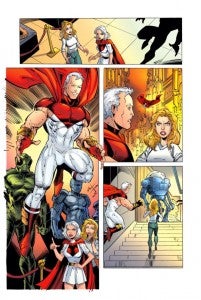 Our regular monhly conversation with Savage Dragon creator Erik Larsen takes a few strange turns this month. Not only did the issue ship late due to a production error, resulting in he comic arriving in comic book stores polybagged and stickered, but Erik himself had something of a major announcement his weekend at the New York Comic Con. With the relaunch of Rob Liefeld's Extreme imprint at Image, many canceled series will not only be getting a new lease on life, but actually picking up their numbering right where they left off a decade or so ago. One of those titles is Supreme, a title that Alan Moore made far and away the most popular of the Extreme titles. There is, in fact, a final, unused Supreme story written by Alan Moore that Larsen is pencilling, followed by taking over the reins of the book as writer/penciller starting immediately after. Dragon expert Gavin Higginbotham picks up my slack in analyzing this month's issue, while in the video attached, you'll see a lot of Supreme talk, segueing a bit into what we can expect in Savage Dragon's immediate future. Speaking of he future? Savage Dragon #175 is right around the corner, and Gavin and I have both seen it with our own eyes. Be excited. 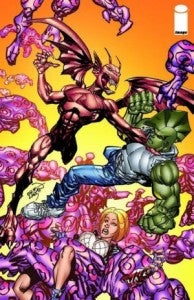 Gavin Higginbotham: This issue finally resolves the sub-plot regarding Rex's mutation. Is it something of a relief to tie up a dangling plot thread like that? Erik Larsen: Yeah--it's been a long haul. I really didn't think it was going to take this long to get it all wrapped up. GH: You must have a lot of patience to stretch plots out this long.... Or us it a case of finding the time to get it all done? EL: Sure--for any number of reasons. If it's resolved too early it seems too abrupt--if it's stretched out too long readers can forget about--or not be aware of--the set up. This seemed about right to me. GH: Robot Rex seems to have finally redeemed himself after acting as Kurr's stooge. Was his sacrifice just to emphasise this change of direction or did you just not want to have a duplicated visual between the two Rex's? EL: A little of both. Having him introduced was something of a red herring so that readers might think I'd just swap Rex Dexter back into his old body and leave Robot Rex as Battle Tank. I did grow to like Robot Rex but he was visually redundant and giving him a hero's death seemed like a good way to end his story. GH: With Malcolm destroying the Dimension-X portal, will Rex be in a hurry to rebuild it again considering what his family have gone through? Or are we done with that realm for now? EL: We'll see. Certainly in the short term--I'll steer clear of it. Dimension-X has been a recurring location for quite a few years now and I think it's time to give it a rest for a while. The dangling subplot being Mr. Glum and his sweetheart, of course. GH: Zeek makes his return to the pages of the main book for the first time since SD 100. He was a fairly regular fixture a hundred or so issues ago but has barely featured since. I imagine Malcolm and Angel could use his help defending Chicago? EL: Yeah, but at the same time it is their book and Zeek isn't the most reliable guy when it comes to helping. He's something of a lummox and is easily manipulated. Regardless of that--he is at least somewhat faithful to Rock and his friends. GH: The past two year's worth of stories have really upped the danger levels. The Absorbanoids' invasion gave a real sense of doom for the likes of Tierra, Maxine, Rock and Widow. Has this been a conscious effort to make the book really feel like no one is safe like in the early days? EL: Yeah, there's been a conscious effort not to make it feel as though anybody is safe but honestly--I don't know that there's ever been a time where things seemed safe. I've gone through a lot of characters over the years. GH: I guess Rex won't be getting his real body back after all? EL: Not that one, no. GH: With the end of this issue, there's another sense of closure. This will be the last chapter in the next trade, The Kids Are Alright. Have you been changing the way you write to make the trades read like mini-epics in a bigger opus? EL: To some degree, yes. I'm certainly aware of where trades begin and end. I don't pad stories to fit a trade, mind you but I do try to have things end on a nice note. But then--I always have to some extent tried to make it so any isolated stretch of issues read well. When I did the recent Dragon War arc it ended up being split over two books with two parts at the end of one trade and four in another and they still read fine either way.