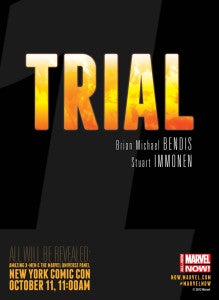 Marvel has released a one-word teaser for an upcoming story by Brian Michael Bendis and Stuart Immonen: "Trial." But unlike many such teasers the publisher releases, in which fans only know that more news is coming, this one has a date and time attached. "All will be revealed," it says, at New York Comic Con on October 11 at the Amazing X-Men and Marvel Universe panel. As part of the All-New Marvel Now initiative, there's a #1 in the background of the image--which along with the word trial makes us wonder whether this might be a reinvention of the Free #1 promotion Marvel ran earlier this year--but if that were the case, it wouldn't need a specific creative team listed. What may be another possibility is that Cyclops will go on trial for his actions in Avengers vs. X-Men.