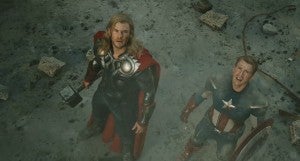 You know there's an exciting panel when a famous actor rolls out onto the stage filming the fan response to his own entrance. That's exactly what happened at tonight's New York Comic Con panel for The Avengers film. As Chris Evans, Tom Hiddleston, Mark Ruffalo, Cobie Smulders and Clark Gregg entered the stage, Ruffalo filmed the fans on hand at the panel with his smart phone. Both Evans and Hiddleston had a great deal to say about their wardrobe, with Evans telling the audience that while he loves his Captain America costume, his favorite filming days were the ones where he got to wear a simpler, more bathroom-friendly wardrobe. He said that once he was on the set of The Avengers as opposed to Captain America's own film, he felt better about his wardrobe situation because he got o watch the actors playing the Asgardian characters negotiating their even-crazier costumes. Hiddleston added to it, ""My day started with getting strapped into Loki's metal and buckles." Clark Gregg told the audience that he had never expected the Agent Coulson character he plays to become such an important character, saying that each subsequent movie he was in leading up to The Avengers came as a surprise to him. "This is our generation's Hamlet...everyone's going to get a shot at the part," said Mark Ruffalo of The Incredible Hulk, his role in the film. His performance, he said, owed a lot to the previous actors to play Bruce Banner going all the way back to Bill Bixby. The panel screened a bit of footage with Ruffalo as The Hulk, although none of that was made available outside the room. A bit of footage screened in the film ended with Robert Downey, Jr.'s Iron Man arguing with Hiddleston's Loki over whether the Asgardian's army or The Hulk is a better asset for their respective teams. That was followed up by a discussions of some panelists' favorite superhero characters. Gregg said that it was a toss-up between Thor and Agent Coulson. Ruffalo also revealed that even in the movies, S.H.I.E.L.D.'s helicarrier is the base of operations. A producer on hand for the panel added hat the post-credits "PS" sequence that's happened in recent Marvel movies will carry over to this film. In terms of building a larger Marvel film universe, it was revealed that in the same way Iron Man stared the creation of the Marvel film universe, Iron Man 3 would set the standard for the next phase of the characters, where new characters would start to be introduced and building toward an Avengers sequel would be possible.