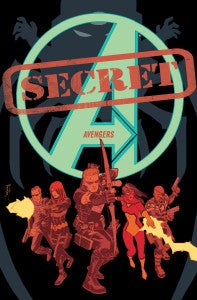 As they did this morning at the Amazing X-Men panel, Marvel Comics announced this afternoon a number of new #1 issues and pseudo-#1 issues that will roll out over the next few months of the All-New Marvel Now. What came out of the Avengers panel this afternoon? Well, here's a rundown: Avengers #24 will be Avengers #24.NOW/Avengers #1. The book is slightly oversized at 30 pages and ships on December 24. The "Mindbubble" teaser released earlier this week that teased Rick Remender, Pascal Alixe and Nic Klein was a teaser for the next volume/arc of Captain America, kicking off with Captain America #16.NOW/Captain America #1. Doctor Mindbubble, introduced in #17, is the new villain of the arc. Sam Humphries and Andre Araujo's "Extinction" teaser was for Avengers A.I. #8.NOW. "Frenemies" by Ales Kot and Michael Walsh was the first teaser for a genuinely new series (of Secret Avengers) with a new #1 announced at the panel. "It's close to what Spider-Woman and Avengers Assemble feels like," said Kot. "We're very much going back to the mission statement of Secret Avengers: don't get seen, run the mission, save the world and don't get as many things broken as you did the last time." Spider-Woman, Black Widow, Hawkeye, Agent Coulson and Nick Fury, Jr. are a part of the cast, with another, as-yet-unannounced member. Kot added, "One to two-issue stories that will have strong connective tissue. This means that, over time, things that might have seemed unimportant at first gain much significance, creating a bigger story. Hawkeye does it very similarly." 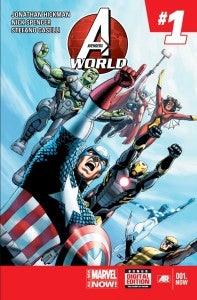 Avengers World was up next -- Jonathan Hickman, Nick Spencer and Stefano Caselli's new ongoing series. The book will launch monthly, alternating what used to be Avengers's every-two-weeks schedule with the now-monthly Avengers. "This is the Avengers coming back after Infinity," Spencer explained. "It's about exploring the landscape of Earth." That landscape has been teased as somewhat different, certainly; they've teased the possibility that America might not exist, and of course there's a whole new race of Inhumans. "The Avengers have gotten bigger in that they feel this has got to be an Avengers World," said Brevoort. "We'll see more of that as time goes on. It won't be completely like Ultimates per se, but we'll see Avengers all over the place." "You're going to see the Avengers show their hand," said Spencer. "You're going to see them tighten their relationship with S.H.I.E.L.D. and it goes very, very bad." 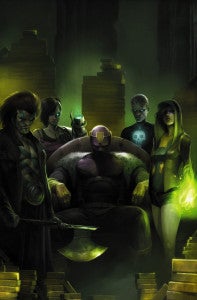 Dennis Hopeless and Kev Walker's next project after Avengers Arena wraps will be Avengers Undercover. "The characters who survived Murder World came out the other side much different than they went in," Hopeless told Comic Book Resources. "Those psychological scars from the Arena weigh heavily on all of the kids. They don't fit so well into their old lives. They no longer feel like they belong and they're all looking for a way to get back what they've lost. All of this leads them down the path of Avengers Undercover." They also mentioned the Black Widow and Loki: Agent of Asgard titles that we already knew about.