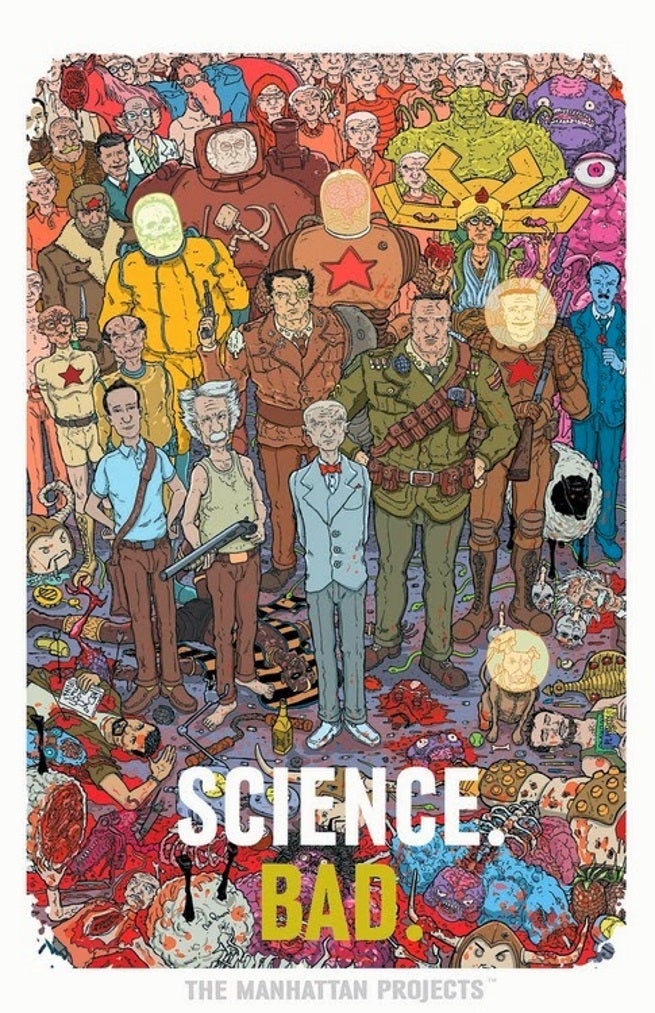 The Manhattan Projects is kind of an insane comic, let’s be honest. The series follows a secret organization of super geniuses pursuing various ends and interests, through scientific experimentation and exploration into other dimensions, and this is all occurring during the 1960s, an era best known for the rise of television and a trip to the moon. There’s alien creatures, talking canine cosmonauts, and characters who gain knowledge through the consumption of flesh, human or otherwise.

The series is written by Jonathan Hickman, and Nick Pitarra is the artist who somehow brings it all to life in a way that makes sense. Way back at San Diego Comic-Con, we had the opportunity to speak to Pitarra about what it’s like working on such a unique and unpredictable series.

Recently, in The Manhattan Projects, Laika was transformed into a humanoid. Are you prepared for all the colorful new kinds of fan fiction you’re going to have sent to you?

See, I’m going to go on the record with this. When I read the script – and that’s a Ryan Browne drawn issue, but I get to read the scripts and everything first – I love Laika, and Laika does everything she needs to do in her current, non-half-human state. She has a gun, she talks, she’s cool, she’s lovable. So, for me, because I’m maybe a pervert, if you make her more human, Yuri - who is the first cosmonaut in space, and Laika, of course, is the first dog in space – and he’s always saying he loves her, you’re only making her (and you’re going to have to edit this out) more f***abe, right?. So then I called Jonathan on that, and I said, “I don’t know if I like this,” and he told me “don’t worry, it will be okay.” So hopefully we’re going to go to good places, but he said don’t worry.

So he hasn’t actually told you why he did that?

He has not told me why. I know he wanted more of a fun, humanoid character. Something a little more sci-fi, you know, like if you think about Star Wars or something. I’m thinking along those lines. But they better not procreate. That was my rule. I called and was like, “do not have them…,” and he was like “I’m not a pervert.”

The Manhattan Projects is a book that is full of weird ideas and crazy science fiction concepts. Do you ever look down at your drawing table and kind of wonder “what have I done?” or “how did I get here?”

Yeah, there’s a lot of stuff. A lot of its Jon, and a lot of is me. But thinking about it, even in issue #23, that I’m illustrating now, Lydon B. Johnson goes to meet JFK, and the script just says they’re just talking and JFK’s a little paranoid. But we’ve established that JFK’s a drug addict, so I have it in the Oval Office, and there’s all this drug paraphernalia, and there’s a dead hooker, and all this crazy stuff. So sometimes, you’ll get up, and you’ll go have coffee, and you’ll rest after being involved in the drawing for a long time, and you’ll come back and you’ll look at it and you’ll be like, “what am I doing? This is insane!” If you told 12-year-old me that he’d be drawing presidents and dead hookers, and all that stuff. It’s a lot of fun. It’s a whole lot of fun, so I’m always blown away. Sometimes, in the grind, you forget what you’re actually doing half the time, but it’s totally cool, and rewarding, and crazy.

The Manhattan Projects is a book where, literally, I never know what to expect to come out of it every month. What’s the creative process like with you and Jonathan Hickman, and how you come with all of that crazy stuff?

We work “Marvel style” now, but it’s not “Marvel style” in the sense that…it’s “Marvel style” in the sense that I’ll get a page description that I need to draw the issue, but everything is heavily plotted. So Jon knew the ending to the first trade, all the way up until issue #20, when [spoiler alert] Einstein comes back. All that’s plotted out, but how we get there is all “Marvel Style,” or a big chunk of it is “Marvel style.” So there might be four pages where he’s having a conversation in the oval office, and he gets the pages back and there’s dead hookers and crazy stuffed animals running around. So there’s that bit of fun playfulness. I think why The Manhattan Projects works for the fans is that Jon is more of the heady writer, and then, with me, I add more of the humor and the silly stuff, and my stuffs very cartoony. So you’re able to swallow the sci-fi stuff because you get this pill of silliness with it, and it’s found its groove or it’s found its readership through that tone. So I think it’s just us mellowing each other out and playing off of each other in a good way.

I think both of your styles come through pretty strongly, because, even though Hickman’s voice is definitely still there, The Manhattan Projects feels, tonally, very different than his other work.

Yeah, it’s like, instead of reading it and having to think, you can read it and just sit on the toilet. That’s what I always tell readers.

You mentioned that Hickman knew where you were going, from the beginning up through at least issue #20. How far along have you plotted things out now?

I moved to South Carolina for a while and Jonathan and I plotted. I know there’s a big thing established in the first 20 issues that’s going to come back, and it’s something we lightly hinted at, but it will be a big thing maybe 20 issues down the line. I know that’s like a big catalyst moment in the book. Its ongoing, there’s not an end, per se, but that’s going to be one of the big events, one of the big sci-fi war events that we’re going to get to later. But as far as how we’re going to get there, and the little nuances of stuff, sometimes it’s literally, you know, we’ve got JFK. JFK is going to get assassinated, so the historical timeline is going to dictate that we handle that at some point. And sometimes there are things that we’ve organically plotted that’s going to play. So it’s just how we’ve weaved all that together, though his smarts and through my stupidity, we kind of meet in the middle. 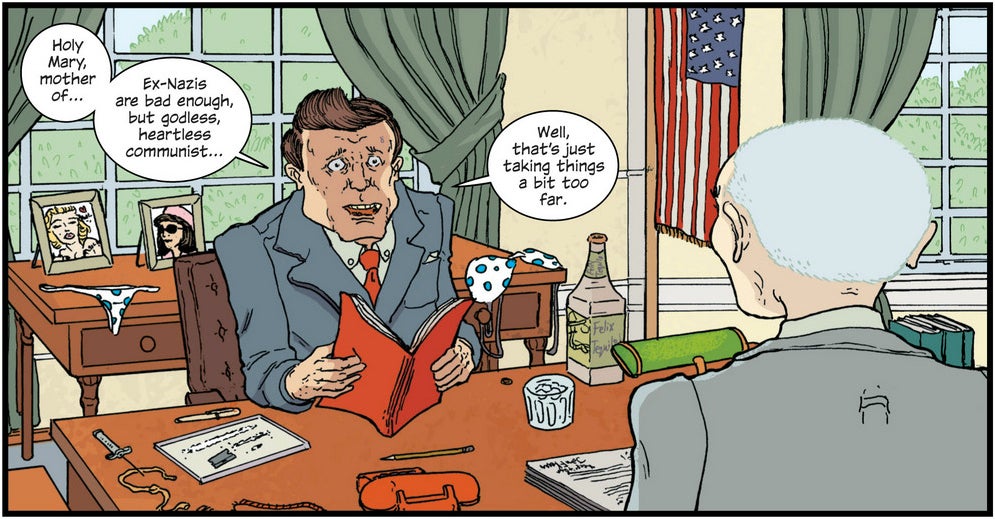 It’s easy to sometimes lose sight of the fact that The Manhattan Projects is technically a historical fiction series.

Yeah, it does go crazy.

Are there any other historical events that you’ve planned to incorporate into the story?

Definitely the JFK assassination. You see some stuff established in issue #22 for that that will play out down the line.

Do you feel like The Manhattan Projects is the kind of story you could only get away with in comic book form? Could you ever see it being adapted to television or film?

There have been some people interested in adapting it, and there have been some phone calls, and they’re really cool people, some of my favorite people, creatively, I’ve ever heard of, but, ours might be the one book that only works in comic book form, to tell you the truth. I don’t know how you do it. Like you said, it’s always a surprise, every month. Would you be able to do a TV show and build up a viewership, not knowing what you’re going to get every week?

It’s so comic booky, the way it’s made, the way things are happening in it, the timeline stuff. There’s some coherent storylines. A lot of times it’s just fun, and there’s not, really, a point, unless the reader just projects that into it. We’re handing you a theme, other than “scientists are assholes.” I love that the back of the book says “science bad,” and that we haven’t deviated at all. It’s just all horrible stuff. So that’s great. The back of the book is two words, and we’ve stuck to it, in retrospect. 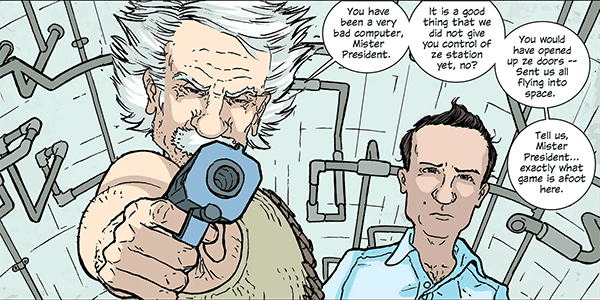 You say “science bad,” and yet you have an Albert Einstein who looks like John McClane.

Yeah, yeah! I’ve got him acting like Rambo, and John McClane, and yeah, it’s just crazy fun stuff. There’s a blue monster that Einstein made, and you can see how he looks kind of Predator. It’s just taking your life experiences and puking them into the book, and readers seem to either like it or not like it, and, at 23 issues, we’re doing well, so they must like it.

Is there anything else you’re working on at the moment, or are you just 100 percent focused on The Manhattan Projects for now?

I do Ninja Turtles covers sometimes, I’m doing covers for Oni for a book called The Life After.If I do any more than that, Jonathan will kill me, so yeah. That’s about it. I do the occasional cover, and sometimes a one or two-page story for friends, but that’s about it.

Out of all the scientists and alien creatures you’ve designed for The Manhattan Projects so far, do any stand out to you as favorites?

I love the aliens, but all the designs for the human characters are fun too, because I purposely try to make myself draw them weird, so they would look different. The Simpsons do really nice silhouettes with their characters, so if you blackout a character you can tell who they are still. I think, in my early work, I wasn’t aware of that, or thinking about it. Now, on this one, you can blackout the shape of almost anyone and they look different, and I think that’s strong, as far as telling a story and the reader isn’t distracted. They can just be subconsciously aware of the shape and know whose talking. They can look at the details and enjoy it, but, to move the story along, it’s not good to be too plain. So that’s something that I was really proud of that most people don’t know, because it’s a subconscious thing.