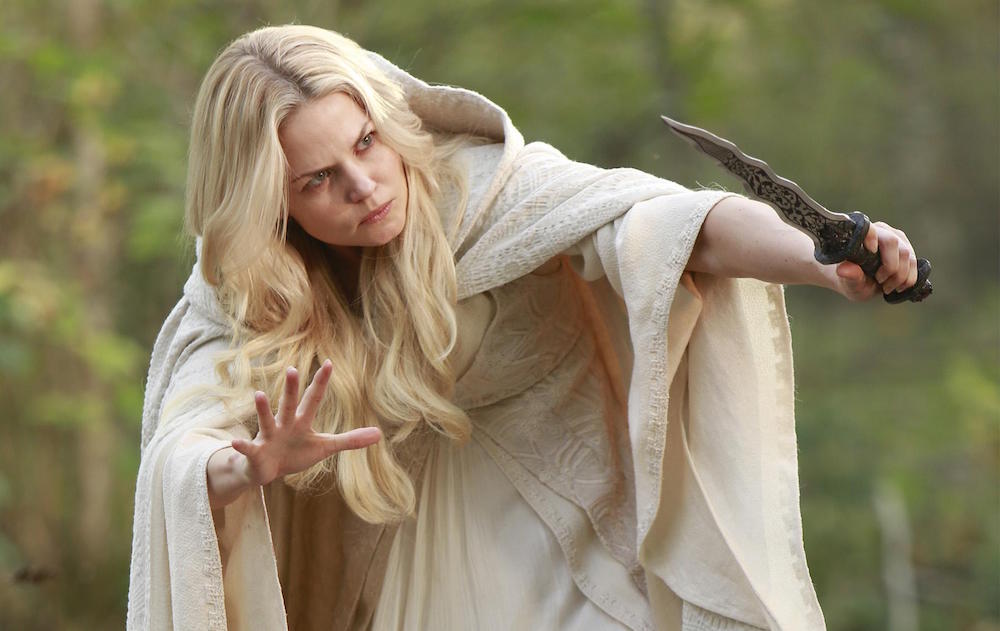 The eighth episode of this season, "Birth," opens in modern day Storybrooke with Charming (Josh Dallas) confronting Arthur (Liam Garrigan), asking why he burned the crimson crown and for more information about the mysterious Nimue. Arthur bolts, and Hook (Colin O'Donoghue) is barely able to catch up, only finding himself at the wrong end of Arthur's blade. Emma (Jennifer Morrison) saves him – with Excalibur, much to Arthur's amazement. Hook begs Emma to reveal more about her plan and intentions with the sword. She cryptically responds, "I'm doing it for you," before disappearing in a poof of magic.

Hook later questions a now-imprisoned Arthur, but he tells them nothing. Regina (Lana Parrilla) and Snow (Ginnifer Goodwin) are hesitant to believe that Hook is Emma's true motivation, with Regina assuming Emma must be an ingredient or two away from using Excalibur to snuff out all the light magic. Then, Regina and Robin (Sean Maguire) are called to the prison, where Zelena (Rebecca Mader) has gone into labor thanks to Emma's dark magic – despite the fact that she's only been pregnant for two months.

Three weeks ago, near Camelot, Emma returns to Granny's with the spark from Prometheus, to find only Henry (Jared Gilmore) waiting. He admits that no one else returned to the restaurant, and suddenly, Henry is frozen. Merlin appears, now under Arthur's control. He explains to Emma that he is now tethered to the hilt-half of Excalibur and that Merlin will only free her friends and family if she gives him the dagger-half, as well as the spark – which she will need to ignite into a flame for Arthur.

Emma tries to ignite the spark, which can only be accomplished if one "gives up the darkness" within, but she struggles. Henry tells Emma that Hook has made plans to move in with her once everything blows over, with a house already picked out. Nearby – Charming, Snow, and Hook are bound to trees, while Arthur, Merlin (Elliot Knight), and Zelena stand nearby. Emma gives Zelena "the flame," but when she opens it, a magic spell tethers her to another tree. Arthur orders Merlin to fight Emma, and his magic quickly overpowers her. Next, Arthur commands Merlin to kill Snow, but he suddenly overcomes the dark magic, mid-strangle. Hook then breaks free and steals the sword, and Arthur and Zelena escape.

Later, Emma and Regina have a heart-to-heart about being strong and rejecting the darkness. Regina demands that Emma tell her why she's clinging to the darkness, invoking the power of the dagger, but Hook and the others stop her. Emma eventually admits to Hook that she's anxious about their future, worried that she might lose him. After she confesses her feelings, the spark finally ignites into flame. 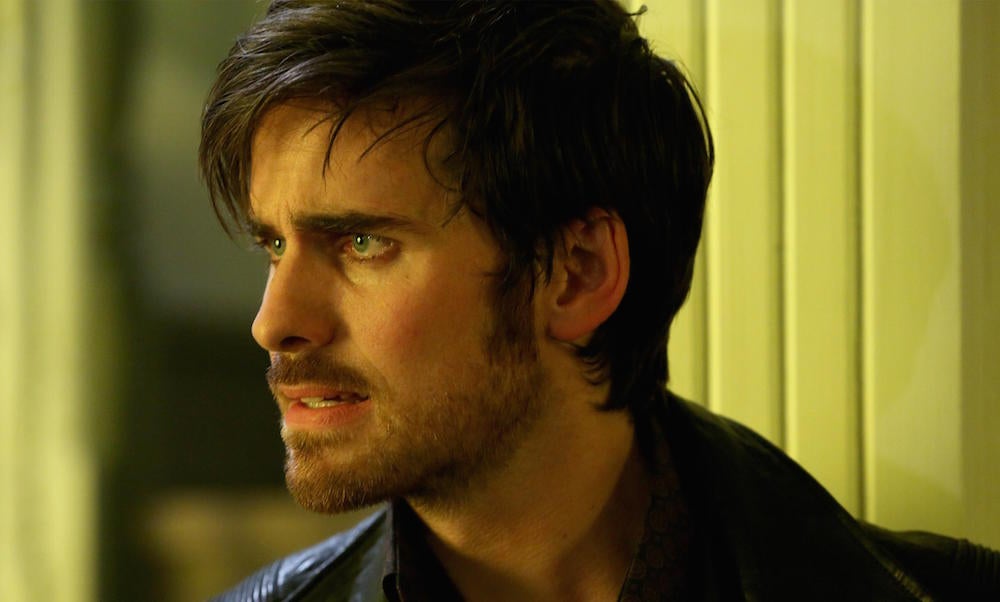 Back to the present, where Emma has brought Hook back to her home – after he jumped off a building to force her to appear and save him. She reveals that her new home is actually the one he had chosen for them in the past, and she claims that everything she has done has been for the sake of their relationship. Then – after saying that, if he knew the truth, he would stop her – they kiss, and Hook suddenly falls unconscious to the ground. Meanwhile, at the hospital, Dr. Whale (David Anders) is ready to deliver Zelena's baby, when Belle and Snow appear. It turns out that the only ingredient Emma still needs to destroy all the light magic is "the cries of a newborn child."

Zelena successfully delivers a baby girl, and though Emma quickly appears at the hospital, she claims to be after a different baby – teleporting Zelena away with her. Back at Emma's house, Hook wakes up, chained to the ground next to Zelena. Emma admits that her plan has been to destroy the dark magic inside her, not the light magic of the world. However, the dark magic has to be contained into a vessel. She plans to put it in Zelena – sans baby in her belly – and then kill Zelena, vanquishing the dark magic. Hook does not approve, and once Emma leaves, he uses the remaining magic in his hook to free Zelena and she frees him in return.

Outside the house, Regina is ready to wage war on Emma, especially after she reveals her intentions with Zelena. Once Emma comes back inside, Hook freezes her with squid ink, but then, Zelena stabs him and forces him to watch Emma's memories from Camelot in the dreamcatcher.

Back to the flashback, where Emma and all of the others have met at Granny's. The two parts of Excalibur are presented in front of her, along with the ember, and she begins to combine the pieces. Suddenly, Hook starts bleeding from the neck – where he was barely cut earlier with Excalibur. Merlin admits that there's nothing they can do to stop his bleeding, as Excalibur is just too powerful. Emma wants to use the flame to release Merlin from Excalibur and tether Hook instead, so she teleports him to a field, far away, where he begs her not to. Before Hook can say much more, he seems to die. Emma uses her magic to tether him to the sword – killing Merlin, keeping Hook alive, and making him the new Dark One.

Upon seeing this in the dreamcatcher, Hook is devastated. Emma says that everything she done since they returned has been to save him, but he responds that they clearly have a very different definition of "save." Zelena asks Hook if he's ready to learn what else happened in Camelot. He replies, "aye – but first we have to take care of her," ending the episode "Birth." 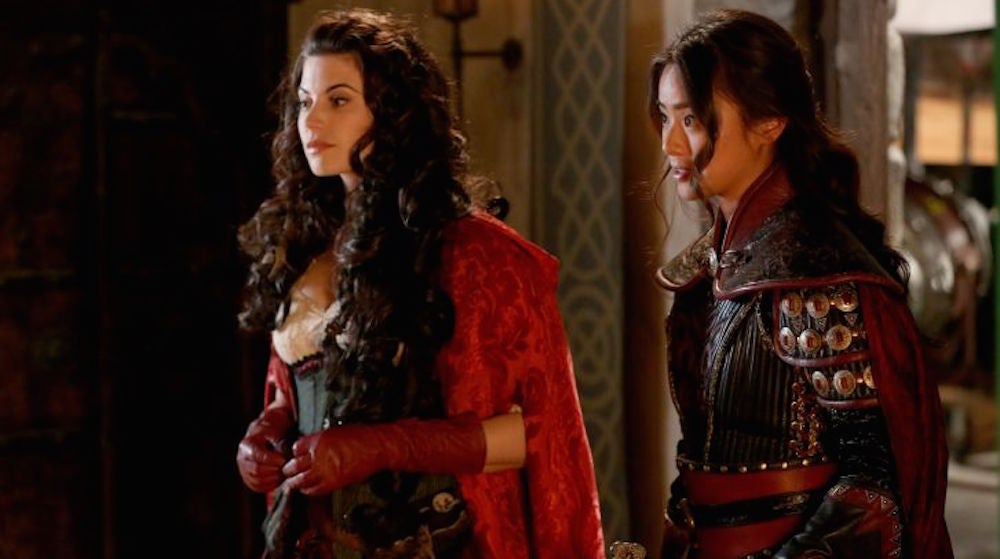 The ninth episode, "The Bear King," opens with Zelena and Arthur back at his castle in the Camelot flashback. He tells her that there's something that can help them in another land: DunBroch, to where the episode then cuts. In an even further back flashback, Merida's father, Fergus (Glenn Keogh), meets with the witch who gave his daughter the spell of Mor'du, and the witch gives him a bewitched helm. Two years later, on the day of Merida's coronation – the witch interrupts the ceremony, revealing that Fergus never paid her the money he owed before he died. If Merida doesn't find and return the helm, the witch will turn the entire kingdom into bears. Fortunately, Fergus was wearing the helm when he was killed in battle, so his killer may still have it.

Back again to when Fergus was alive, we see him tell Merida that he recently hired a warrior to teach her to fight. Merida finds this insulting, quickly picking a fight with the guard to show that she doesn't need him. She loses the battle and discovers that the guard is actually a she: Mulan (Jamie Chung). Overtime, Mulan trains Merida to be an excellent fighter, though the men in their village still do not respect them because they are women. When invaders come to the village, Fergus puts on the helm and leads his army bravely, while trying to keep Merida out of the battle. She arrives anyway, just in time to see her father killed. Merida shoots an arrow to stop the assailant, but misses. The killer takes the helm, and when he lefts his own, we see that Fergus's killer was, somehow, Arthur.

Next, in the Camelot flashback, Arthur and Zelena go to the witch's home, demanding that she give them the helm. Once they threaten her, she reveals that if anyone has the helm, it's Merida. Nearby, Merida recruits Mulan to help her family, though Mulan seems a bit more pre-occupied with money than she did before. Merida has a bit of Fergus's killer's cloak, which she plans to use to track him. Arthur and Zelena find them, and Arthur explains that the helm forces people to find for the wearer. Zelena steals a bow that Fergus gave Merida, with which she similarly plans to track the helm. Knowing the truth about Fergus, a discouraged Merida abandons Mulan and goes home.

Then, Mulan goes to the witch's house, where she is attacked by the wtich's "pet wolf." Mulan realizes that the wolf isn't real and, using a magic potion, returns the wolf to her true form: Little Red Riding Hood, or Ruby (Meghan Ory). The two walk and talk, and Mulan asks Ruby about her time traveling between worlds. In yet another flashback, shortly after baby Neal was born, Ruby admits to Snow that she feels like she doesn't fit in and plans to return the Enchanted Forest. However, once she got there, everyone she knew was gone, and soon after, she was bewitched.

Mulan and Ruby arrive at Merida's home just as she as about to give the crown to the leader of another clan, which will no longer be necessary; Ruby can sniff out the helm, thanks to the torn piece of cloak. Ruby leads Merida back to Arthur and Zelena. He admits that he did kill Fergus on the battlefield, during one of his many quests in search of magic and the pieces of Excalibur. He also admits that the helm he took off Fergus wasn't the bewitched helm – which Fergus never did use to manipulate his army, but he did find the actual helm in the river. A swordfight begins between Arthur and Merida, and before Mulan has to join the fight, Ruby throws sleeping powder on Zelena. Suddenly, the other leading members of Merida's clan appear, arrows pointed at Arthur. Zelena uses her magic to teleport herself and Arthur away, back to Camelot, leaving the helm.

Merida's subjects finally embrace her as queen, and another coronation is held. The witch again interrupts the ceremony, and Merida freely offers her the helm. But then, the witch reveals that the helm was never bewitched at all; it was all a trick to teacher her to lead, just like Fergus wanted. Later, Mulan tells Merida that she has been suffering from a broken heart, and Ruby offers to help Mulan get over her grief by taking her on a journey. And then, Merida uses a potion gifted to her by the witch to talk to her father from beyond the grave. He tells her that she has made him proud, and then, he fades away.

Once Upon A Time Season 5 Episode 8-9 Recap With Spoilers: 'Birth' and 'The Bear King'