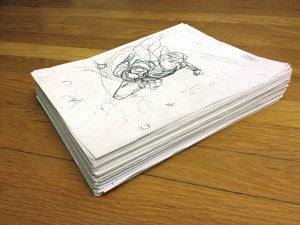 Chris Sprouse, the veteran artist solicited to draw science fiction icon Orson Scott Card's Adventures of Superman story, has withdrawn from the job and will no longer draw the issues, reports USA Today. "It took a lot of thought to come to this conclusion, but I've decided to step back as the artist on this story," Sprouse said in a statement released Tuesday. "The media surrounding this story reached the point where it took away from the actual work, and that's something I wasn't comfortable with. My relationship with DC Comics remains as strong as ever and I look forward to my next project with them." The withdrawal means that the Orson Scott Card story will no longer launch the title; instead, it will feature a story by writer Jeff Parker and artist Chris Samnee, as well as a tale by Jeff Lemire and one by writer Justin Jordan and artist Riley Rossmo. Samnee's variant cover for the first issue is the only officially-available piece of art yet released for Adventures of Superman. 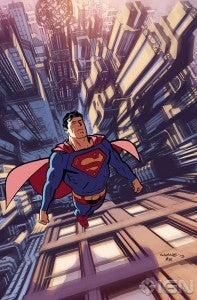 Card, whose work with groups opposed to marriage equality and his anti-gay writing has made his work a lightning rod for controversy, has been the subject of a number of boycotts, first from the activist group AllOut and then from a number of readers and retailers. An online petition by AllOut to remove Card from the title has garnered more than 16,000 signatures at present. DC has steadfastly refused to be swayed, and the artistic change will not discourage the publisher from working with Card.

"We fully support, understand and respect Chris's decision to step back from his Adventures of Superman assignment," the company said in a statement. "Chris is a hugely talented artist, and we're excited to work with him on his next DC Comics project. In the meantime, we will re-solicit the story at a later date when a new artist is hired."

That next project might well be Tom Strong; when he recently uploaded an image of a stack of his Superman art (not for this project, but for Action Comics backups), Sprouse promised his fans they'd hear some news on the long-delayed project soon. In addition to his more notable prose work, Card has worked in comics a number of times over the years, most notably writing a best-selling but critically maligned run on Ultimate Iron Man. His Ender's Game was adapted for comics in 2008 by Marvel and is currently in production as a feature film starring Harrison Ford.