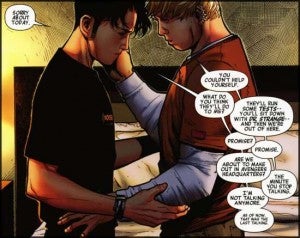 GLAAD, the Gay and Lesbian Alliance Against Defamation, has released their annual awards nominees, which run a vast gamut of categories from film, to television, to documentary and even to newspaper articles.  Also in that list of nominees are five comic book series, each vying to be the recipient of the award for Outstanding Comic Book.  This year marks the 23rd annual list of nominees for the GLAAD Media Awards, and the comic books nominated for this year's award come mostly from Marvel and DC, with one notable, and perhaps surprising to some, addition. The nominees are Marvel's Avengers: The Children's Crusade, which features openly gay and actively dating teenage characters Hulking and Wiccan from the Young Avengers.  Also from Marvel is X-Factor, which also includes a male to male romance between longtime characters Rictor and Shatterstar.  Two other nominees for the award come from DC Comics.  Batwoman, featuring the adventures of Kate Kane as Gotham's newest protector, has not been afraid to mix the heroine's dismissal under Don't Ask Don't Tell with compelling artwork and storytelling about her war against the Church of Crime, and Secret Six, which featured an interesting relationship between villains Scandal Savage and former Fury of Apokolips, Knockout.  Last but certainly not least, Veronica Presents: Kevin Keller, which comes courtesy of Archie Comics.  The company has been expanding their diversity and inclusion of current events over the past two or three years, so the eventual inclusion of a gay character was no surprise. The winner of this award, along with all the others, will be announced at various ceremonies throughout the months of March, April and June.  Stay tuned for results of who wins!