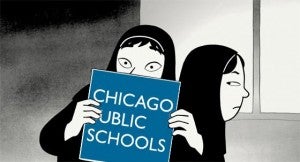 Following the revelation yesterday that the Chicago Public Schools were removing copies of Marjane Satrapi's autobiographical graphic novel Persepolis from classrooms and libraries, ComicBook.com reached out to a number of people and organizations who were hesitant to comment until the reasons behind the removal--which early on were alleged to be a clerical error--were more clear. Today, the Chicago Public Schools issued a statement that the book was not being removed from school buildings or libraries, only from the seventh-grade curriculum and those classrooms. However, it is "under review" for grades eight through ten, which implies that it's off the table for those students for the time being as well. Moments ago, we received an official statement from Knopf Doubleday, the parent company of Persepolis's publisher, Random House. "The Chicago Public School district has issued an ambiguous statement regarding the present and future availability of Marjane Satrapi's Persepolis to students," the statement read. "Persepolis is a coming of age memoir about a girl in her early teens. The book has been read and taught in school districts across the country, without caveat or condition. In addition, Marjane has met with students across the country, including students in Chicago. The fact that Chicago is trying to limit this book's use in classrooms and curriculums, suggesting teachers need guidance before they can discuss it, smacks of censorship." The National Coalition Against Censorship, The Kids' Right to Read Project and the Comic Book Legal Defense Fund were among a number of individuals and organizations who signed a letter to the Chicago Public Schools today, siding with Satrapi and her publisher against the administrators' actions. The letter, in part, said:

On behalf of the Kids' Right to Read Project, we strongly urge you to reconsider the recent decision to remove the award-winning and critically acclaimed graphic novel graphic novel Persepolis from 7th to 10th grade classrooms in Chicago Public Schools. Persepolis, Marjane Satrapi's unique and affecting memoir of her childhood in Iran during the Islamic Revolution, has been taught in many classes in the Chicago Public School district and across the country. A work of great acclaim, School Library Journal called the book "a graphic novel of immense power and importance for Westerners of all ages." To remove this book because of objections to its content is impermissible under the First Amendment. As the Supreme Court has said, the constitution does not permit "officially-prescribed orthodoxy" which limits what people may read, think, speak or say. The fact that weare confronted with images and not words does not make a difference—the courts have ruled that images, like words, are fully protected by the First Amendment.

A request to speak with Satrapi about the incident is pending.