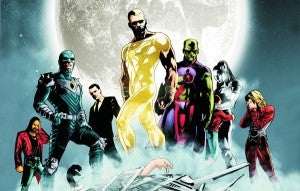 While Hellblazer scribe Peter Milligan will no longer be writing the DC Universe's version of John Constantine when Jeff Lemire takes over Justice League Dark in May, it seemed unlikely that he would stay quiet for long. With his impressive resume and great reputation with fans and critics, it seemed inevitable that Milligan would get a third monthly (behind Hellblazer and Red Lanterns) sooner than later. It was, however, hard to guess how soon. Two hours after DC made the Justice League Dark announcement, it followed up with a blog post indicating that Milligan would take over Stormwatch with its ninth issue. After six issues by Paul Cornell, Paul Jenkins was announced as the fill-in writer for #7 and #8 and had previously voiced interest in staying aboard longer than that. Apparently DC had other plans in place, though, because they've been teasing coming events in Stormwatch for some time now. "Stormwatch has the craziness, the paranoia and the occasional bursts of odd humor that really grab me. This is my kind of book," Milligan told The Source. "When I re-read Paul Cornell's excellent first series with a view to taking over the writing duties I was really excited. And I'm excited too by what I have planned, from Stormwatch facing a ferocious character from the Red Lantern Corps, to hidden secrets being revealed about the origin of Stormwatch, and some shocking revelations about the mysterious Shadow Lords. It's going to be a very intense ride. Stormwatch has been dubbed the DC title to watch by many industry types after the revelation that the title would feature Pandora, the mysterious, hooded woman from Flashpoint. It also seems to be a hub for activity that will connect Dan Jurgens and Keith Giffen's upcoming Superman run with the former WildStorm Universe titles (including Grifter and Voodoo), as longtime WildStorm baddied the Daemonites will wreak havoc in those and other DC titles in the coming months.

Peter Milligan To Take Over STORMWATCH