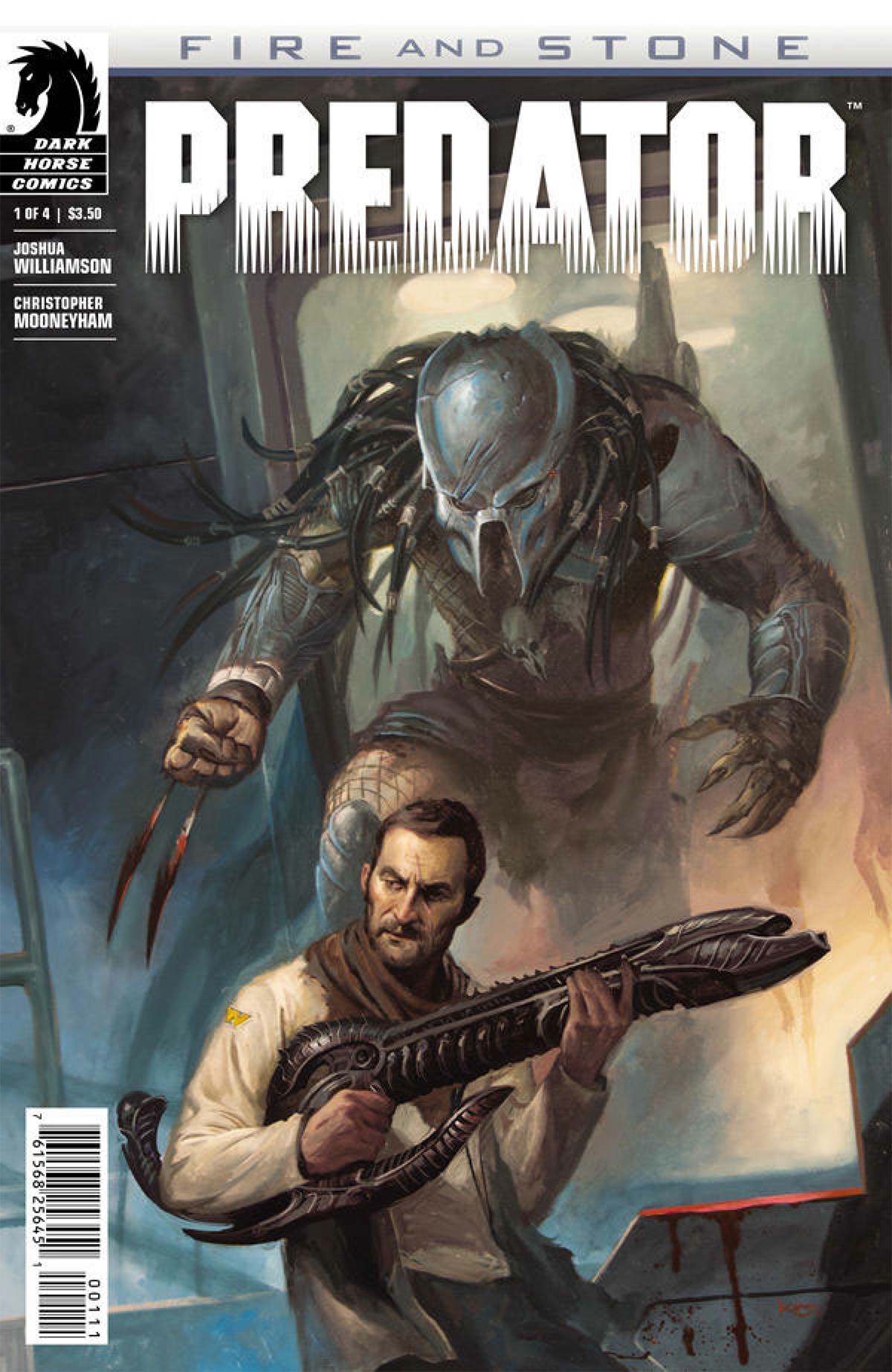 Predator: Fire and Stone #1 is the final new series to be launched as part of Dark Horse Comics' "Fire and Stone" collection of stories. It spins out of the previous events, but manages to find a starting point that is accessible without three mini-series of context. It picks up directly after the events of AVP: Fire and Stone #1 by transforming a loose thread into a feature story.

This issue plays out like a short Predator film. All of the components from the film franchise are present: a small group of well-trained men being hunted by a Predator in a dangerous setting. It's a simple formula and one that has been proven to work. Rather than sticking to this format, Joshua Williamson compresses all of the beats of a Predator film into the first issue. It is a fast paced, self-contained story that ends with a new hook for the rest of the mini-series.

The pacing and plotting of the first issue work well, but it is not a compelling story. There are three characters and none of them are likable. Williamson may be working with an already established cast, but that cast is composed of selfish, mean spirited mercenaries. Unlike Arnold Schwarzenegger or Danny Glover, it's hard to care about whether any of these men make it out alive. The only hook to continue reading is the twist that comes on the final page.

Chris Mooneyham's art is the highlight of the issue. Best known for his comic riff on the pulp genre Five Ghosts at Image Comics, he shows here that his style works just as well in space as on Earth. Mooneyham uses lots of sharp fast lines. His style lends itself well to action and chases. When characters are shown flying through space or trading blows with the Predator, there's a visceral effect to the speed in the panels. The kills in this issue are excellent. Mooneyham makes the big moments land. Faces, body posture, and gore all make for horrifying moments that will please horror and Predatorfans alike.

Here Mooneyham pushes himself to apply his style in new ways. The sequences in which the invisible Predator silently stalks the crew are much slower in pacing. He builds tension in these sequences by focusing on the dark setting of the spaceship. Steep angles and deep shadows twist the ship into a maze where the Predator could lie in wait behind any corner. His construction of this creepy, science fiction setting reveals a great amount of flexibility. Mooneyham also plays on a classic part of the film franchise using heat signatures to present the Predator's point of view. These panels effectively cue the reader into the invisible aliens position and increase the tension through dramatic irony.

Predator: Fire and Stone is a fine first issue. It accomplishes plenty, but doesn't leave much of a reason to return besides its overall effect on the "Fire and Stone" collection. Mooneyham's art helps to make up for what the characters may lack, creating tension and scares for men who may not deserve much attention. It's a mixed effort, but one that may be worth paying attention to for Mooneyham's blend of science fiction and horror tropes.