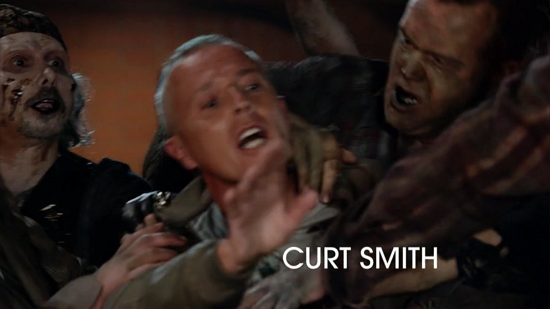 The episode opens in Gus's mom's car, where Gus is complaining about his love life; he's having trouble sleeping, and when he does, he has nightmares. Shawn pulls over to get gas down the street from a zombie fun run, and while he's inside, Gus sees Curt Smith from Tears for Fears pull up to the pump across the way. Moments later, Smith is swarmed by zombies and torn away from his conversation with Gus. One heads toward him, but he rolls up the car window, severing the zombie's fingers. After a moment, they all swarm the car while Gus screams and cries -- even Curt Smith is a zombie now, and he cracks the windshield. When Gus wakes up, he's in a hospital gown and being treated in dream therapy with sensors on his temples. The doctor next to him introduces himself as Dr. Simpson, and tells Gus that he got a lot of useful data out of his dreams. He keeps smacking Gus in the face with a giant flyswatter, which he says is "just part of the process," and then he asks Gus to tell him all about his nightmares. 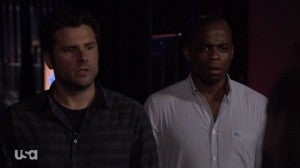 Psych Recap With Spoilers: A Nightmare on State Street