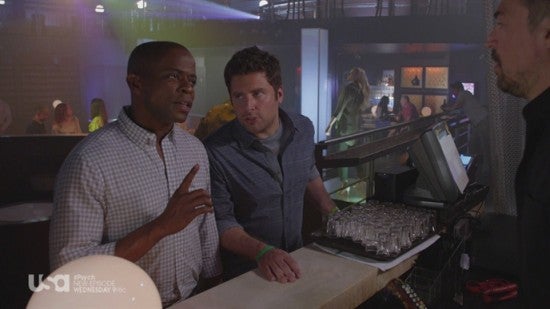 The episode opens on Gus, in his apartment, getting ready for his day and then making his way to the elevator at work. Once inside, he closes his eyes. A man behind him in the elevator attempts to get his attention and after a stern rebuke from Gus for interrupting his "23 seconds of peace," tells him that he has something on the seat of his pants. Gus's boss at Gulf Coast Pharmaceuticals is on his case the minute he steps out of the elevator. Back at the Psych office, the phone rings and wakes Shawn, but he doesn't get up to get it. At his office, Gus is asked to get a bunch of data together for his boss by the end of the day. At the Psych office, Henry comes in and wakes Shawn, who falls out of the hammock that he's for some reason got set up in the office. He tells Shawn that he's been paying for his (Shawn's) motorcycle insurance for years, since the bill keeps coming to Henry's house, and he starts to chastise him about mooching off everyone. Shawn tells him he'll pay the bill. Cut to Shawn, standing over the motorcycle in the garage and calling Lassiter for help getting a job so he can pay the bill. Lassiter turns him down and tells him that he's on the way to a suicide, and don't come. Shawn goes to see Gus at Central Coast and pulls him away for a lunch break visit to the crime scene to try and see whether there's any chance the guy was murdered. When they get there, the victim's house, clothes and everything else is eerily reminiscent of Gus's. He even finds a pair of tap shoes in th eman's closet, and begins to panic when he realizes just how many similarities he has to the dead man—and insists that the man couldn't have committed a suicide. Eventually, Shawn and Gus convince Lassiter to let them look into it—but he's not going to pay them. They head to John "Russ" Russell's workplace and find that nobody much misses him, but nobody had a problem with him, either. They talk to Russell's boss, who reinforces all of Lassiter's feelings that the man was just bored and lifeless and killed himself. Before they leave, they head to Russell's office to look for clues, but when another employee comes in to lay claim to the man's computer, Gus goes and makes a scene and gets them kicked out. During the process, he steals a key card from the janitor's cart and uses it to break back into his office. When they look at his computer, they find an e-mail that's written in code, using character names from The Net. He accepts the e-mail's request for a meeting with the stranger, who shows up and turns out to be a blind woman who hits both Shawn and Gus with her cane and makes an escape when they realize they aren't Russell. Next, they head to see Woody, who confirms Gus's suspicions that the suicide was staged. The pair follow clues on the corpse's person to a Russian nightclub, where they arrive and find the proprietor is a violent Russian gangster. 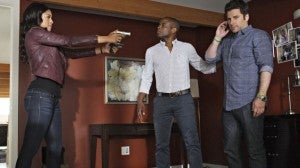 When Shawn and Gus head to Russell's apartment to look for clues, they find that it's been ransacked. Gus, knowing how Russell thinks, finds something in the man's bowling bag. It's a death certificate for a man whose name they haven't yet come across in their investigation. When they head to the house of the person on the death certificate to look for clues, they find a wall of photos of Russell; someone had been stalking him. Folded into the wall, though, is a photo of Shawn and Gus. Before they can make their way out, the blind woman shows up with a pair of guns trained on them. Turns out she faked her blindness; she's a private investigator he hired. When Woody calls in the middle of their argument, they reveal that Russell was force-fed the pills and the woman—named Emmanuelle—finally realizes that he's dead. The three of them drive to Woody's to find that the death certificate they have with them is a forgery for a man who actually died from gunshot wounds much more recently than the certificate says. Russell, an insurance rep, was looking into insurance fraud when he was killed. When he go to the wife of the dead man, she says that he started a male strip club recently using money from a high-interest loan, and that she couldn't get his life insurance payout because someone had already claimed it. When they go to check on the man who took over Russell's cases at work, he has some evidence for them of unusual payouts. As they make it to the car, though, someone tries to shoot at them. Shawn and Emanuelle take the evidence back inside, while Gus drives off in the Blueberry to attract the shooter. Shawn calls Lassiter for backup. Gus manages to hide his car behind a tree but when he comes out again, the shooter is still following. After a fender bender, The Blueberry's lights all go on and it won't start, then the shooter drives over it with his pickup, destroying the car completely. Before he can fire off a shot at Gus, though, Lassiter shows up and arrests the guy—the bartender from the Russian nightclub. 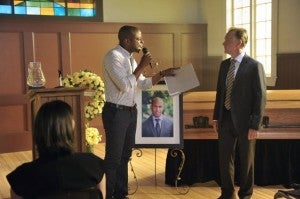 Shawn pieces everything together suddenly, and they head to California Coast Insurance and crash John Russell's memorial service, where they accuse the building manager of paying off death benefits to people who were still alive. Russell had figured it out, and was going to turn his boss in, so he had him killed by the Russians. After the expository speech, Lassiter arrests the man and Emmanuelle tells Shawn she thinks Gus is sexy. That afternoon, Gus struts back to Central Coast and quits his job in grand fashion. Shawn takes a day job tending bar at the Russian place, where he's serving Gus and Emmanuelle at the end of the episode. When he starts doing tricks with the bottles, though, he's fired.