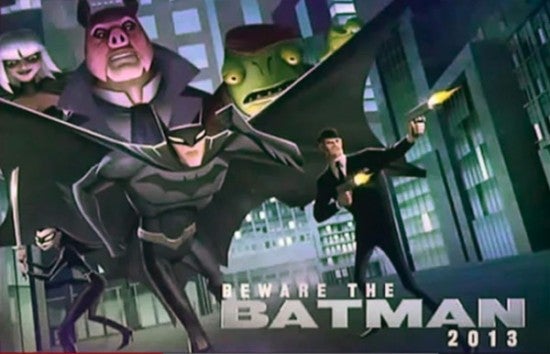 Last year, shortly before both Young Justice and Green Lantern: The Animated Series were cancelled, the shows disappeared inexplicably from the Cartoon Network schedule, reappearing months later to burn off their final episodes. Today, Nick and More--a Twitter account that follows chilren's television programming--claims that Beware the Batman has vanished as well, leaving Teen Titans Go! as the only DC-based series on the Cartoon Network's DC Nation block of programming. "In what seems like DC Nation déjà vu, new episodes of Beware the Batman have been pulled from Cartoon Network next weekend (repeats too)," they tweeted. "I have a feeling the backlash will not be anywhere near as loud as last time. 1) It's a week ahead & 2) many likely don't care as much." Of course, the "backlash" in question, particularly among fans older than the typical Saturday morning cartoon demographic, has included some fans who are still avoiding both Beware the Batman and Teen Titans Go!. Or at least going online and complaining about the replacement shows. Beware the Batman was expected to keep the struggling Katana comic book series--which featured a character who figured prominently into the cartoon--afloat, but that comic's cancellation was announced last week. What could it mean? Certainly it could just be that they genuinely need time to produce more episodes, or that this was an unannounced-but-planned hiatus. It's worth remembering, though, that there's reportedly a new Justice League cartoon--presumably a New 52-friendly one that will help Warner Bros. bring lesser-known characters they'd like to promote to younger audiences--being developed by Warner Animation legend Bruce Timm. Since up until now, there has only been two DC series on the DC Nation block at any time, some had wondered whether one or both of the new series might be in line for a short lifespan when the Justice League rumors started.