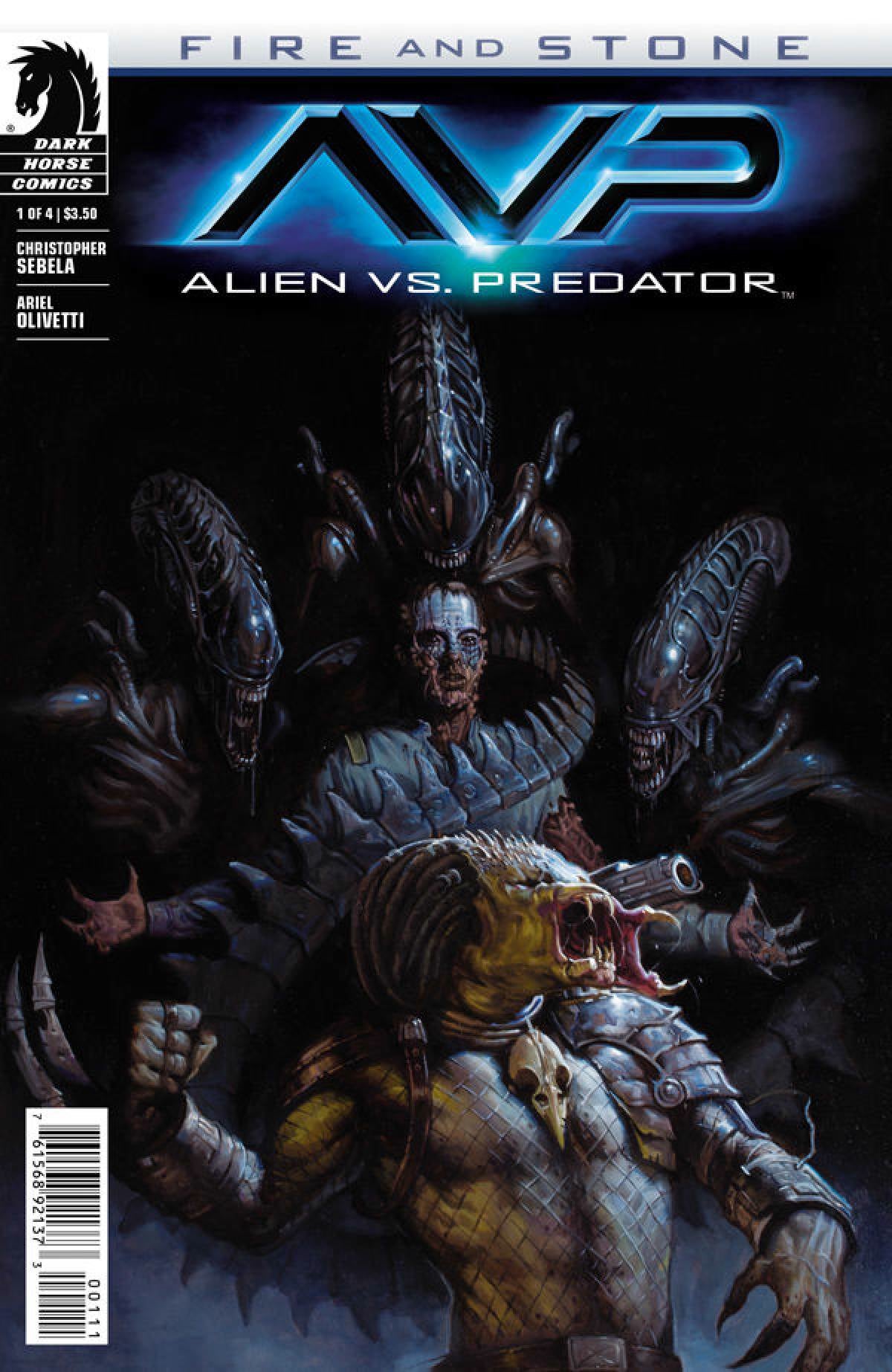 Placing the number one on the cover of a comic creates a promise. It proclaims that the issue is a starting point, one that any reader can pick up and comprehend. Like the first chapter of a novel or the pilot of a television show, it introduces characters and concepts that will be involved in a continuing story. When that promise is broken, it's a flaw with the comic.

AVP: Fire and Stone #1 picks up characters and plot points from Prometheus: Fire and Stone. That series is unfinished, so it's difficult to tell how closely it connects, but this issue appears to start at the conclusion of that series. This isn't inherently problematic, but the new series makes no attempt to re-introduce any characters or ideas. Reading this, without first having read all of Prometheus, makes it very difficult to understand.

After a showcase of predators hunting alien beasts, the comic shifts to the interior of three connected spaceships. In four pages, the central cast of this comic is introduced. Except they are not really introduced, it takes for granted that the characters are known quantities. The sequence seems to take place directly after some seemingly traumatic events. Galgo appears to be in control and the leader of those on board. He goes to speak with a prisoner, Francis, whose reason for imprisonment is referenced, but never explained. Finally, Elden, a grotesque humanoid appears and refers to other previous events and relationships with both characters. A lot is occurring, but none of it makes sense given the context of this story. The sequence that should introduce these three to readers, acts instead as if readers should have previous knowledge of who they are and what they have done.

That is not to say that the script is poorly written. The dialogue reads naturally and Sebela manages to create some tense scenarios. One of the final panels of the comic feels creepy and inevitable in the same way that only the best scenes in the Predators franchise can. The problem isn't with Sebela's script, but with the positioning of the issue. As a sequel to Prometheus, it seems to function naturally, but as a #1 issue it is almost impossible to appreciate.

Artist Ariel Olivetti provides some interesting work with the predators. Their language is not translated, being presented instead as a series of triangular lines. All of their actions rely on visual storytelling and Olivetti succeeds in providing them with thoughts and motivations. As they hunt xenomorphs and humans on board the ships, every action they take has a clearly discernible connection of cause and effect. In fact, the predator hunting party is the sole part of this story that is understandable based only on the context of this issue.

Olivetti's work wavers in quality when it comes to humans and other creatures though. His depictions of humans are generic in quality and there are times when it is easy to confuse or forget who certain characters are. Elder, a distinctive individual in his bizarre appearance, undergoes slight changes in design throughout the issues.

The failures of this comic seem to lie with marketing or editorial decisions. It is released as a first issue, when it reads as a continuation of another story. It assumes that readers have foreknowledge of characters and motivation, when none is provided. There is no doubt that it will read better when collected in order alongside the rest of the "Fire and Stone" comics, but when read alone it fails to function as a first issue.

*This grade is based on the quality of craftsmanship in this issue. I would not recommend it to anyone who has not read Prometheus: Fire and Stone, but do not want to judge the creators for what was most likely outside of their control.