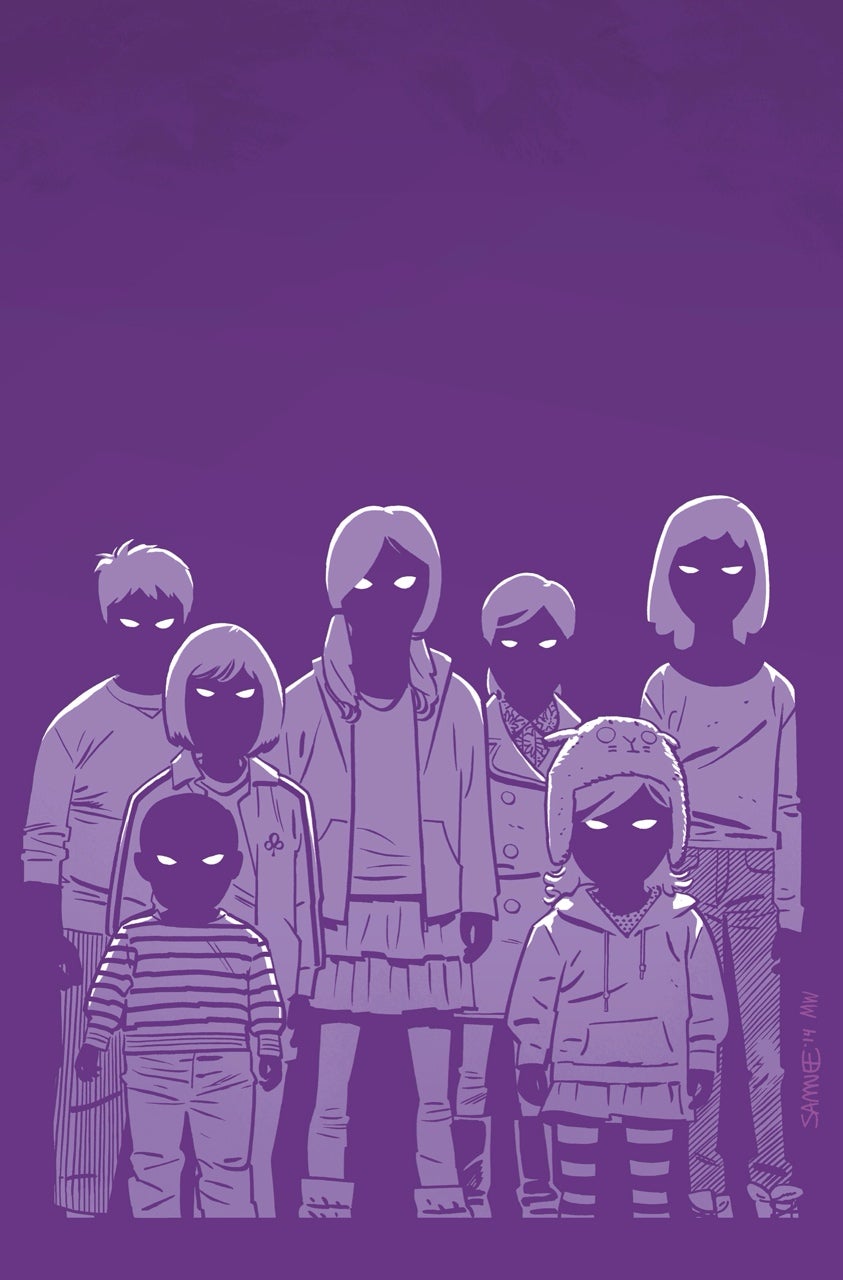 Daredevil villains (excluding Bullseye and Kingpin) typically receive short shrift. What do folks like The Owl and Stilt-Man have compared to the legendary rogues of other vigilantes like Spider-Man or Batman? Mark Waid and Chris Samnee may have taken this attitude as a personal challenge. Daredevil #8 features the return of the Purple Man, a classic Daredevil villain, and it is shocking.  In a brief twenty pages, Waid and Samnee transform the Purple Man into one of the most terrifying villains I've read in superhero comics in years. Spider-Man has nothing on this.

The opening sequence is absolutely chilling. It starts by presenting a single mother and her child as a group of white-eyed children break into their home. The Purple Man is revealed as the ringleader and what he does to both the child and his mother is horrific. It's not over-the-top or particularly gruesome. It is simply terrifying and tragic to think about.

The way in which this sequence is told shows why Waid and Samnee share the "storytellers" credit. Samnee along with colorist Matthew Wilson provide much of the complicated interactions through images alone. Mind control and familial connections are not easy concepts to convey in a few brief panels. Yet the most complex ideas are all explained without any narration. Samnee applies a halo effect in order to convey the mental abilities of one of the assailants, and then replicates it to create a cause-and-effect connection.

Joe Caramagna deserves credit as well for the touches of purple in both dialogue and sound effects. He crafts similar connections of causation in a subtle, yet easily read manner. The excellent grasp of visual storytelling is what makes this sequence so effective because it does not need explained. The horror presents itself through the art as an undeniable force.

This first sequence sets a mood to which the rest of the story slowly returns. It acts as a prologue of sorts warning the reader where this plot will lead. Waid understands that the kind of darkness presented at the beginning is a drastic tonal shift from the typical optimism of his and Samnee's Daredevil. He is conscious of the tone of the issue and works to transition smoothly between the swashbuckling life of Matt Murdock back into the dark web of the Purple Man.

There is still a lot of fun and joy to be found in Daredevil #8. Romantic entanglements, new introductions, and a trip to the zoo all make for lighter fare to help breakup the dark end caps of the issue. Waid is able to capably introduce small changes and new sub-plots in this lighter interlude without slowing the pace of the story. He uses humor and applies Daredevil's abilities in atypical manners to keep the story engaging. No matter what Daredevil is doing, even meeting his girlfriend's parents, it remains entertaining.

There's only so much space for fun given the start of this issue though. The actions of the Purple Man loom over every panel like Stilt-Man's shadow. When the story comes full circle, Waid and Samnee do not back away from the tone struck in the opening of the issue. Instead, they use the same tools that serve the first five pages so well in order to craft a second sequence that is every bit as chilling. Whatever comes next, it ought to fill readers with equal levels of excitement and apprehension. If there's a lesson to be found in Daredevil #8, it's that any villain can be very bad (in a good way) given the right circumstances.

REVIEW: Daredevil #8 - "Spider-Man Has Nothing On This"