The wait is over: Winter is here. The new Sideshow Collectibles/Hot Toys Winter Soldier sixth scale figure, that is. The newest release in the Movie Masterpiece line boasts a screen accurate costume and a literal arsenal of weapons to take on your entire collection. Let me tell you more!

Packaging: The box is similar to other figures released as part of Captain America: The Winter Soldier series: a photo of the character from the movie against a solid color background. Not as fancy as the Thor: The Dark World packaging, but there's some great design work here. Inside the package is the usual: a nice card with a photo of the figure and a list of the creative team behind it. I've always been big on seeing creators get credited for their work, and Hot Toys has always been good with this. 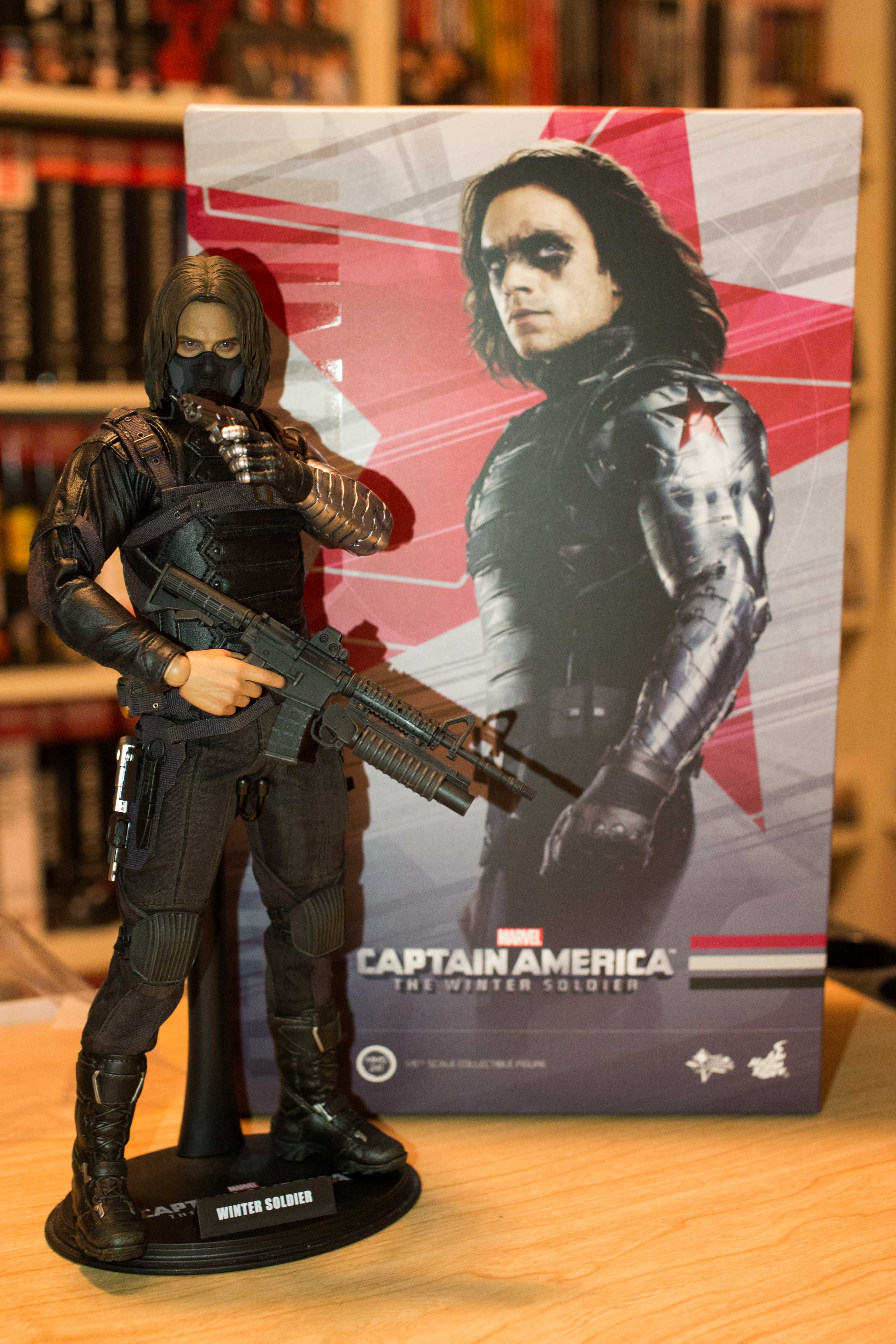 Aesthetic: The Sideshow Collectibles/Hot Toys Winter Soldier figure is amazing to look at. The figure comes with two portraits, one masked, the other one unmasked. The unmasked portrait bears the full likeness of actor Sebastian Stan, looking intense and ready to make the kill. Even the masked portrait, which only shows the upper half of his face, can't be mistaken for anyone else. 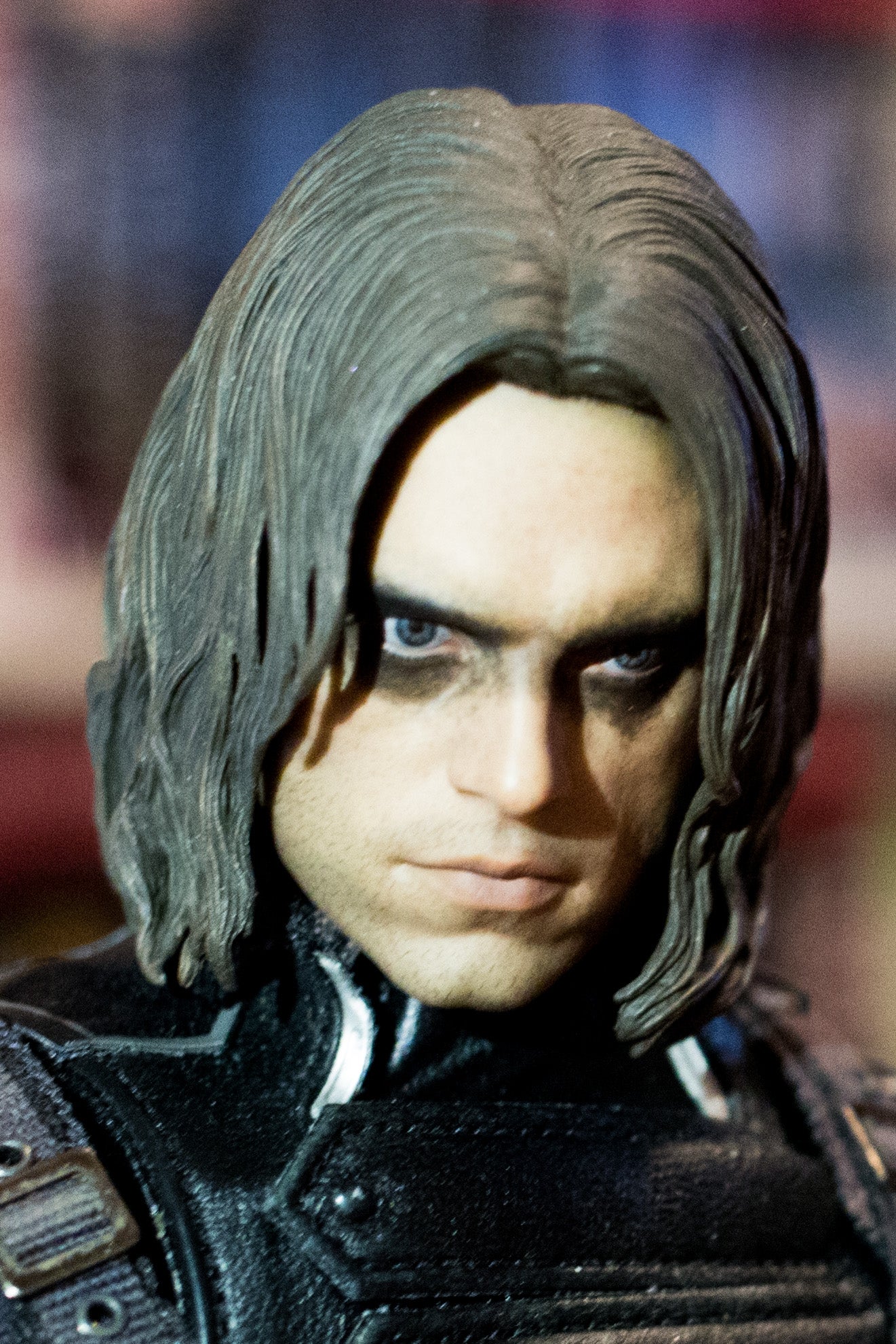 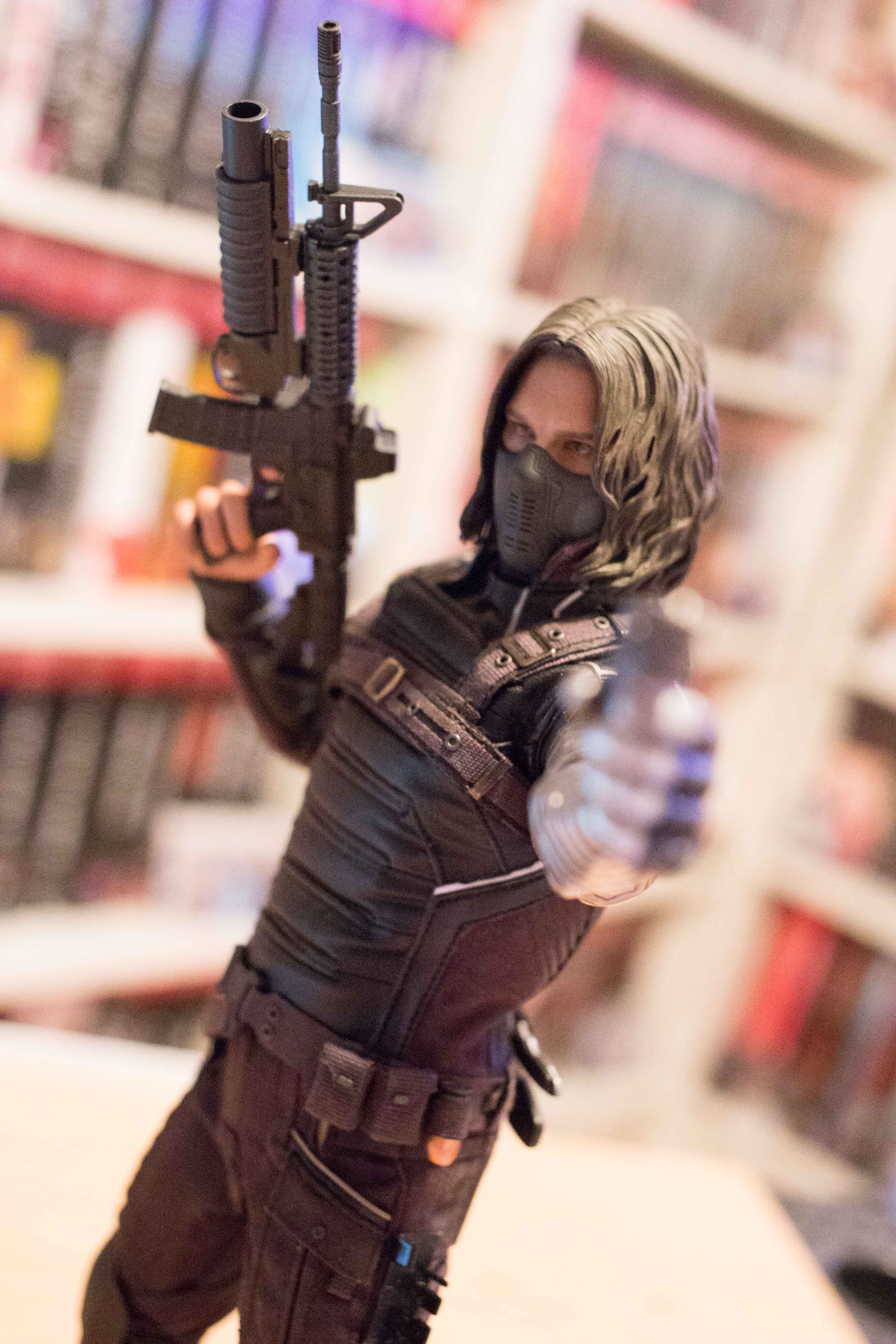 The costume is one of the most detailed I've seen, with fragments made of different types of cloth, with all the appropriate buckles and straps and holsters for his weapons. Of course, it's not the cleanest looking outfit, it looks battle-worn, which adds to the realism. His metal arm looks as it should, intricately sculpted with the many ridges and separations indicating moving parts, and the trademark red star above the bicep. 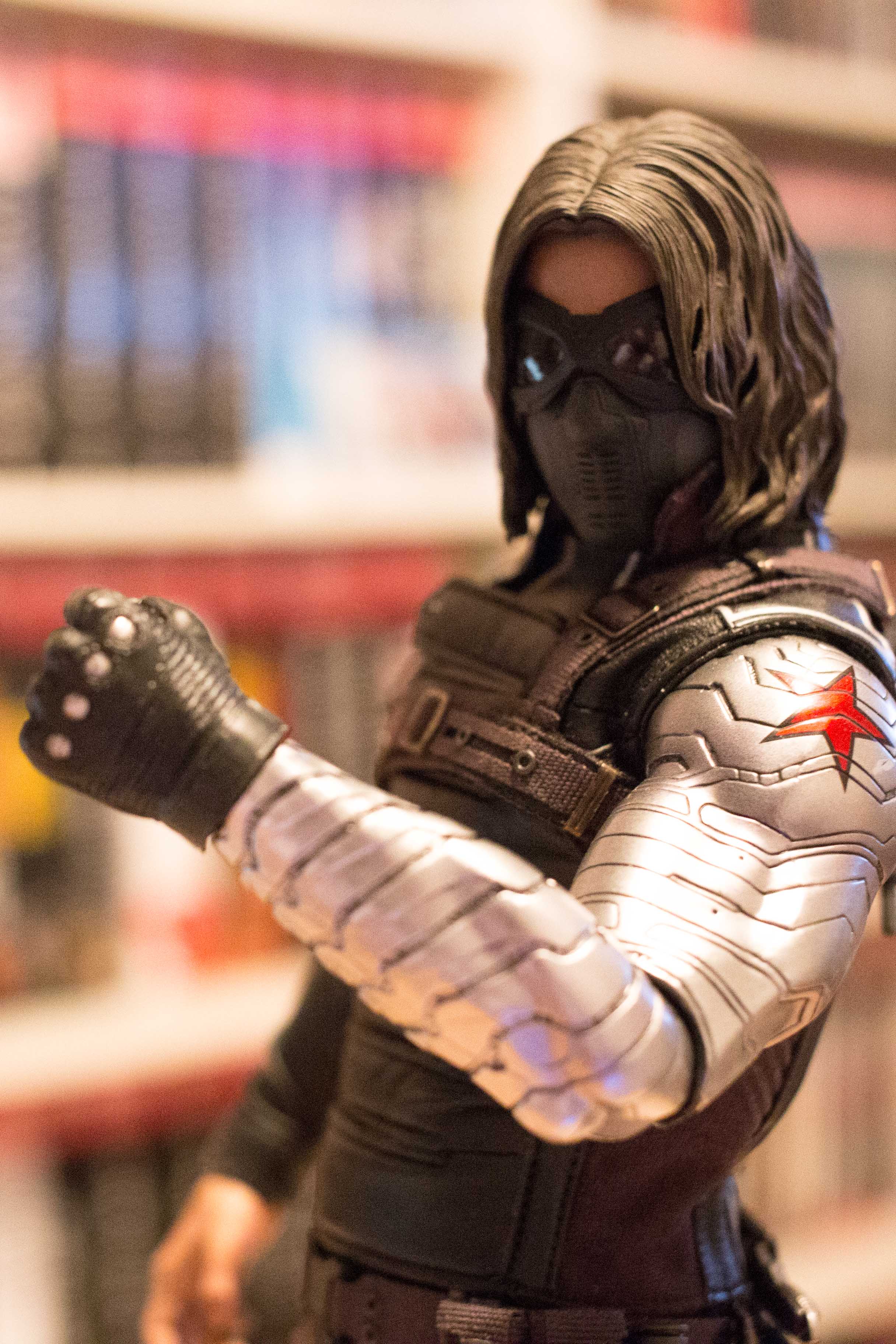 The figure comes with an array of guns and knives that all fit into his costume through various sheaths and holsters which are all a perfect fit. I would advise caution upon handling the figure once you holster the smaller weapons, since you technically snap them on to his sides. 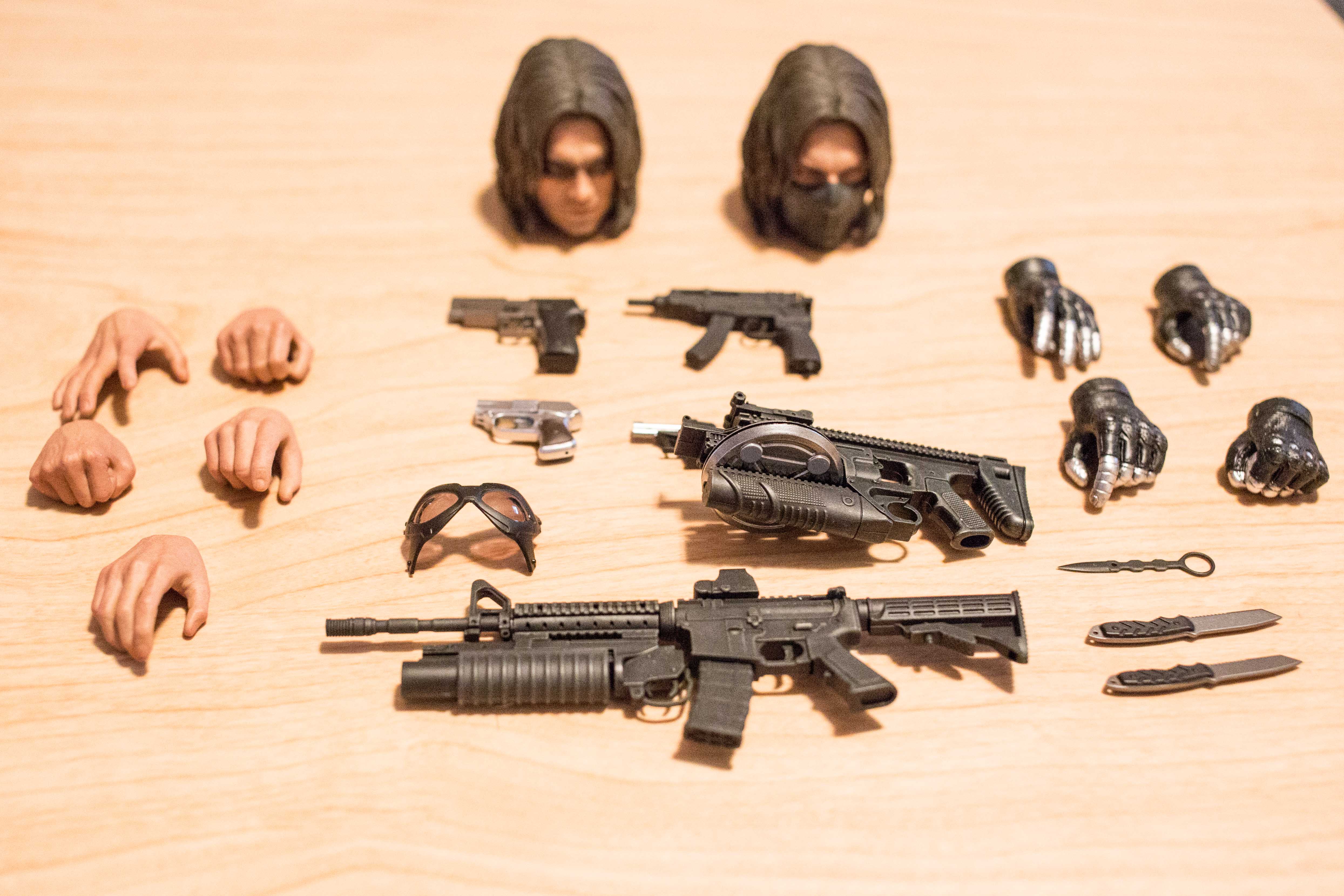 Posability: The figure is articulated enough that you can replicate most if not all of his famous poses. You can also recreate some of the films iconic fights scenes with a Dynamic Figure Stand. The many different interchangeable hands and fists serve to enhance these poses…you can even stage that moment where he catches Cap's shield! 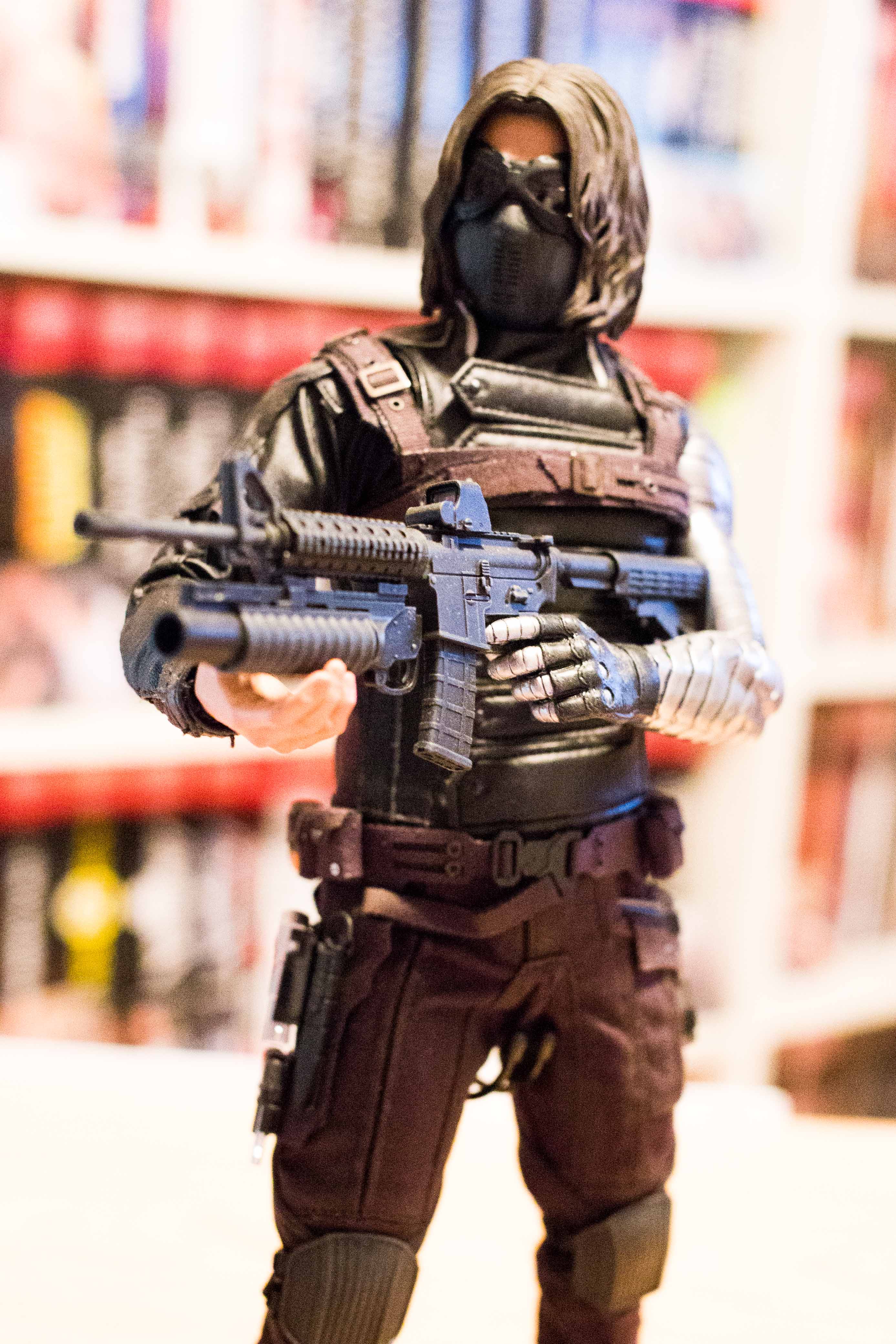 Overall Value: The Hot Toys Winter Soldier figure is a must for any Cap or Marvel fan who just so happens to have the wallet for it. This figure is quite possibly one of their finest achievements yet. It's the best $239 you can spend.