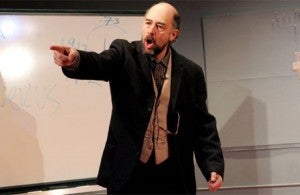 on Monday that Emmy Award-winning actor Richard Schiff has joined the cast of Zack Snyder's Superman reboot Man of Steel in the role of "Doctor Hamilton." Given Snyder's status as a comics aficionado and the character's history on numerous TV shows, it's probably safe to assume that MTV's Splash Page was right when naming Professor Emil Hamilton as the most likely candidate to be played by Schiff. Before he was revealed to be the villain Ruin, Emil Hamilton was a S.T.A.R. Labs scientist who helped Superman for many years on any number of cases. He's memorable to many '90s comics fans as the man whose DNA tests confirmed the Cyborg Superman as definitively the "real" Superman shortly after The Reign of the Supermen! began. The character first appeared in The Adventures of Superman #424 in 1987, and was created by Marv Wolfman and Jerry Ordway. Hamilton wasn't revealed as a villain until 2004, so it's likely that any film version of the character (like the TV versions that came before) will focus on his helpful side, as the MacGyver-like professor who, among other things, helped Superman come to terms with the nature and scope of his powers. Schiff's most notable role was undoubtedly that of Toby Ziegler, the White House Communications Director for most of the run of Aaron Sorkin's The West Wing. Considering that he'll be dealing with spacemen in Man of Steel, it's probably wise for him to take care; Toby lost his job after a scandal involving a secret Department of Defense space shuttle system. In the post-Crisis on Infinite Earths continuity, Superman first appears after saving just such an experimental military "space plane" from disaster.