Rick and Morty character designer and art director James McDermott has posted concept art he created for characters and backgrounds that he created for "Mortynight Run," the second episode of Season 2.

Head down to our slideshow to view McDermott's character designs for Krombopulos Michael, an unused pimp named Krootch, a Garblovian, and Fart.

The episode begins with Rick teaching Morty how to fly his spaceship. Rick then receives a message from Krombopulos Michael (voiced by Andy Daly), an alien assassin who wants the drunken, mad scientist to sell him an antimatter gun. Before heading off to go conduct business, Rick is startled -- though he's the only one -- to learn that Jerry has been in the backseat the whole time. Not wanting to take the unwanted and annoying stowaway on the adventure, Rick drops off his son-in-law at Jerryboree, a daycare owned by an alternate Rick and specifically designed for Jerries.

Rick then meets Krombopulos Michael in a shady garage. And after completing their deal, Morty gets upset with his grandfather, telling him how wrong it is to sell weapons to murderers. Morty also doesn't appreciate that Rick is using his dirty money so that they can go play videos games at Blips and Chitz.

After a traumatic experience playing "Roy: A Life Well Lived," Morty leaves Rick to the play the game and heads off to try and stop Krombopulos Michael from killing his target. Not having mastered the ship, Morty accidentally crash-lands on top of Krombopulos Michael, killing the killer. However, he does free Krombopulos Michael's target, Fart (voiced by Jemaine Clement), a gaseous, telepathetic alien.

"This episode was so jam packed with really fun designs," wrote McDermott. "The first two pieces are rough concept drawings I did of a shady space garage that Rick sells his anti-matter gun to Krombopulous Micheal. I wanted to give it a wet and steamy mood to it, and for the final version the color team took it another 10 steps and really made it look amazing.

"I did quite a few rounds on everyone's favorite assassin, [Krombopulous] Micheal, who 'just loves killin' played by Andy Daly. These were my favorite 5 out of like 40 before his color was finalized." 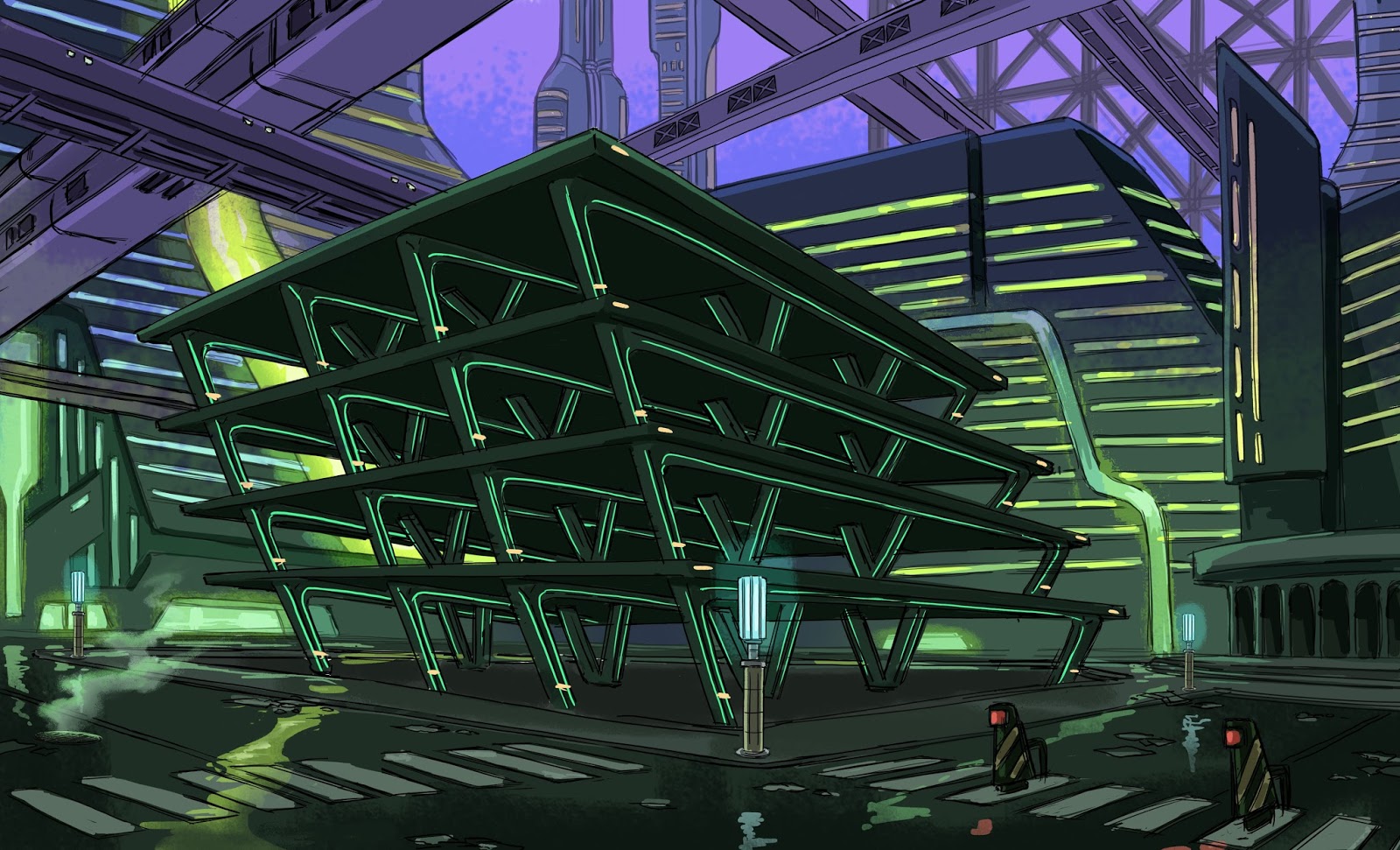 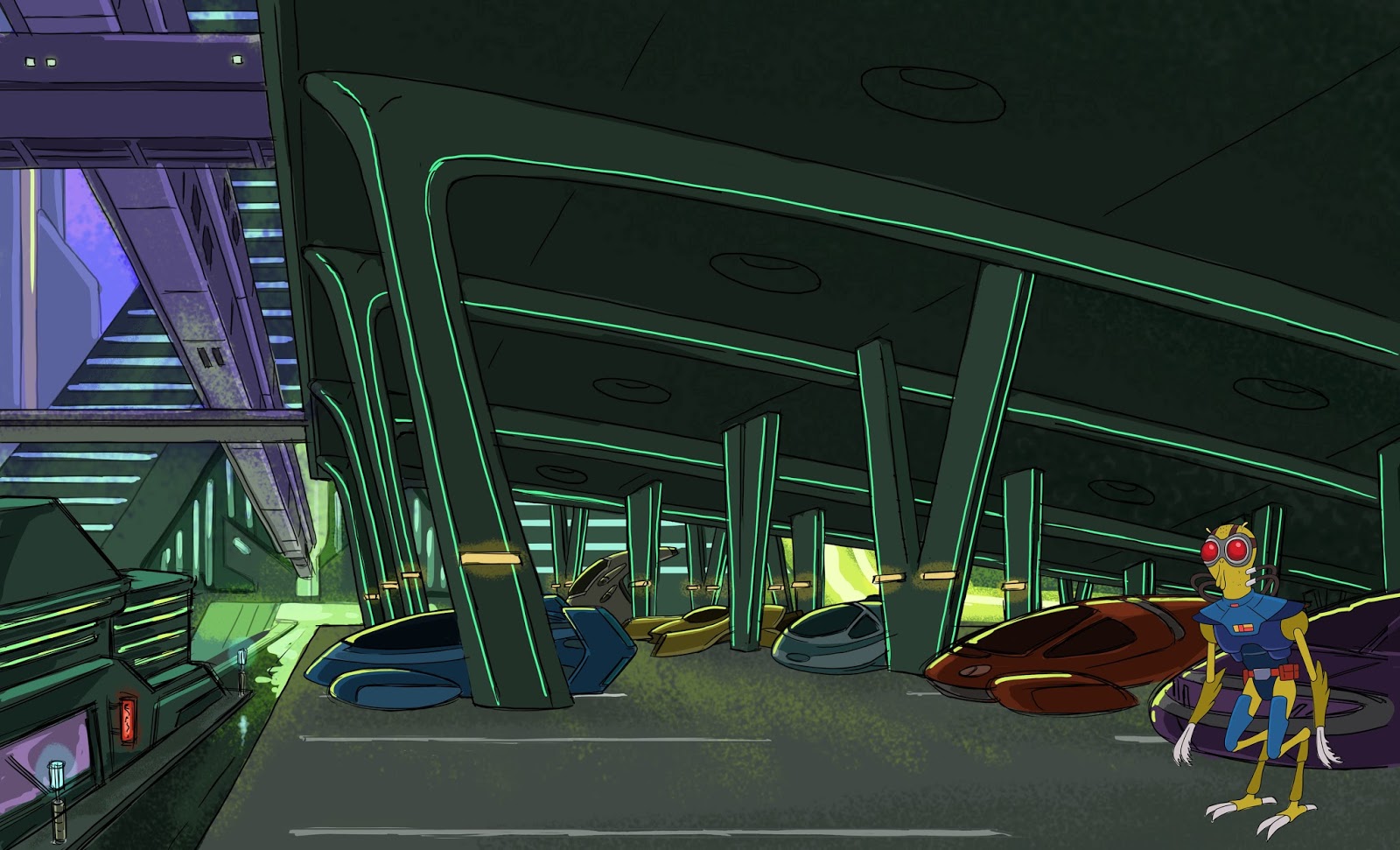 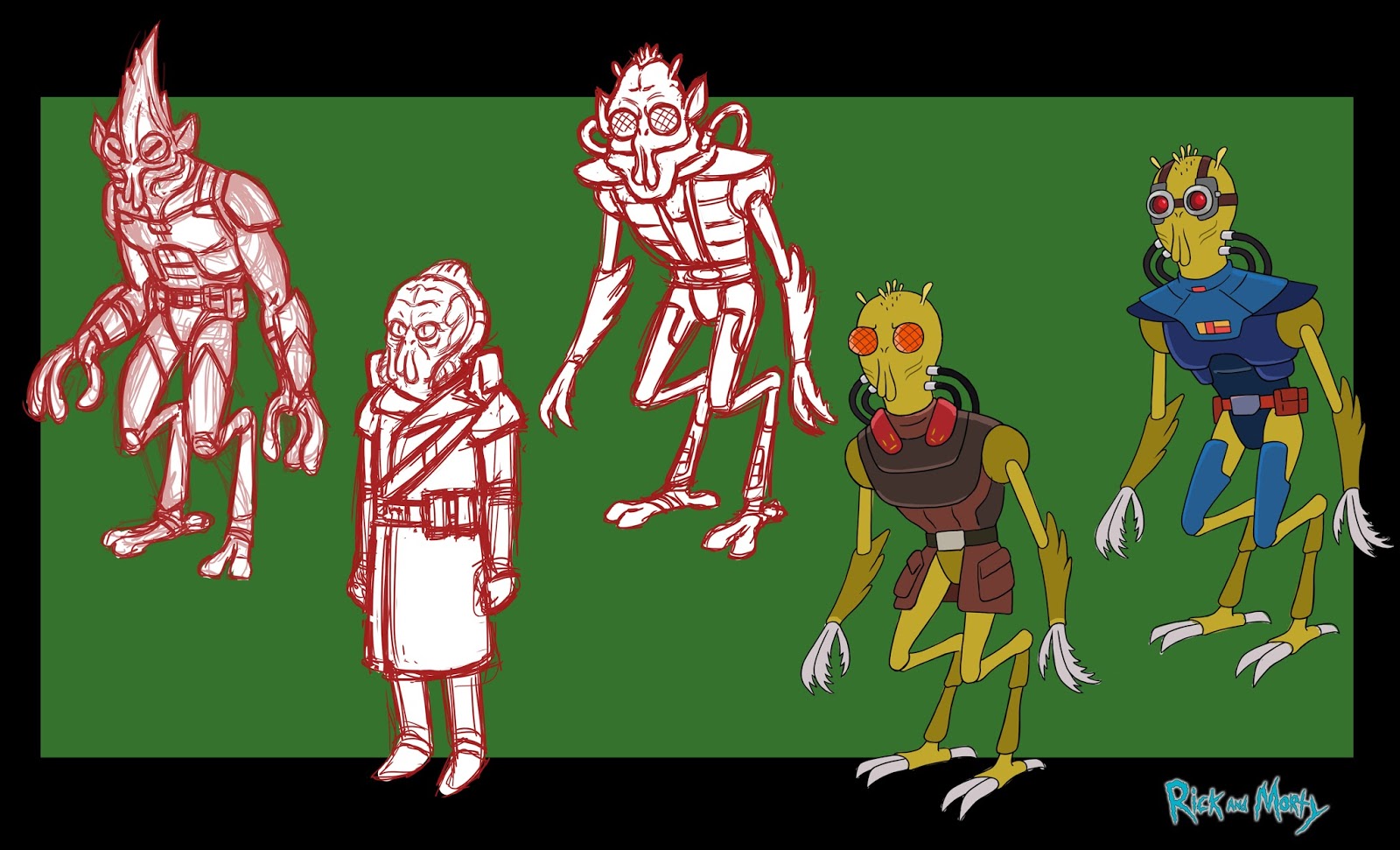 "The next two are roughs of a character that got scrapped from the episode," McDermott explained. "Krootch, an alien pimp that tries to trick out Jerry as he's walking around Asteroid City lost and confused trying to find his way back home. It was a funny bit but Harmon felt like the stakes needed to be higher and make the environment scarier and unpredictable to terrify Jerry more.

"Next, are some sketches for the Garble alien (a.k.a. Garblovian) who was a throw away character I did as a redline from season one that Justin and I always loved and wanted to find a way to get him into the show for season two. I didn't realize how much it would get used this season, but it was awesome to see it make an appearance in our Simpsons couch gag and a version of them as handmade puppets for a live action promotional ad for the show." 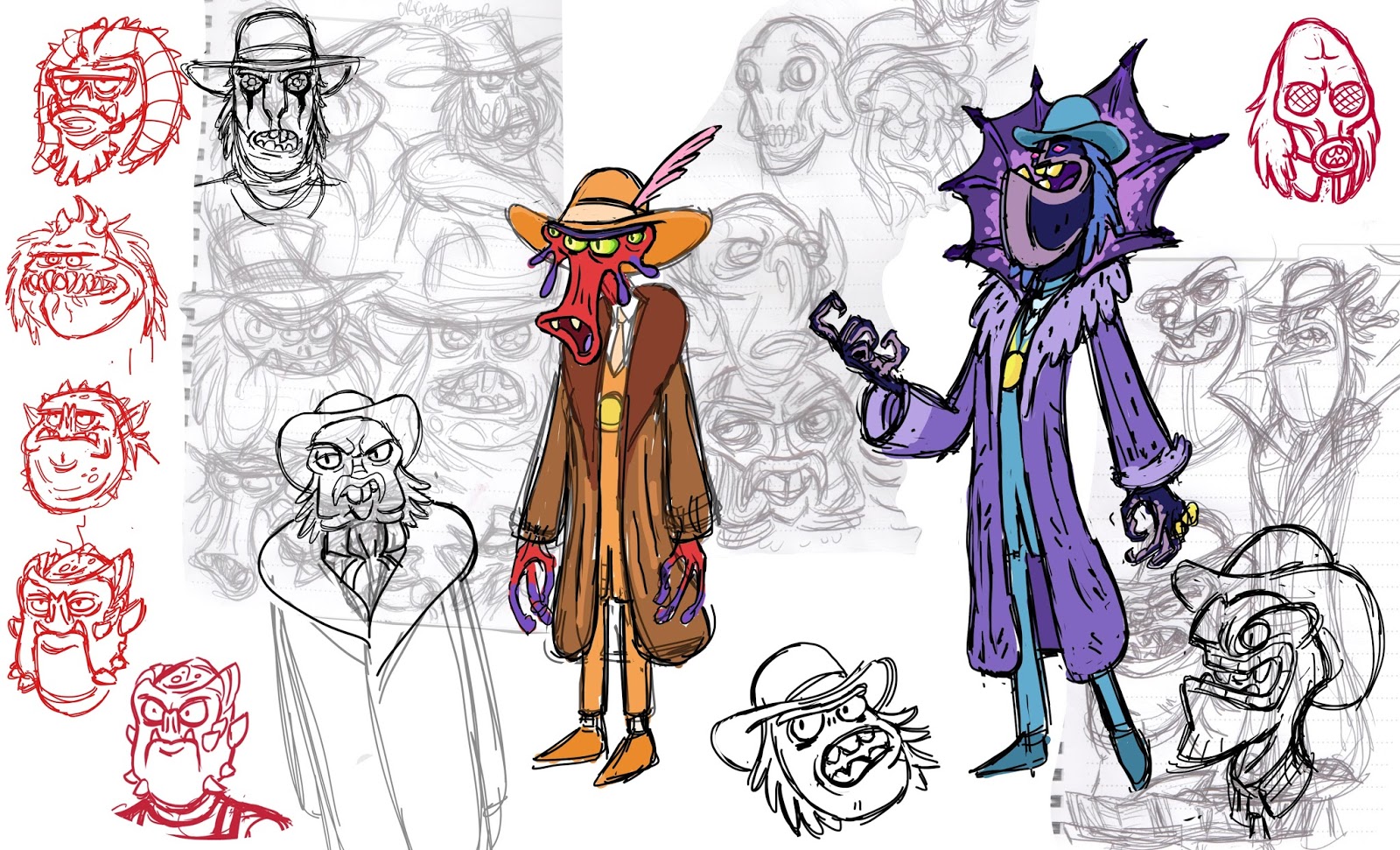 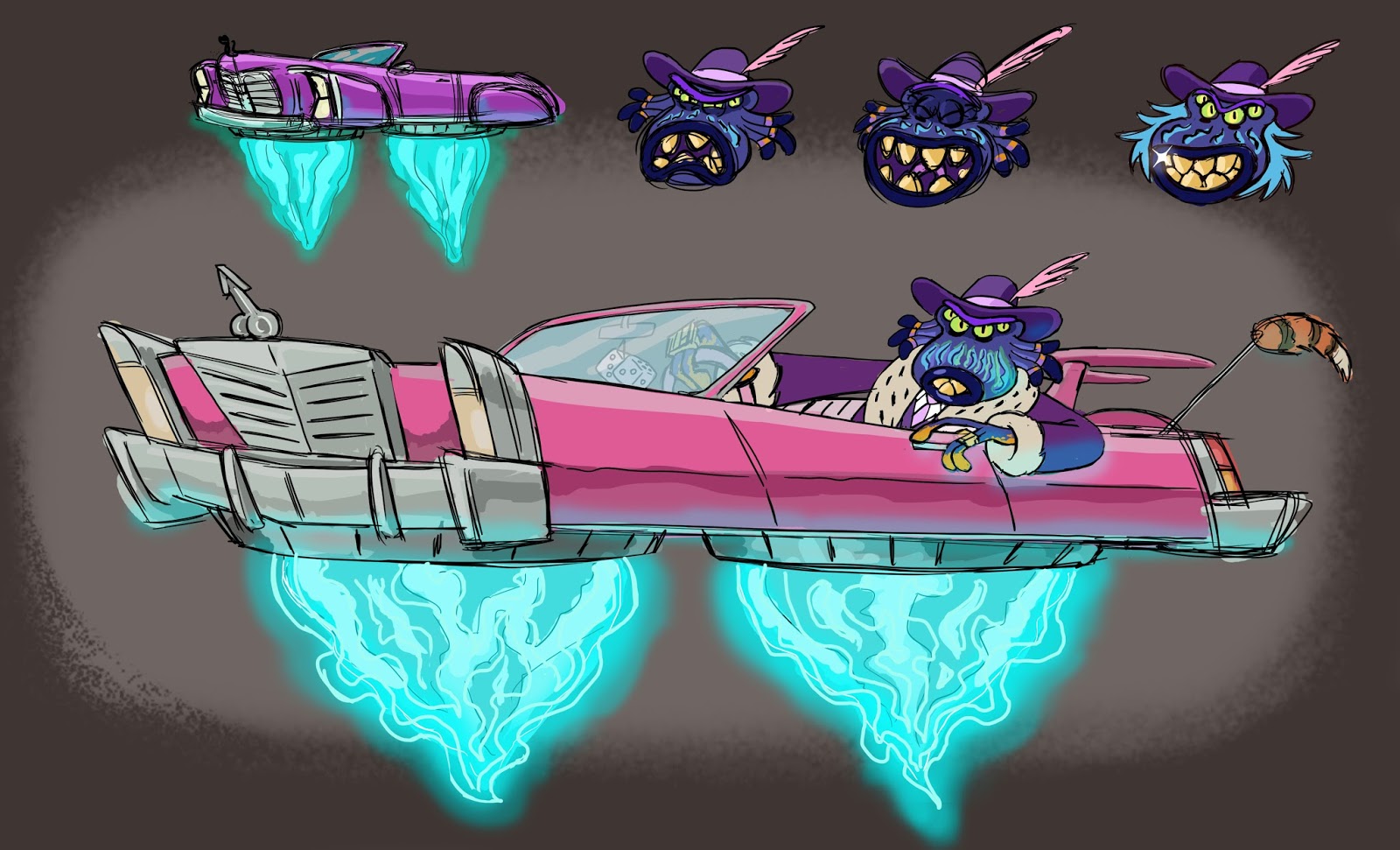 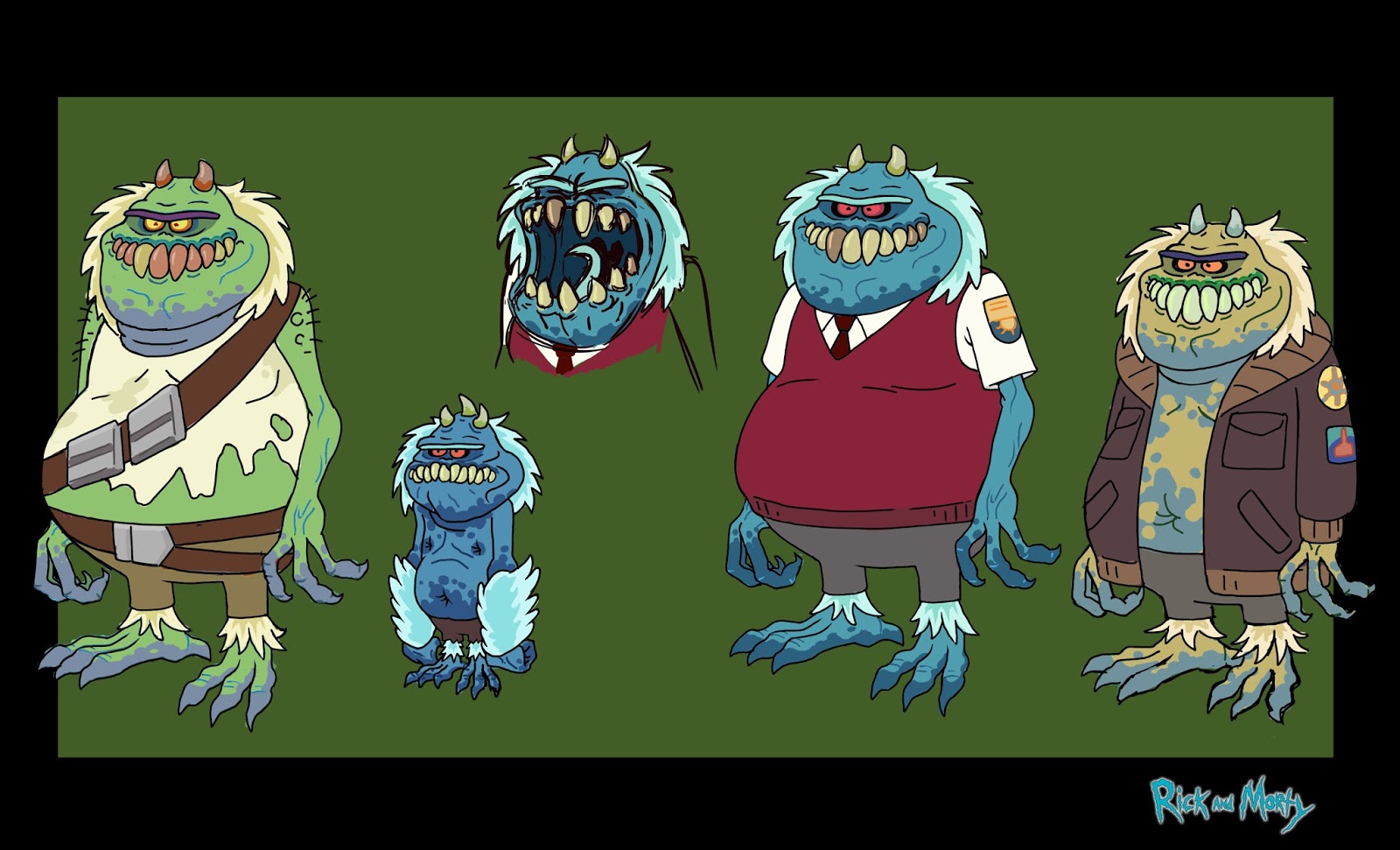 "Next, is my second pass on the Jermaine Clements character, Fart of course," McDermott said. "Loved the way it seeped in and out of tight spaces....brrrrrraap! Lastly, my first rough of Gear City focuses on Gearheads garage. Justin wanted to have a mix of bright plastics with greasy gears and I tried to give it many chasms below the surface level so there were a lot of options for the ship chase sequence to dip and weave in and out of levels of gears and piping." 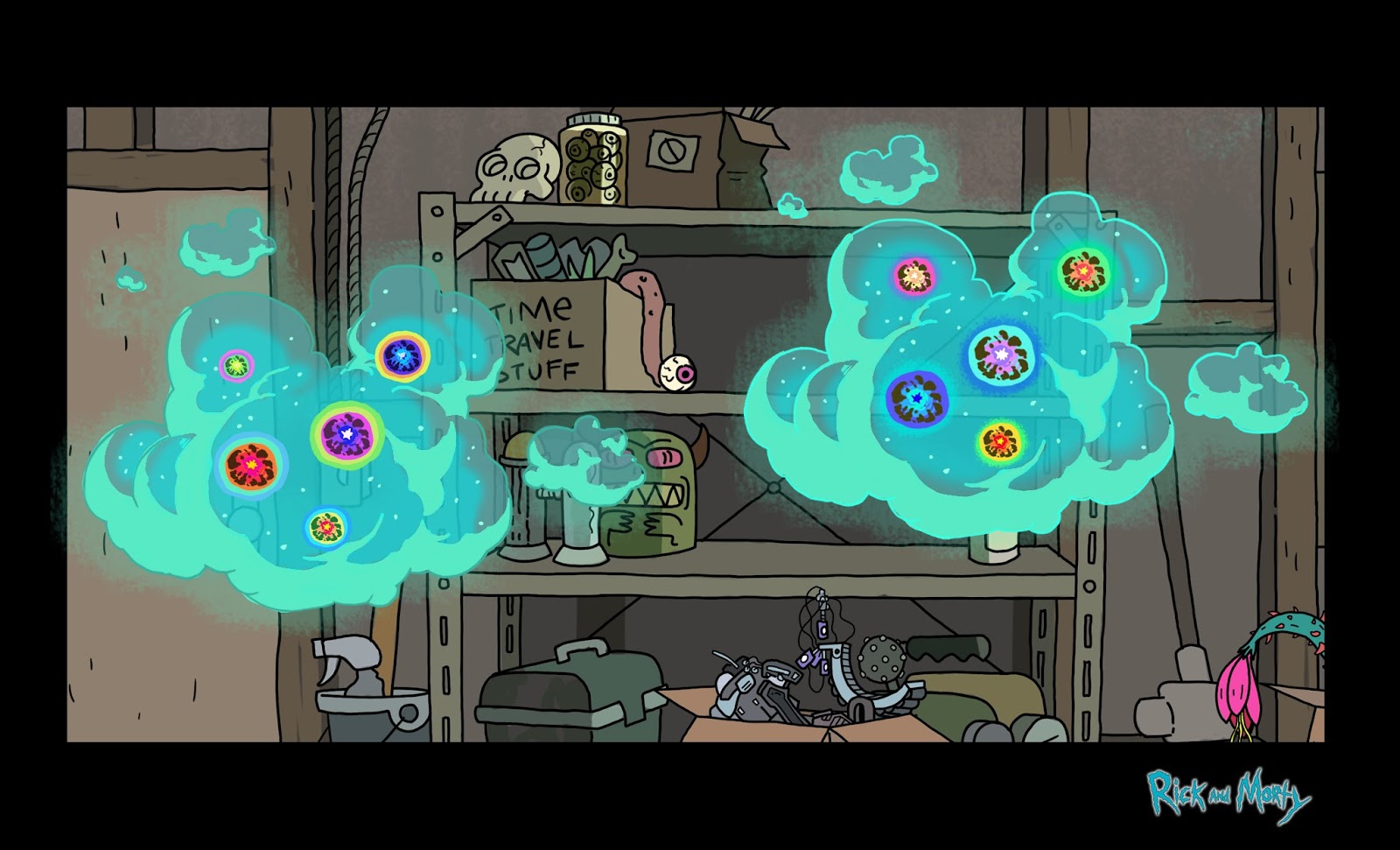 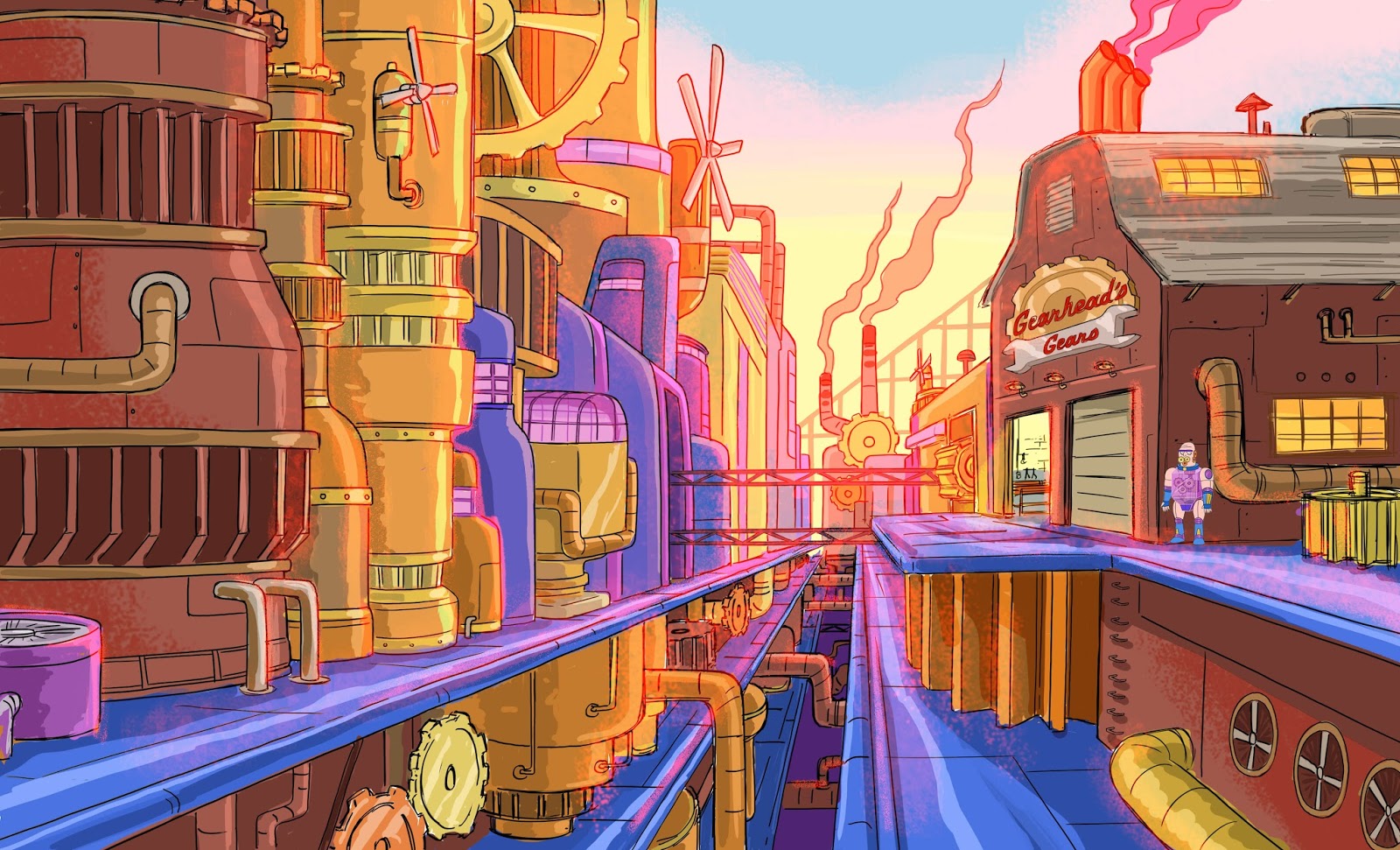 Rick and Morty is Adult Swim's most scientifically accurate animated comedy. Created by Justin Roiland and Dan Harmon, it catalogues the bizarre misadventures of a bored scientific genius/drunkard and his socially awkward grandson, Morty. Their exploits tend to have unintended consequences for Morty's dysfunctional family, especially his unfailingly mediocre father, Jerry. Watch Rick and Morty battle everything from interdimensional customs agents to Cronenberg monsters.

The cast features Justin Roiland as both Rick Sanchez and his grandson, Morty; Sarah Chalke as Rick's daughter, Beth; Chris Parnell as Rick's son-in-law and Beth's husband, Jerry; and Spencer Grammer as Rick's granddaughter and Beth and Jerry's daughter, Summer.

Rick and MortySunday at on Cartoon Network

John Carpenter's The Thing Returning to Theaters for 40th Anniversary

Stranger Things Season 4 Review Roundup: What Did the Critics Think?