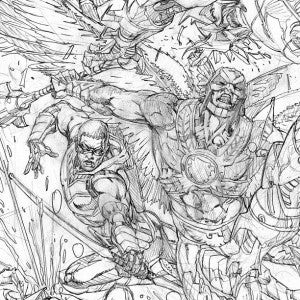 Writer/artist Rob Liefeld may have told his Twitter followers that he's leaving mainstream superhero comics soon (a statement he's now walked back a bit, tweeting today that it's "not at all official"), but that hasn't stopped him from promoting his upcoming DC work.

Earlier today, he tweeted a drawing of Green Arrow and Hawkman, apparently drawn by The Savage Hawkman ongoing artist Joe Bennett, which he describes as "A glimpse of Hawkman:WANTED epic that starts in the fall."

The writer, who took over The Savage Hawkman, Grifter and Deathstroke following the cancellation of his Hawk & Dove, was one of the founders of Image Comics in the early 1990s; his current time at DC is the closest he's had to a stable, long-term relationship with one of the "big two" publishers in a while, and he seems remarkably upbeat about all three of the titles he's working on (he writes and draws Deathstroke, and writes the other two).